by Robin Phillips –
The pattern of persecution is being repeated in Syria as Muslim rebel groups seek both to overthrow the lawful government as well as to eliminate the native Christian population. Consequently, Christians in Syria are frightened to worship publicly and many have had to flee to refugee camps in neighbouring countries. …

The equilibrium in Syria began to be disrupted after the, so called, ‘Arab Spring’ hit the country in 2011. Rebel groups, many of whom have links to Al-Qaeda, began seeking to overthrow the government. Syria’s Christian population became engulfed in the crossfire of this civil war. Because most Christians in Syria have remained neutral in the two-year civil war and some have supported the government, the insurgents with the ‘Free Syrian Army’ perceive Christians as enemies. Consequently, they have begun systematically confiscating land belonging to Christians, in addition raping women and killing children. Dozens of churches have also been desecrated or completely destroyed, mainly around Homs and Aleppo.

Astoundingly, the anti-government ‘Free Syrian Army’ is considered moderate by the West and is supported by the David Cameron, the Obama administration, NATO and [Read more…]

by Orthodox Patriot –
These past couple of days have confirmed what many conservatives and other critics (including some liberals) have been saying about Obama and his cronies for years. Obama is not only a narcissistic socialist hypocrite and a pathological liar, but it appears he is also corrupt and incompetent at the same time. This is not just hyperbole, but an objective assessment of the damning facts and uncontested evidence that has been revealed so far.

The many dangers such an individual poses to the United States of America and all citizens cannot be underestimated. As Michael Goodwin from the New York Post cautions in his editorial, the “ultimate danger is a lack of accountability. The idea that ordinary citizens hold the power has no meaning when the political class circles the wagons and the press looks the other way while the president accumulates more power and control.”

by John Hayward –
The despicable ad put together by pro-Obama Super PAC Priorities USA has disintegrated into the most noxious cloud of lies, with astonishing speed.  Rarely have the waters of the political gutter washed away sewage so quickly.

Astonishingly, all three of the broadcast “news” networks managed to avoid mentioning yesterday’s biggest political story.  NewsBusters notes that NBC anchor Brian Williams droned on about “both sides getting personal”… without bothering to mention that only one side was accusing the opposing candidate of murder.

But CNN tore the Priorities USA ad to shreds, with anchor Wolf Blitzer pronouncing it “full of falsehoods.”  [Read more…] 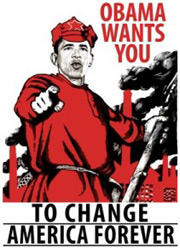 by Steve McCann –
The United States, faced with its worst crisis in 65 years, has at the helm a radical political class, as personified by Barack Obama, who have chosen a path trod by so many despots in mankind’s recent history. Barack Obama and his fellow-travelers are exploiting the fear and desperation of a growing number of citizens amid gaping fissures in American society in order to retain and expand their control over the populace.

Human societies are held together by the most fragile of cords. Whenever unrelenting internal or external challenges abound, thereby placing excessive stress on the foundation of any society, the key determination as to whether chaos ensues is most often in the hands of the society’s leaders. They can choose to exploit the circumstances in order to satisfy their lust for power, or they can embrace a course of action and policies to rally the citizenry into collectively overcoming the crisis at hand, regardless of the fractures in that society.

American society is no longer the cohesive and determined entity that accomplished so much over the past centuries; it is extraordinarily susceptible to manipulation by unscrupulous ideologues. [Read more…] 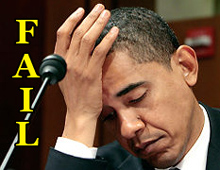 President Obama achieved the historic downgrading of America’s credit rating the old-fashioned way. He earned it.

He came into office with federal spending already near an historic peak, with a percent of GDP at 20.7 percent and having increased by one-seventh during the Bush years. One year earlier Bush had joined with then House Speaker Nancy Pelosi to enact a pointless Keynesian stimulus package of $168 billion, which the record will show created exactly 0.00 jobs, and stimulated nothing but national debt.

Send In the Clowns
Barack Obama​ surveyed the continuing wreckage of the financial crisis, and decided to follow the advice of the reknowned economist Otter, “who famously said in ‘Animal House​,’ this situation ‘absolutely requires a really futile and stupid gesture be done on somebody’s part,'” as quoted by Andy Kessler in Monday’s Wall Street Journal. [Read more…] 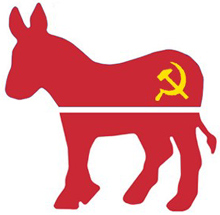 by James M. Thunder –
Democratic leaders and liberal commentators declaim against the Tea Party members of the Republican House and Grover Norquist​ for the no-new-taxes pledge to which many Republican Senators and House members have subscribed and have promised their constituents in return for their vote. They are lambasted for their “extremism” in the debt ceiling debate. How convenient for the Democrats to be able to point to specific targets of their wrath.

If President Obama is to be believed, health care is a dwindling, finite resource that must be rationed. According to Obama, quality health care for some deprives the less fortunate of quality care. The only good health care in Obama’s worldview is that which is “redistributional.”

So says Dr. Donald Berwick, Obama’s new health care czar, appointed to oversee the distribution of $800 billion worth of benefits payments. This mostly means denying life-extending treatment to seniors, in practice. Of course, Obama lacks the constitutional authority to appoint an individual with this kind of authority without Senate confirmation, but using the “recess appointment” ruse, shocking even Democrat senators, Berwick now holds vast power over who gets what medical treatment.

But no matter. Obama has decided. Illegality has not stopped other contentious Obama appointments. Obama does what he wants, when he wants, regardless of his sworn oath to uphold the U.S. Constitution. [Read more…]

I’m not easily shocked. I’ve been a therapist for a couple of decades not just anywhere, but in the leftest place around. But still, when I received a flyer in the mail last week, it absolutely stunned me.

The flyer announced a conference for children and teens, age 13 to 18, by a group called Gender Spectrum. The advertisement reads as follows:

Thanks to the attention from Glenn Beck, a recent top seller on Amazon.com is Austria’s Friedrich Hayek’s The Road to Serfdom. The book was written in 1944 to fight the drift from individual freedom and free-market competition to a growing dependence on economies controlled by central planning authorities. To Hayek, Stalin’s Soviet Russia was no better than the Nazi “National Socialists.” In all its forms, the increasing spread of socialism has and would always be a threat to individual freedom and economic progress.

Hayek’s book remains a wakeup call to apathetic citizens who take for granted that the improvements achieved through democracy, individual freedom and capitalism have been “acquired once and for all.” Hayek knew what history confirms; freedom must be earned and reearned in every generation. [Read more…]

6/7/2010 – Connie Hair –
Documents released Friday from the Clinton library, along with memos from her time as clerk for Supreme Court Justice Thurgood Marshall, reveal Elena Kagan as someone far to the left of the mainstream of political thought in America.

Over 46,000 pages of the nominee’s paperwork produced during her service in the Clinton White House were released from the William J. Clinton Presidential Library.

“From issues such as guns to abortion to crime control, Kagan’s memos unambiguously express a leftist philosophy and an approach to the law that seems more concerned with achieving a desired social result than fairly following the Constitution,” said Sen. Jeff Sessions, top Republican on the Senate Judiciary Committee. “Ms. Kagan’s record is exceptionally thin. She has never been a judge and only practiced law for a brief period — spending much of her career as a liberal advocate.” [Read more…]

For as long as the political fight took over the past year, the abbreviated review process on the health care legislation currently pending on President Obama’s desk is unquestionably going to result in some surprises — as happens with any piece of mashed-up legislation — both for the congressmen who voted for it and for the American people.

One such surprise is found on page 158 of the legislation, which appears to create a carveout for senior staff members in the leadership offices and on congressional committees, essentially exempting those senior Democrat staffers who wrote the bill from being forced to purchase health care plans in the same way as other Americans. [Read more…]

The United States of America is great for a number of reasons. Its commitment to liberty, dedication to charity, defense of its friends and freedom around the globe, historical reliance on the individual and on free markets, and in my opinion, national reverence for the Almighty, are among those things that make our nation the greatest the world has ever known.

But perhaps second only to our collective Faith in God – our commitment to the rule of law sets us apart and serves as the foundation for our strength and prosperity. One need not look any farther than our southern neighbors in Mexico to see what the world looks like when the rule of law is abandoned. [Read more…]

A new documentary, Oral Sex Is the New Goodnight Kiss, chronicles America’s moral decay. Sharlene Azam, a Canadian filmmaker, says, “If you talk to teens [about oral sex], they’ll tell you it’s not a big deal. In fact, they don’t consider it sex. They don’t consider a lot of things sex.” In the documentary, teenage girls talk casually about their sexual experiences and even their forays into prostitution.

One girl sums up the new attitudes: “Five minutes and I got $100. If I’m going to sleep with them anyway because they’re good-looking, might as well get paid for it, right?” [Read more…]

The name “liberalism” has now drifted so far from its moorings that it has turned into a lie. Anybody who uses “liberal” these days is trying to put one over on you. It’s like Florida swampland peddlers talking about their “beautiful lakeshore.” You can stop listening at that point, because nothing you’re going to hear is true. Liberalism used to mean something. Today it’s pure Florida swampland, complete with snapping alligators. [Read more…]