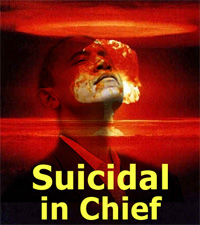 by Bill Gertz –
Lowest level of strategic review would leave Pentagon with fewer warheads than China
President Obama has ordered the Pentagon to consider cutting U.S. strategic nuclear forces to as low as 300 deployed warheads—below the number believed to be in China’s arsenal and far fewer than current Russian strategic warhead stocks.

Pentagon and military planners were asked to develop three force levels for the U.S. arsenal of deployed strategic nuclear warheads: a force of 1,100 to 1,000 warheads; a second scenario of between 700 and 800 warheads; and the lowest level of between 300 and 400 warheads.

A congressional official said no president in the past ever told the Pentagon to conduct a review based on specific numbers of warheads.

“In the past, the way it worked was, ‘tell me what the world is like and then tell me what the force should be,’” the official said. “That is not happening in this review.”

The plan for a radical cut in warheads is contained in a review of nuclear weapons ordered by the president in an August directive. The review called the Nuclear Posture Review Implementation Study is nearing completion and could be presented to the president as early as next month.

The plan has come under fire from senior military officers in charge of maintaining nuclear deterrence against Russia, China, and future nuclear rogue states.

Asked about the opposition, a senior officer involved in strategic arms declined to comment.

Critics of the nuclear force cuts in Congress and the national security community said the force structure is being studied without matching the need for nuclear forces to combat growing threats, as was done in past strategic nuclear reviews.

Currently, the U.S. arsenal includes about 5,000 warheads, many of them slated for dismantlement. Russia has between 4,000 and 6,500 warheads and China is believed to have more than 300.

Pentagon spokesman George Little declined to comment on the specific force levels being examined in the review.

“While the details are classified, the president asked DoD to develop several alternative approaches to deterrence and stability, to include illustrative force size and postures to best support those alternatives,” Little said. “As part of the NPR implementation study, DOD is evaluating these alternatives using policy criteria outlined in the 2010 Nuclear Posture Review.”

John Bolton, former U.N. ambassador and undersecretary of state for international security during the George W. Bush administration, said in an interview that the administration’s plan to cut nuclear force to as low as 300 “alone is sufficient to vote against Obama in November.”

“Congress should urgently adopt a resolution rejecting the idea that any of these levels is consistent with American national security,” Bolton said. “Let’s just see who is prepared to support Obama.”

“No sane military leader would condone 300 to 400 warheads for an effective nuclear deterrent strategy,” McInerney told the Washington Free Beacon.

“Going down to 1000 to 1,100 is risky enough and frankly in today’s world, very risky. The purpose of our nuclear force structure is to deter any adversary from even thinking that they could minimize our attack options. Such thinking is very dangerous and will only encourage our adversaries to make bold decisions.”

A congressional official and former administration official familiar with the ongoing review said the bottom level warhead levels raise serious questions about whether a nuclear force that size would deter adversaries. It also would raise questions about so-called “extended deterrence,” the threat to use nuclear weapons against states like North Korea on behalf of allies like Japan.

The new strategic review reflects the president’s 2009 speech in Prague when he said the United States would pursue peace and security in a world “without nuclear weapons.”

In 2010, the administration issued its Nuclear Posture Review that reduced the role of nuclear weapons in U.S. military posture. Then in March, Thomas Donilon, White House National Security Adviser, said in a speech the administration was making plans for “the next round of nuclear reductions.”

Under the U.S.-Russia New START arms treaty, U.S. nuclear forces will be cut to 1,550 warheads.

Rep. Michael Turner, R-Ohio and chairman of the House Armed Services strategic forces subcommittee, said during a hearing in November that he is concerned about planned cuts in nuclear forces.

“The administration reviews are all being done to support further U.S. reductions,” Turner said, “This is concerning.”

U.S. officials say the failure of the United States to maintain a strong nuclear deterrent force would likely lead to other nations developing nuclear weapons.

And South Korea and Japan could decide to develop nuclear arsenals to deter North Korea’s and China’s nuclear forces.

James Miller, deputy undersecretary of defense for policy, told Congress in November that the NPR implementation study, when completed, will result in “more detailed planning guidance to the military, and then [U.S. Strategic Command] will revise its military plans.” The review will also be used for “future arms control proposals,” he said.

Air Force Gen. Robert Kehler, commander of the U.S. Strategic Command, said during the same hearing with Miller that the 2010 nuclear review “validated the continuing need for a triad” of missiles, bombers, and missile-firing submarines.

The administration committed to spending as much as $85 billion over 10 years to modernize U.S. nuclear forces and infrastructure as part of the Senate’s New START ratification debate in 2010.

However, some on Capitol Hill are calling the administration’s commitment to nuclear modernization into question.

Kehler’s predecessor at Stratcom, Gen. Kevin P. Chilton, told a recent congressional hearing that the 1,550 warheads under New START are the lowest level for security and deterrence.

When asked if the New START levels included more warheads than needed, Chilton said: “I do not agree that it is more than is needed. I think the arsenal that we have is exactly what is needed today to provide the deterrent.”

Kenneth deGraffenreid, a former Reagan administration National Security Council official, said in an interview that the plans for sharp nuclear cuts are “part of the administration’s purposeful decline of American military power.”

The damage to nuclear forces is compounded by “massive reductions across the board in defense spending on conventional forces,” he said.

“Defense is the only part of government this administration is reducing,” he said. “There wasn’t a single dollar of stimulus money spent on defense.”