It’s Christmas time but Christmas cheer isn’t abounding as it did when we were kids.

The lack of cheer is not due to the recession (which the mainstream media can’t quit talking about) but because of the myriad atheistic “Grinches” who have made it their life’s goal to steal Christmas. [Read more…]

A public school teacher in Mississippi marked down an eleven-year-old’s Christmas poem assignment and told the boy to rewrite it because he used the word “Jesus,” which, the instructor explained, is a name not allowed in school.

Liberty Counsel, a non-profit organization dedicated to advancing religious freedom, reports that sixth-grader Andrew White of Hattiesburg, Miss., chose to write the poem on the assignment “What Christmas means to me.” After White turned in his rough draft, however, his teacher circled the word “Jesus” and deducted a point from his grade. The teacher then explained that he needed to rewrite the poem without the offending word. [Read more…] 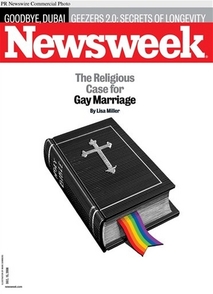 Newsweek magazine, one of the most influential news magazines in America, has decided to come out for same-sex marriage in a big way, and to do so by means of a biblical and theological argument. In its cover story for this week, “The Religious Case for Gay Marriage,” Newsweek religion editor Lisa Miller offers a revisionist argument for the acceptance of same-sex marriage. It is fair to say that Newsweek has gone for broke on this question.

Miller begins with a lengthy dismissal of the Bible’s relevance to the question of marriage in the first place. “Let’s try for a minute to take the religious conservatives at their word and define marriage as the Bible does,” Miller suggests. If so, she argues that readers will find a confusion of polygamy, strange marital practices, and worse. [Read more…]

In the inmates-are-running-the-asylum department, too many cases are popping up to ignore them. Here are a few modest examples:

At the state capitol in Olympia, Washington, Gov. Christine Gregoire (a Democrat, of course), has approved the placement of an atheist sign for public display next to a nativity scene. The sign reads:

“At this season of THE WINTER SOLSTICE, may reason prevail. There are no gods, no devils, no angels, no heaven or hell. There is only our natural world. Religion is but myth and superstition that hardens hearts and enslaves minds. Placed by the Freedom From Religion Foundation on behalf of its Washington State Members.”

Tell that “hardens hearts” nonsense to the millions of Christian believers who have been martyred down through history at the hand of atheist monsters like Stalin and Mao. Personally, I wish I could get a little freedom from the unbelievers who have so totally screwed up life in America. [Read more…]

CHAPEL HILL For as long as anyone can remember, Christmas trees adorned with lights and ornaments have greeted holiday season visitors to UNC Chapel Hill’s two main libraries. Not this year.

The trees, which have stood in the lobby areas of Wilson and Davis libraries each December, were kept in storage this year at the behest of Sarah Michalak, the associate provost for university libraries. [Read more…]

He sat in my office, a Turkish scholar and theologian who helps people who are tortured for their faith. According to Ziya Meral, it’s the converts from Islam to Christianity who are some of the most forsaken on Earth. The police don’t help them; their families hate them; and their friends want to kill them. And some of the worst treatment occurs in the gulags of America’s allies.

“Egypt is one of the worst countries in terms of torture,” Mr. Meral said. “Once you are detained, that’s it. The security services can keep you without charges for six, seven months, and then renew those charges.” [Read more…]

Congratulations, tolerance mau-mauers: Your shakedown of a Christian-targeted dating website worked. Homosexuals will no longer be denied the inalienable “right” to hook up with same-sex partners on eHarmony. What a landmark triumph for social progress, eh? [Read more…]

Several churches have been vandalized by apparent supporters of same-sex marriage since the idea was banned in California last week, local police have reported.

Proposition 8, which defines marriage as the union between one man and one woman, was passed 52 to 47 percent on Nov. 4. Since then, local authorities have reported a protest or vandalized property nearly every day. [Read more…]

Coming to a church near you. Lessons in “tolerance” from homosexual activists who show us just how peaceful, loving, understanding, fair, and unbiased they really are.

This past Sunday, during a Worship Service at the Church, a group of loud and intentionally disruptive homosexual activists stood outside of the sanctuary of Mount Hope dressed in strange pink attire. Using megaphones for amplification, they shouted epithets at those entering the service such as “Jesus is a homo”. They also mockingly carried an upside down pink cross.
[Read more…]