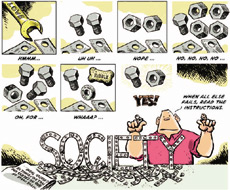 6/7/2010 – Robert Knight –
Sexual morality is over. That’s the conclusion of one of the smartest men in Washington, the estimable columnist George Will. On ABC’s “This Week” on May 30, Mr. Will agreed with colleague Matthew Dowd that apart from a few glitches, homosexuality will soon be a nonissue in the military. They are wrong, but let’s look at their argument.

The men cited young folks’ liberal attitudes and recent polls as evidence that morality is no longer a factor. Mr. Dowd: “It’s long been decided in the public’s mind. I think the Republicans are so far out of step on this…”

Mr. Will: “For people of Matt’s son’s generation, being gay is like being left-handed. … The Supreme Court has a famous phrase it used in some opinion, the evolving standards of decency that mark a maturing society. Clearly these are evolving, and the case is over, basically.”

This plunge into moral relativism could mean that Sodom and Gomorrah had evolved into a more “maturing society” than, say, Jerusalem under King David. Or America under Abraham Lincoln.

Not to be outdone, ABC correspondent Jake Tapper chimed in: “The case is over. But why is there such a fight by Republican officeholders? If you look at polling … the public is overwhelmingly supportive of lifting the ban. Conservatives support it. Republicans support it. White evangelicals support it. What’s going on with the Republicans in Congress?”

This is based on loaded polls by liberal media. But let’s go back to George Will, who gives the answer: “They’re not being very intelligent.”

Ah, that’s it. Those of us who believe that God created male and female and that sex outside marriage – adultery, fornication and homosexuality – is wrong and harmful, are just not being intelligent. It’s apparently not enough to love friends and family who are into homosexuality; we have to love the behavior that threatens their bodies and souls.

The four Joint Chiefs of Staff and the 1,163 retired generals and admirals who warn against lifting the ban are similarly not intelligent. Nor are the majority in the armed forces who oppose the change and will be guinea pigs for this experiment in sexual anarchy.

And what about the Creator of the Universe? It is God’s moral code that has undergirded Western society for more than 3,500 years. God’s intelligent design – marriage – is the glue that holds it together. Even Chinese philosopher Confucius called marriage “the foundation of civilization.” What a moron. If only he could have lived in our day and evolved.

What we are witnessing among the intelligentsia is a catastrophic case of groupthink: Because they all repeat the same thing, it must be true. They ignore biology, morality, history, common sense and grim health statistics because they are smarter than anyone.

Charles Krauthammer, who has written some of the best critiques of Obamacare and the rest of the left’s assault on America, is also aboard the gay express. He’s smarter than God. So, too, are Chicago Tribune columnist Steve Chapman, Weekly Standard columnist Stephen Hayes, Fox News analyst Margaret Hoover and American Spectator columnist Phillip Klein, all of whom have called for repealing the military ban. Mr. Klein called it a “no-brainer.” No arguing with that.

The silence of other talking heads is deafening while Democrats ram through their immoral assault on our military. So I have a couple of questions for these pundits: First, given that you’ve warned us repeatedly about many dangers of the left, why are you embracing the centerpiece of their war on American values? Homosexual activism is the spear point of the larger cultural blitzkrieg. Without Judeo-Christian morals, liberty and freedom cannot thrive, as observers from Tocqueville to Adam Smith to George Washington have warned. Or just visit any inner city where socialist sexual values have prevailed.

Socialists have been at war with sexual morality since the French Revolution. It’s at the heart of their strategy to destabilize society in order to foment political revolution. So why is this totem of the left untouchable? Is Barney Frank wrong when he orchestrates bigger government but right when he promotes sexual immorality? It creates even more victims for a growing government.

Second, this one goes to Mr. Will. You have bravely stood in the gap on The Washington Post’s Op-Ed page against the global warming mob. You did so even before Climategate. You insisted we scrutinize their data before acting rashly. Why, then, aren’t you exhibiting similar caution when confronted with the claims of homosexual activists? They have ridden a boatload of junk science for the past 60 years, beginning with the fraudulent Kinsey sex studies, from which they manufactured the false claim that 10 percent of the population is homosexual. They went on to misrepresent the studies of UCLA psychologist Evelyn Hooker to “prove” that homosexuality was not a disorder, and threatened violence against the major psychological guilds until the American Psychiatric Association cried uncle and rewrote the diagnostic manual in 1973.

They persuaded the media to highlight some studies “proving” there was a “gay gene.” Each of these studies has been refuted or has been unreplicated, but the myth persists that science has established that people are “born gay.” Meanwhile, the media ignore the testimonies of many former homosexuals.

Given that this junk science makes global warming data look solid by comparison, why don’t Mr. Will, Mr. Krauthammer and others question the presumptions drawn from it?

Perhaps the answer lies in the Book that they now find quaint: “Professing to be wise, they became fools … who exchanged the truth of God for a lie.” (Romans 1:22, 25)

Someday, the smartest folks in America will wonder how they could have been so foolish. 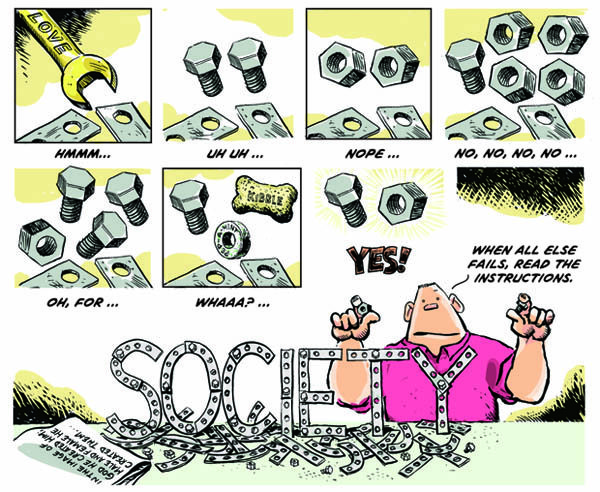