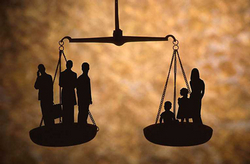 To claim that by opposing the gay agenda the Church is acting in an unloving manner is patently untrue.

It is considered negligent to allow or actively support action, drug abuse for example, that you know is both dangerous and destructive. Imagine being accused of bigotry after forbidding such action in one of your children. Yet Church opposition of the homosexual agenda draws angry criticism from those who claim her stance on homosexuality is based solely on religious bigotry against homosexuals. [Read more…]

Everyone talks about equality. But equality only exists in the eyes of God and is, after all, a rather Christian concept. We are all loved by God and in that is our worth. Ironically, many politicians are marginalizing religion from the public sphere in the name of equality. And many see the major obstacle to this enforced equality as Christianity.

Right now, homosexual advocates are marching under the banner of equality. And advancing quite well thank you very much. In fact, just this week the Archdiocese of Washington fell victim to the cause of enforced equality. [Read more…]

A new documentary, Oral Sex Is the New Goodnight Kiss, chronicles America’s moral decay. Sharlene Azam, a Canadian filmmaker, says, “If you talk to teens [about oral sex], they’ll tell you it’s not a big deal. In fact, they don’t consider it sex. They don’t consider a lot of things sex.” In the documentary, teenage girls talk casually about their sexual experiences and even their forays into prostitution.

One girl sums up the new attitudes: “Five minutes and I got $100. If I’m going to sleep with them anyway because they’re good-looking, might as well get paid for it, right?” [Read more…]

In another example of the so-called “major media” refusing to print anything negative about President Obama, they have given scant attention to the problems associated with Kevin Jennings, his Safe Schools Czar. Jennings is the guy who gave advice to a fifteen-year-old high school student about how to protect himself when he was having sex with an adult man. Mr. Jennings was told that the boy met the man in a bus-station restroom, and it seems that the best he could do was to tell the boy, “I hope you knew to use a condom.” [Read more…]

Watching the left attempting to undo the greatness of American medicine and dismantle the unprecedentedly powerful American economic engine built almost entirely on non-governmental entrepreneurial effort, I realize once again that the left is far better at destroying than building.

I first realized this as I watched the left — and here I sadly include the whole organized left from liberal to far left — do whatever it could to destroy one of the most wonderful organizations in American life, the Boy Scouts of America. From Democratic city governments to the New York Times and other liberal editorial pages to the most destructive organization on the left, the American Civil Liberties Union (ACLU), there has been the most concerted effort to break the Boy Scouts. [Read more…]

The media is trying to keep this story in the closet, but it’s important not to wink at all the serious problems surrounding President Obama’s controversial “safe schools czar,” Kevin Jennings.

Mr. Jennings is the moral malefactor who gave a speech about how he merely advised a 15-year-old high-school sophomore who was having sex with an older man that, “I hope you knew to use a condom.” He knew the boy had met the adult in a bus-station restroom. Mr. Jennings also expressed admiration for Harry Hay, a notorious and extremely prominent supporter of the North American Man Boy Love Association. “One of the people that’s always inspired me is Harry Hay,” he said. Despite numerous requests to the Obama administration and Mr. Jennings, we have not received any answers to inquiries about these troubling issues. [Read more…]

Wake up America and protect your children. The radicals Obama has surrounded himself with are targeting the innocent, corrupting children, and tearing away at the fabric of our country.

Safe Schools Czar Kevin Jennings was the founder, and for many years, Executive Director of an organization called the Gay, Lesbian and Straight Education Network (GLSEN). GLSEN started essentially as Jennings’ personal project and grew to become the culmination of his life’s work. And he was chosen by President Obama to be the nation’s Safe Schools Czar primarily because he had founded and led GLSEN (scroll for bio).

GLSEN’s stated mission is to empower gay youth in the schools and to stop harassment by other students. It encourages the formation of Gay Student Alliances and condemns the use of hateful words. GLSEN also strives to influence the educational curriculum to include materials which the group believes will increase tolerance of gay students and decrease bullying. To that end, GLSEN maintains a recommended reading list of books that it claims “furthers our mission to ensure safe schools for all students.” In other words, these are the books that GLSEN’s directors think all kids should be reading: gay kids should read them to raise their self-esteem, and straight kids should read them in order to become more aware and tolerant and stop bullying gay kids. Through GLSEN’s online ordering system, called “GLSEN BookLink,” featured prominently on their Web site, teachers can buy the books to use as required classroom assignments, or students can buy them to read on their own.
[Read more…]

Mr. Jennings wrote the foreword to a 1998 book titled, “Queering Elementary Education.” The book he endorsed was a collection of essays by different authors who supported teaching young children about homosexuality. Mr. Jennings’ foreword explains why he thinks it is important to start educating children about homosexuality as early as activist-educators can get away with doing so. “Ask any elementary-school teachers you know and – if they’re honest – they’ll tell you they start hearing [anti-homosexual prejudice] as soon as kindergarten.” And “As one third-grader put it plainly when asked by her teacher what ‘gay’ meant: ‘I don’t know. It’s just a bad thing.’ ” [Read more…]

In the wake of the controversial dismissal of Green Jobs Czar Van Jones, another of the President’s men has been attracting negative attention.

The President has chosen teacher and GLBT activist Kevin Jennings for advice and guidance on how best to foster a safe and drug-free environment for America’s school children. Much has already been written about Jennings’s controversial background, his troubling associations, his questionable ethics, and his obvious lack of qualification and suitability for the job of Safe Schools Czar. Given Obama’s need to stay in the public’s good graces in order to advance the cause of health care reform, it would hardly be surprising to see Kevin Jennings gently shoved off the President’s roster of advisors if this criticism continues. [Read more…] 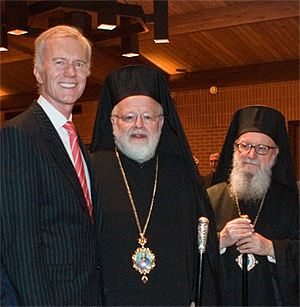 Globally, Orthodox Christianity is known to be highly conservative concerning what is frequently referred to as “traditional Christian morality.” In Europe, for example, more progressive and liberal elements of society spare no effort in attacking the Church as a bastion of traditionalist repression, especially concerning homosexuality.

Ironically, however, in the United States an image seems to be growing of the Orthodox Church as more liberal towards sexual sins than, for example, the Evangelical denominations. Quite a few people, judging by chatter on the Internet, are getting the impression that Orthodoxy is similar to the Episcopal Church in respect to moral issues.

Part of this confusion stems from the book Same-Sex Unions in Premodern Europe by John Boswell. This book, published in 1994, asserted that certain Greek Orthodox medieval rituals were really ecclesiastical blessings of homosexual unions. Boswell especially singled out the Greek Orthodox Rite known as adelphopoiesis or “brother-making,” as one such example.

Since the book’s publication, Orthodox sources have roundly debunked Boswell. (One such effort can be found here.) Even so, a casual stroll through Google will find Boswell’s claims widely repeated on Websites associated with homosexual issues. (LGBT sites in the common parlance of today.) The fiction created by Boswell is useful for sexually active homosexuals, both within the Orthodox Church and without. [Read more…]

Obama on Marriage: “As an African-American man, a child of an interracial marriage, a committed scholar, attorney and activist who works to protect the Bill of Rights, I am sensitive to the struggle for civil rights. As a state Senator, I have taken on the issue of civil rights for the LGBT [lesbian, gay, bisexual, and transgender] community as if they were my own struggle because I believe strongly that the infringement of rights for any one group eventually endangers the rights enjoyed under law by the entire population. Since 1996, I have been the sponsor or a chief co-sponsor of measures to expand civil liberties for the LGBT community including hate-crimes legislation, adoption rights and the extension of basic civil rights to protect LGBT persons from discrimination in housing, public accommodations, employment and credit.” [Read more…]

In the same week that the No on 8 campaign launched an ad that labeled as “lies” claims that same-sex marriage would be taught in schools to young children, a first grade class took a school-sponsored trip to a gay wedding. Eighteen first graders traveled to San Francisco City Hall Friday for the wedding of their teacher and her lesbian partner, The San Francisco Chronicle reported. The school sponsored the trip for the students, ages 5 and 6, taking them away from their studies for the same-sex wedding. According to the Yes on 8 campaign, the public school field trip demonstrates that the California Supreme Court’s decision to legal same-sex marriage has real consequences.

“Taking children out of school for a same-sex wedding is not customary education. This is promoting same-sex marriage and indoctrinating young kids,” said Yes on 8—ProtectMarriage.com Campaign Co-Manager Frank Schubert. “I doubt the school has ever taken kids on a field trip to a traditional wedding,” Schubert said. [Read more…]