Is there any doubt that the Cross of Jesus Christ is a scandal, a shame and embarrassment to anyone who chooses not to respond to God’s grace? Look at Jesus from a Jewish perspective in the time of Christ. They were awaiting a messiah, the anointed one of God — a deliverer who would reign in glory with the power and adornment of a king.

But who was Jesus? He was the son of a carpenter who came from a place of no stature or notice — “Can anything good come out of Nazareth?” (Jn. 1:46). He was an itinerant, poor preacher and would be condemned as a criminal, scourged, buffeted, spat upon and be crucified in total ignominy. [Read more…] 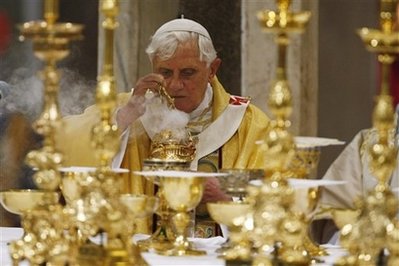 Pope Benedict XVI last night attacked the rise of aggressive secularism in Western societies, warning them that they risked drifting into a ‘desert of godlessness’.

He used his Good Friday meditations to compare deliberate attempts to remove religion from public life to the mockery of Jesus Christ by the mob as he was led out to be crucified. [Read more…]

It is rare to see a play on Broadway that is preoccupied with goodness. It is even more rare to see Broadway play extol the goodness of a religious person. When was the last Broadway show about a Christian hero? In this upside-down age that is hypersensitive to any criticism, no matter how fair, of any aspect of Islam but which regularly depicts many American Christians as buffoons and quasi-fascists, one can only hope that this play has a long run. Likewise, in an age when art increasingly celebrates the ugly and the bad, one can only hope that a million young people see a play that celebrates the goodness that God-based morality can produce. [Read more…]

Prayer is a conversation of man with God. He who prays with a broken and humbled spirit is filled with divine gifts and blessings — that is, with joy, peace, comfort, illumination and consolation — and he, too, becomes blessed. Prayer is the double-edged sword that slays despair, saves from danger, assuages grief, and so on. Prayer is a preventive medicine for all diseases of soul and body. — Elder Ephraim of Mt. Athos 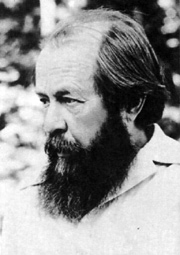 When Soviet dissident Alexander Solzhenitsyn gave his Nobel Lecture in 1970, he quoted this Russian proverb: “One word of truth outweighs the whole world.”

We know Solzhenitsyn’s story. In WWII Solzhenitsyn was a Soviet Army officer who was arrested and sentenced to eight years in the Gulags under Stalin. In prison Christ captures him. The encounter changes him, so much so that he clandestinely wrote the three volume “Gulag Archipelago” that laid bare the moral bankruptcy of Marxism. His work caused the collapse of the Marxist establishment in Western Europe and tilled the intellectual ground that led to the eventual collapse of the Soviet Union. [Read more…]

If you think the pro-life movement has run out of energy and new ideas, you should meet Lila Rose. You may not know her name, but you very likely have seen the media coverage of her various sting operations at Planned Parenthood clinics around the country.

Rose is 20 years old, but she is already entering her fourth year of covert operation, as it were, exposing the underhanded — and, in some cases, potentially illegal — practices at abortion clinics run by Planned Parenthood. [Read more…]

The idea that someone else can vicariously take responsibility for your sin and, additionally, impute their righteousness to you, runs counter to their form of reason. After all, isn’t human responsibility for our actions what makes us higher than the animals? If you have someone taking care of your sins for you, well, where’s the penalty? Moreover, where’s the credit for doing good? [Read more…]

In the Christian tradition, real believers have the audacity to believe that condoms don’t protect souls. The adulterer doesn’t need rubber, he needs a heart check. [Read more…]

We hold these truths to be self-evident,” the United States’ Declaration of Independence boldly asserts, “that all men are created equal.” This noble sentiment declares unapologetically that all human beings—no matter their age or sex, culture or religion, race or ethnicity, social class or educational achievement—possess intrinsic dignity and worth. Unfortunately, over the last century, America—and even more Western Europe—has increasingly shifted its focus from political liberty to social engineering, from equal protection before the law to sameness mandated by law, from equality to egalitarianism. The focus today is not on equal creation but on creating equality.

This almost obsessive urge to create equality has spread even to the Church herself. The last several decades in America have witnessed many Christians’ slow surrender to egalitarian values and the projection of those values back onto Jesus, the Bible, and church doctrine and discipline. [Read more…]

When you pray, go into your room and shut the door and pray to your Father Who is in secret; and your Father Who sees in secret will reward you. And in praying do not heap up empty phrases as the Gentiles do; for they think that they will be heard for their many words. Do not be like them, for your Father knows what you need before you ask them.”1 These words of Christ may provoke the following question: What is the sense of praying if God knows beforehand what we actually need?

In answering this question, one should remember that prayer is not just a request for something; it is first of all an encounter with Someone, a dialogue with the living God. “Prayer is communion of the intellect with God,” according to a classic definition by Evagrius the Solitary.[Read more…]

The news for people of faith is not good. Since 1990, the last time the survey was conducted, the number of people who claim no religion at all has risen from 8% to 15%. In contrast, all of the mainline denominations have seen a significant decline in the number of people who describe themselves as participants. According to the survey, the number of Baptist declined from 19.3% to 15.8%. Methodists dropped from 8% to 5% and there are now approximately 2.8 million people who identify themselves with some sort of “new religious movement,” including “Wiccan, pagan, or Spiritualist.” These numbers are all the more troubling when you consider the fact that the adult population of the United States increased by “nearly 50 million” during the same 18-year period. [Read more…]

According to a widespread view, the Orthodox Church is not a missionary church. Some Orthodox even claim that the Orthodox Church does not need any mission. “We are the holders of the Truth, and we testify to it by the very fact of our existence,” said proudly one Orthodox clergyman with whom I was speaking on this subject. One wonders, though, whether this approach can be justified by the church history. If the apostles after Christ’s Resurrection sat behind closed doors in Jerusalem, testifying to the truth by the simple fact of their existence, any further spread of Christianity would have been extremely unlikely. [Read more…]

More than any other world religion, Christianity asserts an intimate relationship with the divine, lifting human beings above their trying circumstances. So it is that oppressed peoples across the globe have found not only solace but genuine strength and purpose from Christianity, when brought to them in a positive fashion.

But today, with fewer Christian missionaries, Parris says a blanket of human passivity has fallen over the land. So in the most curious of politically incorrect comments, an atheist says that what nations like Malawi need most of all is more Christian missionaries. Kudos to Matthew Parris for seeing what other non-believers (and many believers) refuse to acknowledge, namely that belief in Christ has some powerful and positive effects. [Read more…]

A December issue of Newsweek featured a cover story entitled “Our Mutual Joy” that purported to offer a “religious case” for gay “marriage.” Author Lisa Miller claimed, “Opponents of gay marriage often cite Scripture. But what the Bible teaches about love argues for the other side.” Really?

It is interesting that apologists for the homosexual lifestyle typically say, on the one hand, that religious conservatives don’t really understand Scripture; if they did, they would see that there is no prohibition against homosexual love or marriage. On the other hand, they tell us the Bible is not to be trusted as a modern-day commentary when it speaks on moral issues—particularly sexuality. As Miller put it, “the Bible is a living document, powerful for more than 2000 years because its truths speak to us even as we change through history. In that light, Scriptures give us no good reason why gays and lesbians should not be married.” [Read more…]