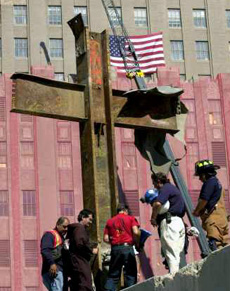 We’ve got a word for people who hate Christmas. The Grinch.

What should we call people who hate America’s Judeo-Christian heritage, even to the point of barring clergy at a ceremony at the site of a major tragedy?

How about “theophobic”? The word is already out there. You can look it up.

In one special case, we can just call the theophobe “Mayor.” That would be Michael Bloomberg, New York’s trendy, formerly Republican leader, who has topped even his own endorsement of a mosque near Ground Zero by forbidding prayer at the upcoming ceremony commemorating the 10th anniversary of the 9/11 attacks.

Maybe Mr. Bloomberg is only selectively theophobic, and would consider allowing some Muslim prayers, or perhaps an atheistic chant. To be fair, it must be noted that he has not had a problem with the display of the World Trade Center Cross, a 20-foot edifice composed of steel beams found that way in the Ground Zero rubble.

But his tone deaf moral equivalence when it comes to Ground Zero sensibilities is still stunning. Faced with opposition to the proposed mosque, he said, “I think it’s fair to say if somebody was going to try, on that piece of property, to build a church or a synagogue, nobody would be yelling and screaming.”

No, because it wasn’t Christians or Jews who hijacked the jetliners and rammed them into the Trade Centers, killing nearly 3,000 people. That’s kind of an important detail.

The sheer hostility toward America’s Judeo-Christian heritage is manifesting itself in weird ways.

I was on a radio talk-show the other day when the otherwise sane and articulate host ventured that people with a religious worldview cannot be expected to have open minds. This would rule out Isaac Newton, Albert Einstein and geneticist Francis Collins, not to mention George Washington, Benjamin Franklin, and all the poets from Shakespeare to Robert Frost.

And if it’s true that all religions are equal when it comes to shutting down the mind, why did science uniquely explode in the Christian Western World, as Stanly Jaki so eloquently explains in his book The Savior of Science?

Perhaps my talk-show host was drinking from the same fountain as the ever vigilant ACLU, which works ceaselessly to stamp out any public evidence of America’s religious reality. On any given day, the ACLU is yanking Ten Commandments monuments out of the ground or warning schools not to let pesky prayers find their way into football coaches’ motivational speeches.

Earlier this month, the ACLU managed to scare off a Florida panhandle community town from providing insurance for a rally honoring the victims of the Sept. 11, 2001 attacks. Why? Because God is in the mix.

Threatened with a lawsuit, the Milton City Council decided against providing insurance coverage for the “Restoring Faith in God, Country and Patriotism Rally.” Money raised for the event was originally earmarked for the Wounded Warrior Project, a charity that aids people injured in the War on Terror.

Milton, which lies just northeast of the Naval port and airfield at Pensacola, will still host the non-denominational assembly at the town high school football stadium to commemorate the tenth anniversary of the 9/11 attacks. But it will cost more than it should have.

The original plan was to place the event under the city’s blanket insurance coverage, but organizers instead had to purchase two hours of coverage for almost $1,000, thanks to the theophobes at the ACLU.

Milton Mayor Guy Thompson, a recipient of an ACLU warning letter, replied with an August 15 letter of his own: “The purpose and intent … is to commemorate the tragic events of Sept. 11, 2001 and to honor and celebrate those who died that day. The City also recognizes the efforts and sacrifices of our service men and women and others who have given so much to protect our nation and keep us safe.”

Yeah, let’s make it harder for cities to sponsor events like this.

In San Diego County, the ACLU threatened to sue over a $21,000 grant given to the Green Oak Ranch for capital improvements because the ranch is run by a Christian ministry. The ACLU said in an Aug. 2 press release that the grant violated the “No Aid Clause” of the California Constitution, which bars direct aid to religious entities even if the money is for non-religious purposes.

The ranch has long been used for events involving local governments and charities. In May 2005, for example, the ranch hosted a county-sponsored Foster and Kinship Family Celebration.

The ACLU’s interpretation of the statute, along with decisions by liberal courts, discriminates against religious organizations while allowing aid to non-religious entities. That’s tantamount to an official pro-atheistic policy. This flies in the face of the First Amendment, which bars establishment of religion, including the narrowest faith of all, atheism.

San Diego County Supervisor Chairman Bill Horn, who sponsored the grant, is probably on a wanted poster at ACLU headquarters. His web page has a photo of him presenting a proclamation honoring the Boy Scouts and another of him observing the National Day of Prayer. A public enemy, to be sure.

Green Oaks is used by many groups, according to its chairman, who told a local news station that “beneficiaries can be religious, non-religious, atheists, evangelicals, it doesn’t matter.”

Well, it still matters to the ACLU, whose work is never done.

From coast to coast, the liberal hostility to Bible-based faith knows no bounds. Maybe it’s time for the psychiatric profession to add “theophobia” to the manual of mental disorders.

It does seem to interfere with normal, rational thinking.