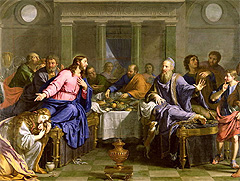 by James V. Schall, S.J. –
Greed, some say, is the main reason the poor are poor. It isn’t. We rarely take a close look at envy. Because someone is rich, it does not follow that he is therefore greedy. A poor man is free to be both greedy and envious. Envy is as much a generator of extra work as want, perhaps more so.

Mandeville’s famous notion, that our vices not our virtues cause prosperity, has a point. Usable wealth must first be produced and made available. The primary causes of wealth production are brains, effort, and virtue. The world was given to us in a raw state to see what we would do with it, yes, for one another.

At first sight, the oft-repeated lament that the world’s goods need to be “redistributed” for the benefit of the poor seems logical. Usually behind this apparently innocent approach is the idea of the limitation of the world’s “goods.” If the world’s resources are “limited,” then we need to establish a system of control of human behavior, of our “desires.”

The ideologues have been searching for centuries for this “moral” means to control human beings. Ecology is potentially the best thing ever to have happened to socialism and absolutism, as their advocates realize.

Moreover, it is claimed, we have to “save” the earth for “future generations.” How many future generations are never specified. Do we worry about the oil supply for the good folks, if there be any, in AD 4678? in AD 7842? in AD 11369? Besides wild guesses, how do we go about deciding what not to do today in order for us to be “just” to future generations?

If we really want to help the poor to become not poor, the first thing we must do is stop talking of “redistribution,”

The very proposition of “future generations” leaves out everything, including the eschatological question, about what we deal with in such future ages. We have no idea what they will need or have available. Who in 1900 thought that the computer, let alone the airplane, would be available in the year 2000, let alone be available to most anyone?

The fact is that we have no idea whether oil will be needed a thousand years hence or whether it will be the stuff that comes from some Arab sheikdom or the vast reserves in Dakota and Alberta. We imagine that the human race stops thinking two days after we are gone. Our passions for “earth-saving” are predicated on what we now know. Julian Simon used to delight in recording the panic predictions of our running out of this or that raw material, only to find that new supplies were found or new ways were discovered.

America was said to be overcrowded when Columbus discovered it, even though the whole continent probably had fewer than a million inhabitants. If no knowledge exists on how to improve the productivity of the earth, as both Locke and Rousseau ironically saw, then we starve to death on what nature produces spontaneously.

Evidently, the Garden of Eden did not need much tilling. When Adam and Eve were tossed out, they had to work by the sweat of their brows. Yet they were instructed to have dominion over the earth. This command obviously meant that they were to use it for their purposes. The planet was meant to be populated and improved. That’s why they were told to increase and multiply.

Suppose, when oil or coal were first discovered that they were defined by some early save-the-earth politician. And that he convinced the folks at that time not to use these raw materials but to “save” them for future generations, like ours. Then at the last judgment, the Lord calls these worriers up and ask them what they did with their talent. They tell Him that they managed to prevent from being wasted the stores of oil and coal which the Lord had provided for future generations. In the meantime, folks lived in dire conditions. Like the man with one talent, the Lord would say to them, “Depart from me, just what did you think these stores were given to you for? Why do you think I gave you brains?”

If we took all the goods of the earth and “redistributed” them “equitably” on some basis (who gets what is always amusing to contemplate – usually the ones already in control will get more), everyone would be poorer, both the present rich and poor. The whole notion of “redistribution,” as Bertrand de Jouvenel wrote in his famous book, is wrong-headed.

If we really want to help the poor to become not poor, the first thing we must do is stop talking of “redistribution,” which is, at bottom, a branch of envy theory. We have to look elsewhere, at innovation, thrift, incentive, proportionate justice, virtue, markets, culture, and growth.

If we really are concerned with the poor, talk of “redistribution” is not worthy of us.