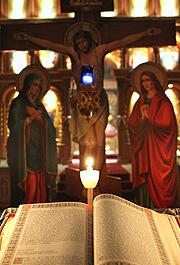 by Russell Kirk –
The conservative believes that the fear of God is the beginning of wisdom. … There is a divine power higher than any political power. When a nation ignores the divine authority, it soon commits the excesses of fanatic nationalism, intoxicated with its own unchecked power, which have made the twentieth century terrible.

Lord Hailsham, a talented English conservative of this century, in his little book The Case for Conservatism, remarks, “There is nothing I despise more than a politician who seeks to sell his politics by preaching religion, unless it be a preacher who tries to sell his sermons by talking politics.” Yet he goes on to say that conservatism and religion cannot be kept in separate compartments, and that the true conservative at heart is a religious man. The social influence of Christianity has been nobly conservative, …

The social influence of Christianity has been nobly conservative

In America, a sense of religious consecration has been joined to our political institutions from the beginning. Almost all the signers of the Declaration of Independence and the delegates to the Constitutional Convention were religious men. Solemn presidential proclamations, since the beginning of the Republic, have invoked the might and mercy of God. Most of our leading conservative statesmen and writers were men profoundly religious—George Washington, an Episcopalian; John Adams, a Unitarian; James Madison, an Episcopalian; John Randolph, an Episcopalian; John C. Calhoun, a Unitarian; Orestes Brownson, a Catholic; Nathaniel Hawthorne, a Congregationalist; Abraham Lincoln, a devout though independent theist; and many more. “We know and we feel inwardly that religion is the basis of civil society, and the source of all good and all comfort,” Edmund Burke wrote.

Now a conservative is a person who sees human society as an immortal contract between God and man, and between the generations that are dead, and the generation that is living now, and the generations which are yet to be born. It is possible to conceive of such a contract, and to feel a debt toward our ancestors and obligations toward our posterity, only if we are filled with a sense of eternal wisdom and power. We deal charitably and justly by our fellow men and women only because we believe that a divine will commands us to do so, and to love one another. The religious conservative is convinced that we have duties toward society, and that a just government is ruled by moral law, since we participate in our humble way in the divine nature and the divine love. The conservative believes that the fear of God is the beginning of wisdom.

The conservative desires to conserve human nature—that is, to keep men and women truly human, in God’s image. The dread radical ideologies of our century, Communism and Nazism and their allies, endeavor to stamp out religion root and branch because they know that religion is always a barrier to collectivism and tyranny. A religious person has strength and faith; and radical collectivism detests private strength and faith. Throughout Europe and Asia, the real resistance to collectivism has come from men and women who believe that there is a greater authority than the collectivistic state, and that authority is God.

The conservative believes that the fear of God is the beginning of wisdom.

A society which denies religious truth lacks faith, charity, justice and any sanction for its acts. Today, more perhaps than ever before, Americans understand the close connection between religious conviction and just government, so that they have amended their oath of allegiance to read, “one nation, under God.” There is a divine power higher than any political power. When a nation ignores the divine authority, it soon commits the excesses of fanatic nationalism, intoxicated with its own unchecked power, which have made the twentieth century terrible.

Any religion is always in danger of corruption; and in our time, various people have endeavored to persuade us that the Christian religion endorses some sort of sentimental collectivism, a “religion of humanity,” in which the Christian idea of equality in God’s sight is converted into a dreary social and economic equality enforced by the state. But an examination of the Christian creeds and the Christian tradition will not sustain such an interpretation of Christian teaching.

What Christianity offers is personal redemption, not some system of economic revolution. The human person is the great concern of Christian faith—as a person, not as part of a vague “People,” or “The Masses,” or “The Underprivileged.” And when Christians preach charity, they mean the voluntary giving of those who have to those who have not; they do not mean compulsion by the state to take away from some in order to benefit others. “Statists that labor to contrive a commonwealth without poverty,” old Sir Thomas Browne says, “take away the object of our charity; not understanding only the commonwealth of a Christian, but forgetting the prophecy of Christ.” The Christian religion does indeed enjoin us to do unto others as we would have others do unto us; it does not enjoin us to employ political power to compel others to surrender their property.

Any great religion is assailed by heresies. In the year of the Communist Manifesto, Orestes Brownson declared that Communism is a heresy from Christianity; and he is echoed today by Arnold Toynbee and Eric Voegelin, Communism perverts the charity and love of Christianity into a fierce leveling doctrine that men must be made equal upon earth; at the same time, it denounces real equality, which is equality in the ultimate judgment of God. And other ideologies which would convert Christianity into an instrument for oppressing one class for the benefit of another are heresies.

Excerpts from The Intelligent Woman’s Guide to Conservatism (1957). This article was reprinted from the original Imaginative Conservativea website.