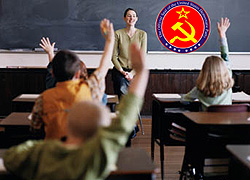 by Chuck Rogér
It is the job of educators to “change the thoughts, feelings, and actions of students.” So proclaimed psychologist Benjamin Bloom, originator of Outcome-Based Education. The U.S. Department of Education was created in 1979, setting the stage for Bloom’s decree only two years later. In the 1980s, the already ugly transformation of America’s schools gained momentum.

Many of today’s K-12 and university classrooms serve as laboratories in which instructors breed minds poor in knowledge and logic but rich in political correctness. Morally bankrupt values like “tolerance” and “diversity” are recurring themes. Such conditioning often aims to create “citizens of the world,” despite there being no planet-wide entity of which people can become citizens. But educators wedded to utopian visions have no time for such mundane reality. Time is precious. Students must be conditioned to join the “global community.”

Peace, unity and equality are the enemies of political subtleties. Men who are upright and simple are difficult to deceive because of their simplicity; lures and ingenious pretexts fail to impose on them, and they are not even subtle enough to be dupes.

Though the description was a bit raw, Rousseau was correct. If people are to be duped with high-minded notions, then “simplicity” must give way to confusion. The decay in both American culture and people’s judgment skills over the last fifty years demonstrates the power of progressive schooling to confuse, to corrupt morally and intellectually, to deliver starry-eyed young people to the mercy of seductive but nonsensical jabber.

On the other hand, youngsters who elude the progressive education machine — or who are shrewd enough to say no to the machine’s collectivist rubbish — grow up to reject the tenets of progressivism. For the truth is that “society” does not owe everyone equally comfortable lifestyles. Businesses have no “social obligation” to “give back to the community.” Bigger government is not better government. And no, all cultures are not equal.

But progressive educators sealed inside cocoons imagine real brilliance in hypothetical silliness. Rousseau had something to say on the character of a society wise enough to dismiss the silliness:

When, among the happiest people in the world, bands of peasants are seen regulating affairs of State under an oak, and always acting wisely, can we help scorning the ingenious methods of other nations, which make themselves illustrious and wretched with so much art and mystery?

Indeed, no clear thinker considers the political correctness fed to schoolchildren and university students anything but artful and mysterious drivel. Rousseau’s portrait of people using ad-hoc gatherings to run a nation captures two basic human truths: straight-thinking people are not drawn to highfalutin notions; emotionally healthy people focus on cause and effect, doing whatever is required to cause one especially desirable effect — happiness.

Conversely, many so-called “educated” people spend their lives pretending to know everything while understanding little. These emotional casualties of progressive schooling find the private sector hostile to idyllic theories that have no practical uses. They of furrowed brows, scowling countenances, and up-tilted chins enter government. The Obamas of the world cling to dreamy imaginings only to fashion lives absent true happiness — always seeking, never finding. In their seeking, the busybodies spread unhappiness far and wide.

Busybodies savor the thrill of managing the lives of others. But with the satisfaction that flows from guiding all of society comes a duty to issue proclamations. Rousseau marveled at how straight-thinking people repudiate such sages bearing edicts. A nation of mostly clear thinkers “needs very few laws; and, as it becomes necessary to issue new ones, the necessity is universally seen”.

Again Rousseau was right. Americans have generally had no use for pie-in-the-sky visionaries or the trimmings of ruling class elitism. A mere 5,979-word Constitution and Bill of Rights, with only seventeen additional amendments, served our country well for a long time. But the “educated” class multiplied. Special leaders emerged, leaders who decided that America must not suffer simplicity. For simplicity is so pedestrian.

The educated ones began dominating government during the Wilson administration and in the 1930s started to “improve” America at lightening-speed. Since then, progressives and conservatives alike have added tens of millions of words of “clarification” to our laws and regulations. Left and right ideologies have fueled a nonstop call for expanding legal codes. Each year’s millions of additional words either mystify or escape the scrutiny of everyday citizens. All the while, government enriches special interests that enrich politicians who get the millions of words written. Most devastating of all, government control keeps eating away at the freedoms of people who have no say in any of the words.

Rousseau was dead-on about the depravity of using “lures and ingenious pretexts” to force government control on people. In truth, clear thinkers need few laws. Americans once wanted to live as simply and as free as the Founders envisioned. Yet perhaps it can no longer be accurately said that most Americans value freedom above government-prescribed “security.” Progressive education has manufactured many elitists who have eagerly written many prescriptions.

But the high-minded remedies have sickened America. Ideology, special interests’ demands, and politicians pandering to the few have shouted down the concerns of the many. Corrupted values have corrupted our schools and spawned corrupt government. In America, the corporatist state now rules. Untethered from traditional morality, losing our way has become a way of life.