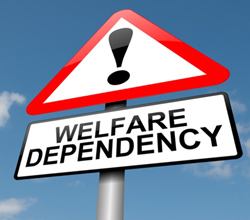 by David Limbaugh –
What will it take for the country to wake up to the destructive ravages of liberalism — and finally do something about them?

Liberals continue to masquerade as exclusive proprietors of compassion, but their policies stubbornly undermine their possessory claim. Indeed, Obama’s “fundamental transformation” of America is nothing less than America’s decline and destruction in the name of compassion and fairness.

You can’t scan a day’s news without seeing proof of this. Let’s look at just two items in today’s news digest.

The Cato Institute has released a report documenting that in Obama’s America, “welfare pays better than work.” Cato’s Michael Tanner concludes that the federal government funds 126 programs targeted at low-income Americans, a shocking 72 of which involve the transfer of cash or in-kind benefits to individuals. This does not include the many assistance programs provided by state and local governments. [Read more…] 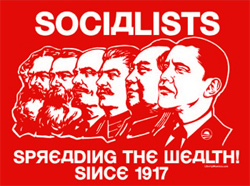 When John Harrison was a senior at Druid Hills High School in DeKalb County, a suburb of Atlanta, Georgia, he was miffed when he was rebuffed by parents at a private school when they refused to purchase a discount coupon for Domino’s Pizza. The money was to go to his public school’s art program. They told him, “We already contribute through taxes, and we pay for our children to go to school, so why don’t you hit up your own parents?” A little harsh, if it was really said that way, but right on the money nevertheless. Ann Coulter couldn’t have said it any better.

Young Mr. Harrison was “shocked and appalled” at the curt response he received. Well, I was shocked and appalled, but not surprised, at what I read next from the naïve public school senior who doesn’t own a home or pay very much in taxes and is on the domestic dole of his parents:

Paying taxes is a civic duty, and these people were arrogant enough to view their taxes as a contribution, not a responsibility.

by Bruce Walker –
The recent Occupy Wall Street ruckus and the drumbeat rhetoric of Democrats in Washington that the rich pay too little shows the dangers of placing power in the hands of those who have no real interest beyond self-interest in the governance of the nation. One rallying cry of our forefathers when the British Crown sought to impose taxes — really, very modest taxes — on the colonies without the consent of us colonials was “No taxation without representation!”

The logic of that slogan ran something like this: if I have no say in who passes taxes that I must pay, then what prevents the officials from imposing unfair taxes on me? On the other hand, if both the burden of taxation and the voice in tax-making are roughly equal, then taxes passed will be just and sensible. [Read more…] 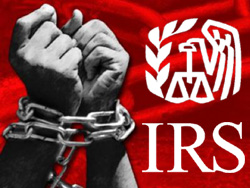 by C. Edmund Wright –
If there’s one thing that the ongoing national debate over Herman Cain’s 9-9-9 plan has exposed, it’s how much some conservatives love our current tax code and its enforcement arm. Who knew?

Okay, that may be an exaggeration — but it is not an overstatement to say that much of the criticism of Cain’s plan coming from the right is based in a stunning comfort with and knee-jerk reliance on our current system. It’s as if there is an undercurrent of belief that our IRS system is very, very good and can be replaced only by perfection. At the very least, much of the negative analysis is based on picking one aspect of the Cain plan and applying it to our current reality as if the 9-9-9 plan was ever designed to be applied piecemeal. This notion can come from only an intellectual vacuum where tax realities do not change human behavior. [Read more…]

by Fr. Gregory Jensen –
“In this world nothing can be said to be certain, except death and taxes.” ~ Benjamin Franklin

Does the government have a moral right to levy and collect taxes on its citizenry? Or is taxation merely a legalized form of governmental robbery?

While I’ve now and then heard people argue that taxation has no moral basis, I must confess that I find this assertion deeply troubling. As a matter of prudence, not everything which is immoral can, or should, be illegal. There are a variety of reasons for this chief among them is that as a practical matter the enforcement of a law can sometime cause more harm than good.

For example, the worship of God is a moral obligation both in the Scriptures and under at least some theories of natural law (see Romans 1). However as a prudential matter, a law that required people to worship God would invariably lead to social unrest. [Read more…] 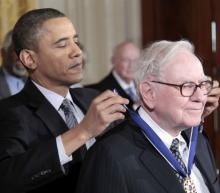 Notice the striking similarities in misrepresenting the facts and seeming to lack basic math skills when making pronouncements on taxes and embracing a liberal/progressive agenda?

by Verum Serum –
As you probably heard, Warren Buffett wrote an op-ed last week begging to be taxed at a higher rate. Rather than give you an excerpt of the article, here’s a little video clip in which he makes most of the same points:

Two points to make about this. First, can Warren Buffett do math? The Tax Foundation looked at his proposal [ht: Matt Cover at CNSNews] and found that his plan is a bust:

Suppose Mr. Buffett got his wish and loopholes and deductions were eliminated, making it possible to tax the “super-rich” (those earning $1M – $10M per year) at an effective rate of 50%.

This would theoretically (in reality people would find ways to protect their money) bring in enough to reduce next year’s deficit by 8%. This amounts to 1% of our current debt. But Buffett also envisioned a super-tax on those making over $10 million a year. It’s an easy sell since few of us are so fortunate, but what would it accomplish? Again, the Tax Foundation crunched the numbers and found that a 100% tax rate on these individuals would reduce the deficit by 12%. [Read more…]

by Frank Ryan –
The “tax the rich” hysteria gripping this nation is absolute insanity. Cries to raise taxes on those with incomes over $250,000 or some other magical number are unbelievable.

As a CPA, I find the “tax the rich” schemes to be pure junk science. To that end, the illogical precepts underpinning these arguments must be exposed. (Incidentally, by way of full disclosure, I would not be personally affected by these tax increases. I merely want to expose the scheme for the fraud that it is.)

Many in Congress have attempted to make earning an income distasteful, so those pitiable enough to earn an income are subjected to public scorn. Politicians and many in the media are collectively pushing policies to “punish those people” by taxing them into economic slavery and involuntary servitude. [Read more…] 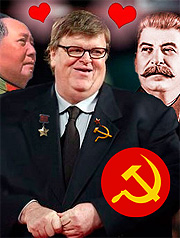 by Steve McCann –
Michael Moore and his fellow-travelers in the American version of the Socialist/Marxist cabal have picked up the mantle of defending public unionism in their demonstrations in Madison, Wisconsin and other state capitals. They are vocally calling for more confiscation of the wealth of the rich to pay for the bloated incomes of government workers and openly stating that all wealth belongs to the state while their true motives are deliberately obfuscated.

The age old premise and threadbare exhortation of class warfare has long found fertile ground among the lower classes but now they are being mouthed in support of one of the most advantaged groups in America today: public sector workers and their unions.

Even the most jaded of true-believers on the Left knows that confiscating the wealth and taxing what they consider to be unjust income would be self-defeating. What could be done one time can never be repeated and there would be no one to create jobs or a higher standard of living for the overall citizenry, particularly those on the left side of the ruling class. A cursory study of the experiences in the Soviet Union, Mao’s Red China and Cuba among others reveals that government control of the means of production and wealth creation is a massive failure. [Read more…]

“So I’ve been a little amused over the last couple of days where people have been having these rallies about taxes. You would think they would be saying thank you.”—President Barack Obama, April 15, 2010

Mr. President, with all due respect, you don’t get it. The Tax Day Tea Parties weren’t about taxes alone, they were also about spending.

And the tax cuts the President often talks about are, by and large, one-time checks that will do nothing to protect the taxpayer from future tax hikes. And he is concealing many tax increases in his budget right now. [Read more…]

“The most merciful thing that a large family does to one of its infant members is to kill it.” -Margaret Sanger, founder of Planned Parenthood

“[Our goal is] to be ready as educators and parents to help young people obtain sex satisfaction before marriage.” -Dr. Lena Levine, colleague of Margaret Sanger and medical secretary of the International Planned Parenthood Federation in the 1930s

“We are not going to be an organization promoting celibacy or chastity.” -Faye Wattleton, President of Planned Parenthood from 1978-1992

This summer, one of America’s largest community organization networks was “busted” thanks to the efforts of two college kids with nothing more than a video camera and a desire to expose the truth.[Read more…]

There’s no evidence Obama has even a sketchy grasp of economics.

Is President Obama an economic illiterate? Harsh as that sounds, there’s growing evidence he understands little about economics and even less about economic growth or job creation. Yet, as we saw at last week’s presidential press conference, he’s undeterred from holding forth, with seeming confidence, on economic issues.

Obama professes to believe in free market economics. But no one expects his policies to reflect the unfettered capitalism of a Milton Friedman. That’s too much to ask. Demonstrating a passing acquaintance with free market ideas and how they might be used to fight the recession–that’s not too much to ask. [Read more…]

“There are those who still think they are holding the pass against a revolution that may be coming up the road. But they are gazing in the wrong direction. The revolution is behind them. It went by in the Night of Depression, singing songs to freedom.” [Read more…]

Stimulus: More grim news — 467,000 jobs lost in June, with unemployment hitting a 26-year high of 9.5%. Some people are rightly starting to wonder: Where’s that stimulus we were promised?

The stock market’s reaction on Thursday said it all — with the major indexes plunging 2.4% to 2.9% on the news of a continued job hemorrhage. Despite some economic green shoots here and there, no one’s sure when jobs will start growing again. [Read more…]

WASHINGTON – House Democrats plan to pay for their health-care legislation with a big tax increase on wealthy households, aiming to raise $540 billion over the next decade with a package of surtaxes on families making $350,000 or more.

The tax increase is the financial cornerstone of legislation that seeks to make good on President Barack Obama’s call to expand health-insurance coverage to tens of millions of uninsured Americans, while attempting to offset the cost and avoid expanding the federal budget deficit. [Read more…]

Those who promoted the War on Poverty and other grand plans to end poverty, writes Hunter Baker, “had no inkling that these good-hearted strategies would lead to enduring cycles of poverty and family disintegration that threatened to consume entire generations. Wishing for good outcomes resulted in disaster.” [Read more…]