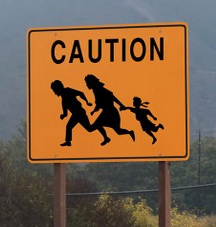 by Ann Coulter –
Every few months since at least 2006, The New York Times takes time out from brow-beating Evangelicals to praise them for supporting amnesty for illegal aliens. Most of the “Evangelicals” the Times cites are liberal frauds, far from “unlikely allies” in amnesty, as alleged. It is a specialty of the left to pose as something they’re not in order to create the impression of a zeitgeist. The only one I haven’t seen quoted yet is the ACLU’s minister, Barry Lynn.

The Times keeps touting Evangelicals for Amnesty as evidence of a “shift,” a “change of heart” and a “secret weapon.” Breaking the same news story every two months since 2006 isn’t a shift; it’s propaganda.

Any Evangelical promoting the McCain-Rubio amnesty plan has the moral framework of Planned Parenthood. Like the abortion lobby, they have boundless compassion for the people they can see, but none for those they can’t see. [Read more…]

6/1/2010 – Mark D. Tooley –
The 1.1 million-member United Church of Christ (UCC) is trying to raise $50,000 for a media campaign to blast Arizona’s new immigration enforcement law. Church prelates hope the ad will appear on May 29, when reputedly 500,000 will march in Phoenix against the law.

As America’s most left-wing Christian denomination, the fast declining UCC’s zeal for political activism perhaps compensates for its lack of evangelism. Having lost about half its members in recent decades, and several hundred congregations in recent years, the 1.1 million member denomination, at least as expressed by its elites, unapologetically plunges ahead with the latest causes du jour. [Read more…]

5/14/2010 – J.R. Dunn –
The Ottomans had an interesting method of assuring political stability. The sprawling empire operated on a system in which “millets,” distinct ethnic and religious groups, were allowed to oversee their own internal affairs while giving absolute loyalty to the sultan and his government. Every now and then a millet would be ordered to pack up and head out for a new home, at times at the opposite end of the imperium, amid new neighbors — sometimes the original residents, sometimes other refugees — of alien origins, ethnicity, and religious belief. Christians among Muslims, Catholics among Orthodox, Bulgarians among Turks, Circassians among Arabs…the variations were nearly endless. [Read more…]

What is Norway up to? The question can be put directly to the country’s Prime Minister, Jens Stoltenberg, because in his New Year’s speech he placed particular emphasis on the fact that it will be work that will make the difference in securing Norway’s future. Work, work, work – and now comes the news that criminal foreigners who serve more than a year in jail will henceforth automatically qualify for welfare. After three years in prison, they will have a right to a government pension and to health coverage. This will be the case even if they have come to Norway illegally. In other words, it pays for foreigners to come to Norway and commit serious crimes – and the more serious the crime, the greater the reward. [Read more…]

Here’s one key reason why our healthcare costs keep going up, and up, and up, despite the fact that Americans in general are getting healthier, living longer, and suffering from less cancer and other diseases.
[Read more…]

It’s official: The Obama administration plans to push a mass amnesty. It became official even before the New York Times reported the president’s plan to look “for a path for illegal immigrants to become legal,” said “a senior administration official.”

The White House website says that the president supports a plan to, “Bring People Out of the Shadows,” which it describes as “…a system that allows undocumented immigrants who are in good standing to pay a fine, learn English, and go to the back of the line for the opportunity to become citizens.” [Read more…]

Steinlight: The raid [in Iowa] demonstrates that massive immigration by the uneducated, unskilled and impoverished to a knowledge-based, largely post-industrial America is joined at the hip to exploitation. If one supports massive immigration – currently at the highest level in all of American history with the immigrants, legal and illegal, comprised predominantly of unskilled, uneducated and impoverished Hispanics – one must be prepared to countenance their exploitation and be complicit, knowingly or unwittingly, in permitting whole sectors of corporate America to return to the moral universe of unfettered capitalism portrayed in Upton Sinclair’s The Jungle. Neither wholesale violation of the rule of law by illegal aliens nor their brutal exploitation ought to be matters that divide the Left from the Right in America. [Read more…]

Three Afghanis were arrested Wednesday at an international airport in India’s Kerala state for flying with forged Mexican passports. They had just arrived there from Kuwait, where officials examined the passports identifying them as “Antonio Lopez Juan,” “Javier Sanchez Alberto,” and “Atonio Lopez Ernesto,” and found that they didn’t understand any Spanish. [Read more…]

The fact that 11 of the 18 wildfire victims lying in UCSD Medical Center’s burn unit are illegal immigrants with no apparent health coverage highlights the daunting financial challenge hospitals face in providing long-term, intensive care for all those who need it.

“These are the most expensive kinds of cases, but we don’t look at these patients and say, oh, because they aren’t legal residents, we’ll stop providing care or stop changing their bandages,” said Dr. Thomas McAfee, UCSD’s physician-in-chief. “It’s part of our ethic to continue to provide this care no matter what.”