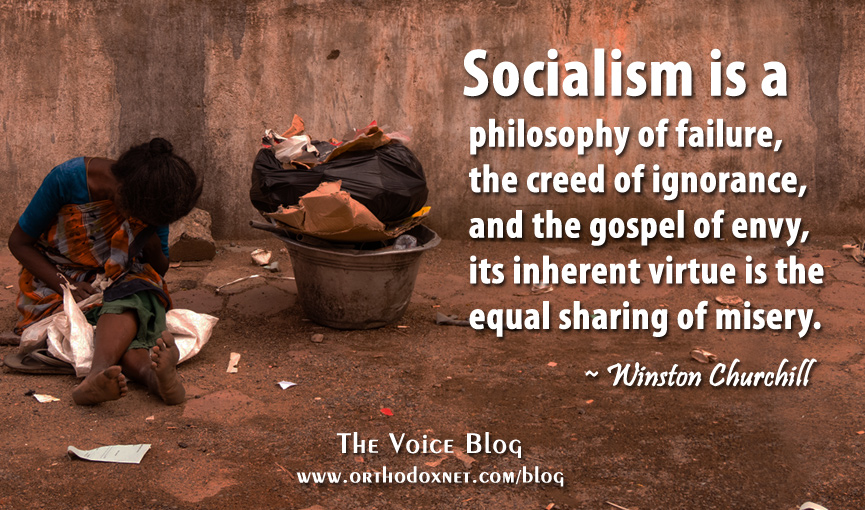 by Julie Roys –
Jesus confronted the money-changers and challenged believers to give to the needy. But, would he support socialism?

Increasingly, Americans think he would. In fact, a recent Barna poll found that more Americans think Jesus would prefer socialism (24%) than those who believe he would prefer capitalism (14%). The other 62% responded neither or not sure, but the poll still reveals a disturbing trend.

Last Saturday, Micah Conkling, a Christian writer and podcaster, argued on my radio program that socialism is the political and economic system that best fulfills the Golden Rule. Not surprisingly, Conkling is a Millennial, the most pro-socialist generation America has ever known. According to a recent Reason-Rupe survey, 53% of Americans under 30 view socialism favorably, compared to less than a third of Americans over 30. Similarly, Gallup found that 69% of those under 30 said they would be willing to vote for a socialist presidential candidate.

Though it may sound compassionate and Christian, socialism is antithetical to everything Christianity teaches

I understand why Millennials are wary of the current system. They’ve witnessed a consistently declining economy; one of the most partisan eras in American history; the fall of the twin towers; and a war predicated on weapons of mass destruction that were never found. I agree with them that our political system desperately needs reform. But, socialism is not the answer. Though it may sound compassionate and Christian, it’s actually antithetical to everything Christianity teaches. Here’s why:

a fundamentally materialistic worldview is the basis of socialism

This betrays a fundamentally materialistic worldview, which is the basis of socialism. To socialists, all that really exists is the material world. In fact, Karl Marx, the father of socialism/communism, invented the notion of dialectical materialism — the belief that matter contains a creative power within itself. This enabled Marx to eliminate the need for a creator, essentially erasing the existence of anything non-material.

To socialists, suffering is caused by the unequal distribution of stuff — and salvation is achieved by the re-distribution of stuff. There’s no acknowledgment of spiritual issues. There’s just an assumption that if everyone is given equal stuff, all the problems in society will somehow dissolve.

This worldview contradicts Christianity, which affirms the existence of both a material and a non-material world — and teaches that mankind’s greatest problems are spiritual. The Bible says the cause of suffering is sin and salvation is found in the cross of Christ, which liberates us from sin. Because of sin, though, there will always be inequalities in wealth. As the parable of the talents shows, those with good character tend to accumulate more; those with bad character may lose everything they have. Yet, even if we are unable to accumulate wealth, Christianity teaches that we can still have an abundant life. That’s because our quality of life is not determined by how much stuff we have, but by our relationship to Christ.

However, whenever any institution provides aid, it runs the risk of removing God-designed rewards and consequences. It can punish those who are industrious by making them pay for those who are not. And, it can reward those who aren’t industrious by giving them the fruits of another man’s labor. This is precisely what socialism does.

As Aristotle once noted, “Men start revolutionary changes for reasons connected with their private lives.” Interestingly, Marx mooched off others his whole life, and failed to provide for his wife and children.

The Bible teaches that aid should be tied to responsibility.

The Bible teaches that aid should be tied to responsibility. First, anyone who refuses to work should be refused aid. As 2 Thessalonians 3:10 says, “The one who is unwilling to work shall not eat.”

Next, no one should be given aid whose family can provide for him. In fact, the Apostle Paul said that a man who fails to provide for his family is “worse than an unbeliever.” (1 Tim. 5:8) The church also required widows receiving aid to have “a reputation of good works.” (1 Tim. 5:10) So, even in dispensing aid, the church rewarded virtue and discouraged vice. Unfortunately, socialism does just the opposite.

3. Socialism Endorses Stealing
Barack Obama once defended his socialist policies to a little girl by saying, “We’ve got to make sure that people who have more money help the people who have less money. If you had a whole pizza, and your friend had no pizza, would you give him a slice?”

That sounds pretty Christian, right? What Christian wouldn’t endorse sharing your abundance with someone who has nothing? However, Obama wasn’t endorsing people voluntarily sharing their wealth with others; he was endorsing the government forcibly taking a piece of the pie from one person and giving it to someone else. Put another way, that’s saying that if you have three cars and your neighbor has none, the government has a right to take your car and give it to your neighbor. That’s not Christian; that’s stealing!

But, socialists don’t believe in private property. And, some Christian socialists actually assert that the Bible doesn’t either. That’s preposterous.

Both the Old Testament and New Testament unequivocally affirm private property. We can’t even obey the eighth commandment to not steal, unless we accept the notion of private ownership. Nor, can we steward our money as the Bible commands if the state owns our money, not us. So, for an economic and political system to be Christian, it must protect private ownership and allow individuals freedom to allocate their resources according to their conscience.

4.Socialism Encourages Envy and Class Warfare
Socialists demonize the rich, blaming all of society’s problems on them. Bernie Sanders once posted to his Facebook Page: “Let us wage a moral and political war against the billionaires and corporate leaders on Wall Street and elsewhere, whose policies and greed are destroying the middle class of America.”

Here, Sanders is mimicking Karl Marx, who viewed history as a series of class struggles between the rich and the poor — and advocated overthrowing the ruling class.

Scripture strongly warns the rich and powerful not to oppress the poor. In fact, Proverbs 14:31 says, “Whoever oppresses the poor shows contempt for his maker . . .”

The rich are not causing all the problems in American society.

But, Sanders — and other Leftists, including Hillary Clinton — go far beyond decrying specific acts of injustice. They basically condemn an entire class of people simply for possessing wealth. And, they encourage those who are poor to overthrow them. In fact, Clinton once said the U.S. economy required a “toppling” of the wealthiest 1%.

The rich are not causing all the problems in American society. People like Bill Gates are not acquiring wealth by stealing from the masses. They’re creating great products, which produce wealth, and actually provide jobs for many people. But, even if they were exploiting the poor, nowhere does Scripture support the have-nots demanding money from the haves. Instead, it teaches that we should not covet (Exodus 20:17) and should be content in all circumstances (Phil. 4:11-13).

socialism seeks for the state to replace the family

5. Socialism Seeks to Destroy Marriage and Family
A little known fact about socialism is that, from its beginning, it has sought to destroy marriage and family. Grove City Professor Paul Kengor explains this in detail in his book, Takedown: From Communists to Progressives, How the Left Has Sabotaged Marriage and Family. Essentially, what socialism seeks is for the state to replace the family. That way, it can indoctrinate children in its Leftist way of thinking, and remove from them any notions of God and religion.

Friedrich Engels, co-author with Marx of the “The Communist Manifesto,” once wrote that the society he envisioned would be one where “the single family ceases to be the economic unit of society. Private housekeeping is transformed into a social industry. The care and education of the children becomes a public affair.”

there’s nothing Christian about socialism

Similarly today, Bernie Sanders calls for a “revolution” in childcare and for the government to provide early childhood education beginning with children as young as six-weeks-old. And, he’s a proud supporter of gay marriage — what Kengor calls “communism’s Trojan Horse” to secure the final takedown of traditional marriage.

To socialists, what Bernie describes is a utopia. But, to Christians, it’s a dystopia. That’s because there’s nothing Christian about socialism — and there’s absolutely no way Jesus would ever support it.

5 thoughts on “Five Reasons Socialism Is Not Christian”