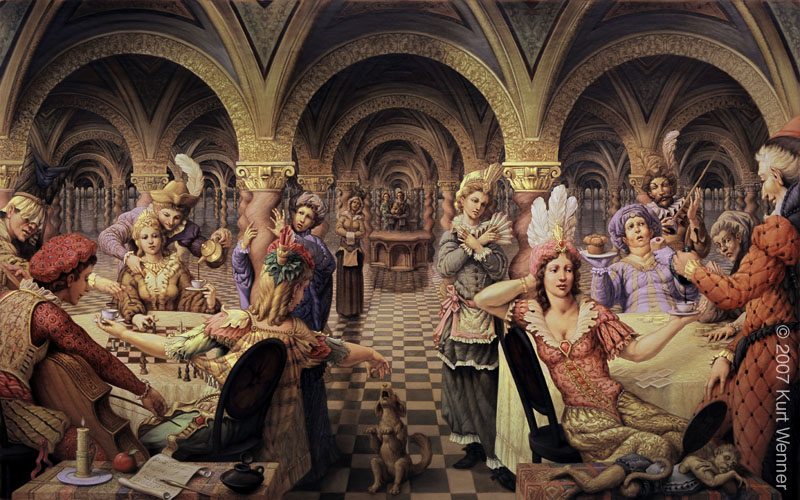 by Bruce Frohnen –
More than twenty-five years ago, in The Closing of the American Mind, Allan Bloom pointed out that college students in the United States had become very “nice.” Students in general did not want to offend anyone and there was a constant concern to protect one another’s feelings. Bloom meant this as a half-hearted, even backhanded compliment at the time. It should not be seen as any kind of compliment any longer. In fact, niceness has become the enemy of excellence in our universities, and its pervasive role is setting up our young people and our society for failure and an especially venal form of soft despotism.

“Niceness” is a rather shallow set of habits and attitudes more concerned with comfort than engagement, ease than excellence, contentment than striving to do one’s best. It was and is the perfect complement to our contemporary liberal insistence on “tolerance” as the chief virtue. Tolerance, after all, means simply allowing others to do and/or say what we may not like. When one takes things like religious faith and doctrine seriously, toleration can lead to spirited debate and vigorous pursuit of the truth, to everyone’s betterment. We accept that others may hold views we believe are wrong, even dangerous, because the only way to truly change hearts and minds is through civil discourse and example.

when truth comes to be seen as subjective, toleration becomes the chief virtue

Unfortunately, when truth comes to be seen as subjective, toleration becomes the chief virtue, and it comes to mean simply ignoring one’s fellows, in essence not caring what others do. If you leave me alone to do what I want, I will leave you alone to do what you want—whatever it is, because truth and virtue do not really matter, and probably do not exist in any event. All we have are our own preferences, so that our chief duty is to ignore one another’s actions. The result is a culture in which religious faith is viewed in the same manner as any other “hobby,” whether it is stamp collecting or group sex. In the same way, “niceness,” as opposed to the discipline of civility, can mean simply not caring whether anyone is right or wrong, reasonable, unreasonable, or simply lazy, so long as no one bothers to challenge anyone else.

Read a book, for God’s sake.

That we have long since reached the point where niceness is a barrier to the pursuit of excellence was reinforced, for me, by a small item in a journal for college teachers. It seems a Canadian college professor got himself in hot water for failing to be nice. Attending a journalist’s lecture to students, this professor was frustrated at one student who said young people do not vote because they do not understand the political system, finding it too complicated. The professor interjected “Read a book, for God’s sake.”

Actually, at the time, applause ensued. But once the common-sense quality of the remark had time to wear off, the niceness police sat up and took notice. Class discussions and student newspaper commentators condemned the professor for “heckling” a concerned student who, apparently, had a right to be praised for being brave and inspiring because she chose to use her own ignorance as an excuse for political apathy.

The professor (a male who “heckled” a female student, so, yes, the gender police also got involved) apologized for his remark. Interviewed by a Canadian national magazine, he sought to salvage some dignity from the situation along with his job by apologizing for his transgression against niceness while reiterating the importance of reading. Bravery, indeed.

One might, and many would, argue that this little drama turned out as it should—with the duty to be civil being upheld along with the value of knowledge. But this is not at all the outcome of such situations on campus. Rather, quite inconsequential violations of reasonable codes of civility (“wait your turn” and, of course “be polite”) become the focus of a great, even nationwide expression of concern, and even outrage. Meanwhile, the most the “offender” can manage is a small, abstract bow toward knowledge as a good, after making the mandatory apology. And we should not fool ourselves into thinking that niceness will reinforce, comply with, or even respect civility; it trumps it. Thus, if someone is giving the “wrong” talk at a university—if it is considered “not nice”—the niceness police will feel free to shout it down. Thus, New York City’s chief of police was literally heckled off the stage at Brown University when, at an invited event, he attempted to defend a policy (“stop and frisk”) the audience found too mean.

the right to not have one’s own beliefs, character, or even work ethic questioned trumps the pursuit of knowledge

The upshot is that, even or perhaps especially at universities, the right to not have one’s own beliefs, character, or even work ethic questioned trumps the pursuit of knowledge. Professors can say “knowledge is good,” but cannot point out that any particular student might need to work a bit harder to secure that knowledge and the skills needed to put it to good use. And anyone who actually questions broadly held beliefs about important topics, especially those related to race, sex, and sexual orientation, will find themselves branded as racist, sexist, and homophobic—that is, not nice, hence banished from the group to whom niceness, or even civility, is owed. The result, of course, is increasingly lazy and ignorant students (and professors). The result also is students, and graduates, who increasingly are immune to any call to excellence and virtue, more likely to take umbrage than to increase their efforts if called on to do better.

a nation of spoiled children cannot be free

It should be obvious that the results for those students and graduates will not be good out in the “real world” of employment, of bosses and deadlines. Of course, the results also are an increasingly unquestioned adherence to dominant, leftwing views regarding race, sex, sexual orientation, and various public policies aimed at expanding the social welfare state. The result is bad for public policy, and also bad for the young people who will find themselves challenged outside the bubble of academic “niceness,” who will not find themselves “affirmed” by people who are not paid to do so, and who, therefore, will be disappointed for most of their lives. These are the lessons most parents learned long ago regarding the need to avoid spoiling their children. Sadly, we all, increasingly, are spoiled by a cultural sensibility that values emotional comfort more highly than reality can support. And a nation of spoiled children cannot be free. They will demand comfort from the state, not only in material but also in emotional terms, sacrificing the freedom to challenge and excel to the “freedom” from being challenged.

5 thoughts on “The Cult of Niceness”