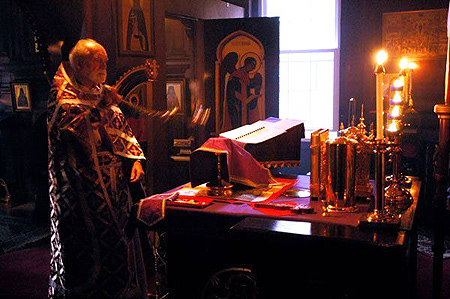 The joyousness which accompanies the performance of the Divine Liturgies of St. Basil the Great and St. John Chrysostom was regarded by the early Church as not suitable for the penitential season of the Great Fast. For this reason, the Synod in Laodicea (363 AD) forbade the performance of the Divine Liturgies during the Great Lent. except on Saturday, Sunday, the Feast of the Annunciation, and Holy Thursday.

The Christians of that time were in the habit of receiving Holy Communion almost daily and now were deprived of the strengths derived from Holy Communion for about a week. The greatly saddened them.

The Church, desiring Her children to continue their pious habit of daily receiving the Holy Communion, permitted its reception but from Holy Gifts that had been consecrated in a preceding Liturgy. Thus the Liturgy of Presanctified Gifts was formed, and was celebrated on evenings from Monday through Friday during Great Lent; there is no consecration of the Sacred Elements at the Liturgy of the Presanctified Gifts, but those who desire to communicate receive the Holy Gifts which have been consecrated at the previous Divine Liturgy. The Christians did not eat anything all day.

It received its present form from St. Gregory the Great, Bishop of Rome in the sixth century. It became a Canon at the Quinisext Council in 692 AD. The Canon reads:

On all days of the holy fast of Great Lent, except on the Sabbath (i.e. Saturday), and the Lord’s Day (i.e. Sunday) and the holy day of the Annunciation, the Liturgy of the Presanctified Gifts is to be served (Canon 52, Quinisect Council, 692 AD).

As the years passed, however, the Christians unfortunately lost their original zeal and ignored the benefits from Holy Communion, and so they did not receive it every day or even every Sunday. They received it at long intervals. Therefore the Liturgy of Presanctified Gifts lost its original and main meaning to those celebrating it. Today, it is used only during the Great Fast, on Wednesdays and Fridays; on Thursday in the fifth week of Great Fast; and on Monday, Tuesday and Wednesday in Passion (Holy) Week.

The Liturgy of Presanctified Gifts consists of Vespers, with special Prayers together with a portion of the Divine Liturgy, omitting its most important part, the consecration of the Holy Gifts; and the Third, Sixth and Ninth Hours (with the Typical Psalms) are used in a particular manner at the beginning.

The Sacred Elements, consecrated at the Divine Liturgy on Saturdays and Sundays, are preserved on the holy Altar in the tabernacle. The priest places the Gifts on the diskos with prayer and incensing after the Great Litany, during the chanting of the psalms (kathisma). He carries them in solemn procession around the back of the Altar, and to the Table of Oblation. 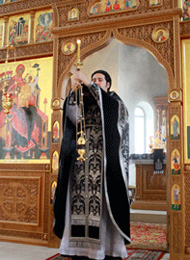 The evening psalm, Lord I call upon You, is then sung with the special hymns for the day. This is followed with the evening entrance, the hymn Gladsome Light, and two Biblical readings; from Genesis and from Proverbs. The Bible readings are punctuated by the Priest blessing the faithful with the censer and a lighted candle proclaiming “The Light of Christ illumines all!“. This blessing symbolises the light of Christ’s Resurrection, which illumines the Old Testament Scriptures and the entire life of mankind. This is the very Light with which Christians are illuminated in the life of the Church through Holy Baptism.

The Prayer of St. Ephraim is read after the singing of the evening psalm “Let my prayer rise in Your sight as incense. The augmented litany is chanted, and the Presanctified Gifts are brought solemnly and to the altar table. This is when the following special entrance hymn is chanted:

Now the powers of heaven do serve invisibly with us.
Lo, the King of Glory enters.
Lo, the mystical sacrifice is upborne, fulfilled.
Let us draw near in faith and love, and become communicants of life eternal.
Alleluia, Alleluia, Alleluia.

The Prayer of St. Ephraim is read again, accompanied with a litany and a special prayer before Holy Communion (Eucharist). “Our Father Who art in heaven …” is sung and the faithful receive Holy Communion to the singing of:

“O taste and see that the Lord is good. Alleluia”

The communicants “depart in peace” with thanksgiving to God for His Coming. The special dismissal prayer asks God for a successful fulfillment of Lent and to worthily celebrate the Great Feast of Pascha – the Resurrection of Jesus Christ our Lord.

O Almighty Lord … Who has brought us to these all-holy days for the purification of the soul and body, for the controlling of carnal passions … and the hope of the resurrection … enable us to fight the good fight, to accomplish the course of the Fast, to preserve inviolate the Faith … to be accounted victors over sin … and uncondemned, to attain unto and to adore Thy Holy Resurrection…

The evening reception of Communion is fulfilled after a day of prayer and fasting, with the total abstinence from food and drink at least from the early morning hours of the day – not an easy task.

The Liturgy of the Presanctified Gifts is one of the great masterpieces of Orthodox piety and liturgical creativity. It reveals the central Christian doctrine and experience in its form and content; namely that our life must be spent in prayer and fasting in order to be in communion with Christ who will come like ‘a thief in the night’. It tells us that all of our life, and not only on fast periods, is completed with the Presence of the Victorious Christ who is risen from the dead. It witnesses to the fact that Christ will come at the end of the ages to judge the living and the dead, and to establish God’s Kingdom “of which there will be no end”. It tells us that we must be ready for His arrival, and to be found watching and serving; in order to be worthy to “enter into the joy of the Lord”.

The Liturgy of the Presanctified Gifts is one of the most beautiful and meaningful liturgies in the Orthodox Christian Church.