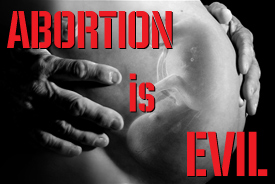 by George Michalopulos –
the mutilation of an innocent baby in its mother’s womb is an unarguable evil. Global warming, income inequality, and even capital punishment are arguable.

We don’t know whether global warming is an actual fact, a hoax, or something in-between. “Income inequality”? Why is the fact that Tom Brady makes more money throwing a football than a hamburger-flipper at McDonald’s unfair? It may be but it may not be. In other words, it’s arguable.

Capital punishment? Unfortunate, but a savage murderer is not on the same moral plane as an innocent child. Again, it’s arguable.

Abortion is a categorical evil for which there is no moral amelioration.