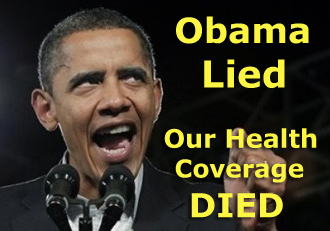 But that’s not what he really said, Obama announced Monday in a speech to about 200 Organizing for Action supporters, gathered at the St. Regis hotel in D.C. “What we said was you could keep it if it hasn’t changed since the law was passed,” he told Obamacare’s political beneficiaries and contractors.

That claim is not supported by his videotaped statements, which don’t include any mention of his new “if it hasn’t changed” exception.
…

Despite Obama’s new claims to his supporters, his “if it hasn’t changed” exception is not recorded in even one of his many videotaped “you can keep it” promises to Americans.

“If you like your insurance plan, you will keep it”

“If you like your insurance plan, you will keep it. No one will be able to take that away from you. It hasn’t happened yet. It won’t happen in the future,” Obama told voters on April Fool’s Day, 2010, after the law was signed.

However, Obama didn’t spend all of his Nov. 4 speech denying the videotapes.

He did confess that he and his aides may have made some mistakes, such as failing to manage the development of the Obamacare website.

But the newly-revealed exception is justified by a higher-priority promise in Obamacare, Obama declared. “If we had allowed these old plans [to continue]… then we would have broken an even more important promise — making sure that Americans gain access to health care that doesn’t leave them one illness away from financial ruin,” he announced.

“So the bottom line is, is that we are making the insurance market better for everybody,” he declared, prompting loud applause by supporters eager to ignore his three years of fraudulent statements.

The cancellations are spreading from the individual market to the small-group market. For example, Kentucky’s Department of Insurance has reported that 150,000 people in small-group plans — typically created for employees of small companies — are losing their insurance.

ObamaCare is now causing the cancellation of insurance policies chosen by at least 3.5 million Americans.

Obama urged his supporters to counter the political effect of the many cancellations by highlighting good-news stories, and by reassuring people who have lost their insurance that they can buy new Obamacare-compliant policies. “I realize that can be scary for people if they just get some [cancellation] notice like that… we’ve got to make sure that we’re getting them the right information,” he said.

But he also tried to downplay the Obamacare-caused cancellations, which are creating a wave of bad publicity that is hammering his poll ratings and his political clout. “People are acting like this is some new phenomenon… every year there was churn in this individual market” before the law was passed, he complained.

“some people’s health-care costs are going to jump, but it will be good for them”

But Americans’ complaints are subordinate to his political goals, he suggested. “We decided we need to build something better, no matter how hard it is,” he declared. Under that better progressive-managed system, some people’s health-care costs are going to jump, but it will be good for them, Obama said.

“Some Americans with higher incomes will pay more on the front end for better insurance with better benefits and better protections that could eventually help them a lot, even if right now they’d rather be paying less,” he announced.

Obama’s deceptive statements were deliberate and were intended to bolster Obama’s ability to get Obamacare passed in 2010 and him reelected in 2012, according to aides cited in a Wall Street Journal article Saturday.