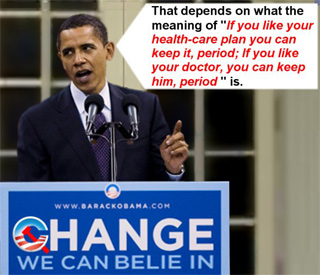 by Clarice Feldman –
There is widespread fury at the lies which were used to sell ObamaCare, a more than 2,000-page piece of legislation no one read before it was passed, a law opposed by the majority of voters which was crammed down our throats without a single Republican vote. The law essentially was a mishmash blank slate which left it to the administration’s HHS head, Secretary Kathleen Sebelius to write as she pleased and the president to — by Executive order — pay off with exemptions and special treatment those cronies and rent seekers not already paid off in the legislative and regulatory process.

Whether this law will continue to pass judicial scrutiny remains to be seen, but what is obvious at this early date is that the press and the public figures who promoted it are lying low as the tsunami of voter rage builds.

If your only source of news is the major media, here are some facts they’ve kept from you:

Since July 2010 the Administration knew that at a minimum 40-67% of private health insurance owners would not be able to keep their insurance.

1. Since July 2010 the Administration knew that at a minimum 40-67% of private health insurance owners would not be able to keep their insurance.

NBC’s Lisa Myers broke the story, but both on air and in its published account NBC went to great lengths to bury her account of events that makes the president’s repeated pre-election promise that if you liked your insurance you’d be able to keep it an outrageous bald-faced lie.

Here was her original report:

President Obama repeatedly assured Americans that after the Affordable Care Act became law, people who liked their health insurance would be able to keep it. But millions of Americans are getting or are about to get cancellation letters for their health insurance under Obamacare, say experts, and the Obama administration has known that for at least three years.

Four sources deeply involved in the Affordable Care Act tell NBC NEWS that 50 to 75 percent of the 14 million consumers who buy their insurance individually can expect to receive a “cancellation” letter or the equivalent over the next year because their existing policies don’t meet the standards mandated by the new health care law. One expert predicts that number could reach as high as 80 percent. And all say that many of those forced to buy pricier new policies will experience “sticker shock.”

None of this should come as a surprise to the Obama administration. The law states that policies in effect as of March 23, 2010 will be “grandfathered,” meaning consumers can keep those policies even though they don’t meet requirements of the new health care law. But the Department of Health and Human Services then wrote regulations that narrowed that provision, by saying that if any part of a policy was significantly changed since that date — the deductible, co-pay, or benefits, for example — the policy would not be grandfathered.

Here are the efforts NBC made to diminish that expose:

On air, Myers’ report was cut to 21 seconds “buried at the end of the show’s fourth story, with no follow up on Today. ABC and CBS completely censored Lisa Myers’ discovery with not one single second of coverage on either their morning or evening programs. ”

2. There is every reason to believe this expensive, well over $600 million contract for the Obamacare website design was offered to a Canadian Company because of cronyism with the Obamas and Valerie Jarrett, the White House Regent in Fact.

Michelle Obama had a longstanding relationship with a vice-president of the company tapped to create the ObamaCare website.

Townes-Whitley and her husband even enjoyed Christmas with the Obamas” at the White House in December 2010, according to a Facebook album created by Townes-Whitley.

Although neither Michelle Obama nor Townes-Whitley has discussed their relationship, the Christmas event took place just seven months after Townes-Whitley joined CGI Federal as a senior vice president.

Townes-Whitley and Michelle were more than mere classmates at Princeton — they worked closely together in pro-PLO activities:

The Department of Health and Human Services reviewed only CGI’s bid for the Obamacare account. CGI was one of 16 companies qualified under the Bush administration to provide certain tech services to the federal government. A senior vice president for the company testified last week before The House Committee on Energy and Commerce that four companies submitted bids, but did not name those companies or explain why only CGI’s bid was considered.

Townes-Whitley, who went by her maiden name Toni McCall at the time, and her classmate Michelle Obama, née Michelle LaVaughn Robinson, are both members of the Association of Black Princeton Alumni, and worked together in two different radical student groups on campus. (Related: Michelle Obama and CGI Federal executive belonged to student group at Princeton that hosted pro-terrorist speaker).

Valerie Jarrett’s son-in-law is the son of a Canadian member of the Ontario Provincial Parliament. He plays a major role in healthcare issues and it is likely that he vouched for CGI even though that company had already badly botched several large Canadian contracts including medical registration for diabetes sufferers.

3. The Discontent of Voters as they see their Insurance Cancelled and Premiums Sky Rocketing is Growing and Underreported

Some stories cannot be utterly hidden. The Chicago Sun Times finds it impossible to completely disregard the tsunami of anger, reporting on the unhappiness of a Democrat staffer and Obamacare backer Ms. Klinkhamer, which Iowahawk drolly called the “feel good story of the year.”

I spent two years defending Obamacare. I had constituents scream at me, spit at me and call me names that I can’t put in print. The congressman was not re-elected in 2010 mainly because of the anti-Obamacare anger. When the congressman was not re-elected, I also (along with the rest of our staff) lost my job. I was upset that because of the health care issue, I didn’t have a job anymore but still defended Obamacare because it would make health care available to everyone at, what I assumed, would be an affordable price. I have now learned that I was wrong. Very wrong.”

But you have to go elsewhere to get more of the sad stories of unhappy consumers. Most media who headline reports of voter distress when Republican officials and policies are involved (remember the tale we were told of the woman forced by poverty to wear her dead sister’s dentures?) are ducking this as much as they can. Go here for a more complete picture:

Each out of reach premium, each cancelled insurance plan, each inability to connect with the ObamaCare web should increase the furor, as this blog suggests.

Even as Secretary Sibelius was testifying before Congress on Wednesday that the Obamacare website never crashed, it crashed.

Interestingly, although the big media are trying to damp down these reports, not many major ObamaCare promoters are openly coming to Obama’s defense. That task was left to hacks like Representative Sandor Levin and Jarrett herself, whose defenses are frankly laughable.

Jarrett gave no interviews on the subject, she just tweeted: “FACT: Nothing in #Obamacare forces people out of their health plans. No change is required unless insurance companies change existing plans.”

Valerie, here’s another FACT: As the Administration has known for three years, the insurance companies are forced to change their plans because HHS regulations require that they do so, because geniuses like those who hired CGI for this job are obviously so much smarter than the predicted 16 million Americans who are about to lose their insurance. Men and women who until two weeks ago believed they — not you — knew which plans best suited their families’ needs.