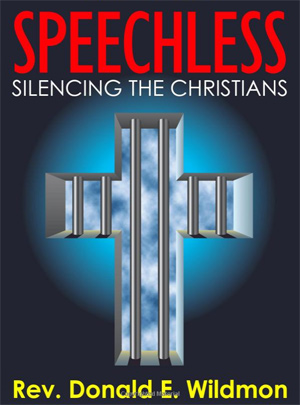 by Simon de Hundehutte –
It seems people have misunderstood, as well as misrepresented, the church’s role and influence in “secular society.” The early Christians lived in the secular society of Rome, but by heralding the good news of salvation, what some might call “thumping,” their words along with their deeds changed all of society of their day. In present-day America, however, secularists have taken over and changed the rules of the debate on so many key cultural issues.

Religion, or more accurately, the Christian way of life, is being shoved out of not only politics but the American culture. We believers are being forced to accept things anathema to our way of thinking and living — accept them or be labeled “haters” or, more recently, “thumpers.”

Every Christian is keenly aware of the Great Commission, where Jesus commanded, “Therefore go and make disciples of all nations, baptizing them in the name of the Father and of the Son and of the Holy Spirit.” (Matthew 28:19). Christians in the earliest days of the Church did not keep silent about their faith, bringing it with them (and many times at great cost) into the public arena. St. Paul debated at the illustrious Mars Hill with Greek and Athenian scholars (see Acts, Chapter 17). Many there, in fact, welcomed his insights and reasoning skills. Others, including both civic and religious leaders of the day, wanted him to keep his views to himself.

Think about it: Christianity in a few hundred years after the resurrection of its namesake had changed the entire Roman Empire. And certainly not by keeping its beliefs bottled up, only to be uncorked for an hour or two every Sunday. No, the Good News was front-and-center in a believer’s life, sometimes even shouted from the mountaintops (when the spirit so moved).

But, I am afraid the days of free speech for Bible-believing Christians may be quickly winding down. If the Supreme Court sanctions gay marriage, God and country will both soon fade away. America will fast become like Dietrich Bonhoeffer’s Germany. It may be that the day is near when any church unwilling to preach the State’s “gospel” will not be allowed to exist. (Woe to churches which currently meet on public property — in school auditoriums, for example.)

If we Christians are no longer able to share what the God of the Universe has revealed to us, how can anyone’s thinking on gay marriage or abortion or taking care of the planet or whatever be shaped or swayed?

I walked past a parked car the other day that was plastered with bumper stickers championing a far-left point of view. One that especially grabbed my attention said, “The last time religion and politics mixed, People got burned at the stake!”

After pondering this for a second, I thought, I wish I could meet the driver of this car and let him know that a more accurate statement would be, “The last time religion and politics mixed, William Wilberforce freed the slaves.” It has been Gospel-believing Christians, applying the tenets of the Word of God, who have taken on the huge challenges of humanity and, many times through much personal sacrifice (think martyrs), have freed many from bondage.

In the book of Romans, Paul challenges people to “be transformed by the renewing of your thinking.” (Romans 12:2).

Will the Christian way of thinking be welcome in the “court of public opinion,” or will we just settle into being a country filled with people who have a bumper-sticker mentality, never having a thought beyond the cleverest saying we can slap onto the tail end of our vehicles.

2 thoughts on “The Church’s Fading Influence on American Culture”