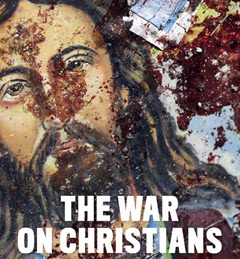 by Fay Voshell –
Christians of every persuasion must come out of their little worlds and their self-imposed isolation and fight. Fight for the Kingdom of God characterized by righteousness and justice. Fight for religious freedom. Fight for the right, the good and the true-not just for themselves, but for future generations.

A recent incident Florida has revived an ancient mechanism for persecuting Christians: forcing them to stomp on a representation of Jesus. It reveals a mindset of the left determined to weaken and destroy Christian civilization from within.

Todd Starnes of Fox News recently reported a Florida Atlantic University professor instructed the students in an Intercultural Communications class write the name “Jesus” on a sheet of paper and put the inscribed paper on the floor.  The instructor, Deandre Poole, then said, “Stomp on it.”

Ryan Rotela, a devout Mormon, refused, telling the professor, “With all due respect to your authority as a professor, I do not believe what you told us to do was appropriate.  I believe it was unprofessional and I was deeply offended by what you told me to do.”

Rotela was suspended from class.  The university initially defended the professor, citing the lesson was intended to encourage a multi-faceted viewpoint and debate. But Paul Kengor, executive director of the Center for vision and Values at Grove City College, indicated it was typical of the Left to cite buzzwords like “diversity” and “tolerance” while assaulting Christian and conservative beliefs. He added, “It also reflects the rising confidence and aggression of the new secularists and atheists, especially at our sick and surreal modern universities. Gee, I wonder if the instructor would dare do this with the name of Mohammed.”

Due to the controversy, the professor has since been put on administrative leave.

Stomping on Jesus touches a sore nerve. Beginning in 1626, Japanese Christians were forced to stomp or spit on an image of Christ or Mary. The images, named fumie, became a means of identifying Christians and a method of forcing them to repudiate their faith.  Stomping on Jesus or Mary also became a prelude to torture and universal persecution.  One torture involved cutting off three fingers from each hand, leaving only the little finger and thumb.  Children as young as five were subjected to this mutilation. The idea was that Christians were worse than animals and therefore entitled to fewer digits than the beasts.

Generally, however, if believers refused to stomp their feet on the fumie, they and their families were put to death by drowning or being burnt alive.  Some of the faithful were not up to martyrdom and went into hiding, utilizing special prayers asking forgiveness if they had capitulated to the Japanese government’s demands they renounce their faith.  For the next 250 years, the persecution of Japanese Christians was so intense they were nearly all exterminated, along with the symbols of the faith.  To this day, the number of Christians in Japan remains very low.

The attempts to exterminate Christians and the images of their faith have a long and bloody history, and certainly have not been confined to pre-modern Japan. While persecution has remained a constant of Christian history since the time of Jesus and the apostles, iconoclasm, the concerted attempt to rid a given civilization of Christian religious images, has been a recurrent issue, especially during the eighth and ninth centuries. During that time period, imperial legislation of Byzantium attempted to bar the use of figural images.  Existing icons were destroyed by those who had a theory that sacred images were “graven images,” and therefore idolatrous.

But some scholars believe the rise of Islam, which forbids religious images, coupled with the Byzantine emperors’ desire to make the State rather than the Church the sole authority were at the heart of the iconoclastic movement.  The movement aimed at destroying religious images gave the political rationale necessary to justify the persecution of Christians who would not bow to the almighty State.  Stomping on or eradicating Jesus’ image indicated subservience to the government and its imperial leaders.

Anyone who thinks iconoclasm is an historical oddity limited to the ancient past would be sadly mistaken. The iconoclasm directed at Christians is bound to continue, as it has in the past.  The attempt to wipe out Christian symbols and to achieve the Leftist goal of the total secularization of American society continues apace even though the majority of Americans are at least nominally Christian.

Whether it is the banning of Christian organizations from college campuses, the ongoing war against Christmas displays, not allowing the wearing of crosses in public schools, the removal of a portrait of Christ displayed in a public school, or the renaming of Easter eggs as “spring spheres“–the list goes on and on.  Even a cross in the remotest regions of the Mohave Desert has been attacked lest any atheist’s feelings by assaulted by a brief glimpse of the symbol of Christ’s sacrifice for humanity.  This is to say nothing of the recent scrimmage against the famous 9/11 cross, which has just barely been allowed to stay in the National September 11 Memorial and Museum. It is well to note that observant Jews also have not been exempt from attack by iconoclasts, as the recent effort to ban circumcision in San Francisco has demonstrated.

So much for the Left’s purported ideals of “freedom,” “equality,” “diversity” and “tolerance.”

But the worst attacks may be yet to come.  As Charles Krauthammer has recently warned, a full on war against religions that disapprove of gay marriage is possible, as the religious assault would go from being a local issue to a national one if the Supreme Court makes gay marriage legal. He said, “It will be sued everywhere in the country if it’s declared to be a constitutional right, because it would imply that anybody who opposes it does it only out of bigotry, for no other reason.”

It is clear the multi-faceted and relentless assaults against Christians and Christian symbols will continue, as the goal of the Left is to completely vitiate Christianity in America as it has been almost completely emasculated in Europe.  It’s well to remember that image breakers are actually image makers who seek to substitute their faith for the one they seek to eliminate.

Christian response has generally been weak.  There are many reasons for the lack of concerted outrage, but there are at least two reason Christians are allowing their immense contributions to American society and its culture to be attacked and sidelined.

One is the generally pacifist view many Christians have toward conflict of any type.  Most denominations embrace a view of Christ that is gentle, meek and mild, a Christ that advised patience with one’s enemies.  Jesus did advise patience.  But many forget the Christ who excoriated the leaders of his day for their oppression of the masses and who strongly confronted their idiocies with scalding contempt. Almost forgotten as well is the Christ who condemns and judges evil and who is committed to its complete eradication.

Fight for the Kingdom of God characterized by righteousness and justice.

The other is the retreat of Christians from the world into subcultures of their own making.  The retreat, begun at least a century ago, was exacerbated by the ridicule and contempt of the post WWI intellectual elite, characterized by anti-religious leaders such H.L. Mencken, Bertrand Russell and others converted to a secularist world view.  Fundamentalist and evangelical distaste for the world of film, theater and the arts meant whole areas of culture were given over without a fight while squabbles over doctrinal minutiae were given too much, indeed almost exclusive, attention. The problem was exacerbated by the wholesale capitulation to secularist liberals who rapidly took over formerly Christian academic institutions such as Princeton, Yale and Harvard.  Evangelical and fundamentalist monasticism also meant retreat from “dirty” politics and the gritty realities of the world.

So Christians should not be surprised that if having retreated from involvement in and resistance to the temptations of the World, the Flesh and the Devil into a manufactured and artificial world of their own devising, they should now be shoved back into an increasingly marginalized existence by those who hate them.

Fight for the right, the good and the true-not just for themselves, but for future generations.

There is only one way to stop the marginalization. There is only one way to stop the iconoclasm of the Left that would eliminate Christian symbols and influence from society. That way is to fight, because if Christians don’t resist with all their might the attempts to deprive them of their symbols of faith, their constitutionally protected right to express their faith and their right to influence the society in which they live and work and worship, the next step by the iconoclastic Left will be overt persecution and attempts at elimination from any significant role in society — and seventeenth century Japan shows how far human beings are able to go down that path.

Christians of every persuasion must come out of their little worlds and their self-imposed isolation and fight.  Fight for the Kingdom of God characterized by righteousness and justice.  Fight for religious freedom.  Fight for the right, the good and the true-not just for themselves, but for future generations.