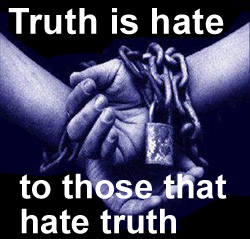 by Bill Muehlenberg –
On the outside wall of the Ministry of Truth building are the three slogans of ‘The Party’: “WAR IS PEACE,” “FREEDOM IS SLAVERY,” “IGNORANCE IS STRENGTH.” Those who have read Nineteen Eighty-Four by George Orwell will be quite familiar with all this.

In his chilling 1949 novel Orwell warned of where society was heading, and in it offered us a horrific police state where Big Brother controlled everything through extensive use of propaganda, government censorship and surveillance, and nonstop indoctrination and mind control.

The book prophetically spoke of “thoughtcrimes,” “Newspeak,” and “doublethink”. Who would have thought that just sixty years on these very things would increasingly be part of life in Western societies? Today we have “hate crimes” and “hate speech” which refers to anything the secular social militants regard as non-PC.

We nowhere see this so heavily in operation as in the homosexual lobby. They have come closer to any other militant agitprop group to realising the Big Brother totalitarianism of 1984. They have become experts at turning vice into virtue and lies into truth.

And they have managed to co-opt governments to coercively implement their agendas. The heavy hand of the law – indeed the jackboot of the thought police – is now in full swing, being used against all those who dare to speak and think differently than the militant activists want us to.

This becomes crystal clear in the current debate about homosexual marriage. We have entered such ominous Big Brother times that to simply speak out in defence of heterosexual marriage results in all sorts of vicious attacks from the militants and the secular state.

The incredible homosexual fascism we see unfolding over Margaret Court is a perfect example of all this. These intolerant militants not only want to stage protests at the Australian Open next week, they are demanding that the Margaret Court Arena be renamed. What an ugly bunch of jackboot brown shirts these people are.

And this militant moonbattery is unfortunately spreading throughout the Western world. Consider another brand new example, this time from Eastern Europe. The PC thugs at the EU are running roughshod over any sovereign nation which refuses to kowtow to the homosexual lobby’s demands.

Consider this amazing news item: “European Union officials are making their disapproval of Hungary’s recent constitutional changes felt by threatening to withhold financial support if it does not remove its new amendment defining marriage as between a man and a woman, according to one Hungarian source.

“The so-called ‘Easter constitution’ adopted in the post-Communist country last May was a major shakeup for Hungarian politics and an outrage to progressive EU ideology: the document not only supported marriage but declared that the unborn child deserves protection from the moment of conception, and even made special mention of Christianity as lying at the heart of the country’s identity. The document’s discussion of human rights also does not mention sexual orientation, another break from EU priorities. The Hungarian daily Magyar Nemzet claimed this week that the EU would move to drop financial aid to Hungary unless officials there scratched the marriage definition.”

Thank God there are still Western governments left which recognise the fundamental importance of marriage, family, life, and faith. But in one Western nation after another anti-family and anti-Christian bigotry is being legislated and enforced. All sorts of PC tribunals have been established to implement the policies of Big Brother.

But all this is just as Orwell had warned. Thus to simply speak truth today you will be accused of hate. And what is even more disconcerting is that so many other Christians are siding with the militants. To simply defend marriage as between a man and a woman will land you in hot water. You will be accused of hate speech and all hell will break loose from the militant homosexual activists and their supporters – and this includes plenty of naive Christians.

Indeed, Christians will often attack us for so resolutely defending marriage and resisting the homosexual juggernaut. They think we should just ease up on all this. One simply has to look at my most recent article and note all the bizarre comments coming from those claiming to be Christians: www.billmuehlenberg.com/2012/01/12/what-to-do-with-the-truth/

But my reply to these critics is as follows: “If I profess with the loudest voice and clearest exposition every portion of the truth of God except precisely that little point which the world and the devil are at that moment attacking, I am not confessing Christ, however boldly I may be professing Christ. Where the battle rages, there the loyalty of the soldier is proved, and to be steady on all the battle front besides is mere flight and disgrace if he flinches at that point.” (Attributed to Martin Luther but actual origin uncertain)

Some issues are far too important to remain silent on. Truth is always too important to simply go along with the crowd. We can expect that the secular world will continue to turn on truth, on faith, and on family. But those who care about such things need to take a stand now.

And stand we must, since we have come to the very point which Orwell so forcefully warned us about. Today truth is hate for those who hate the truth. Truth has been turned into lies, and lies have been turned into truth. The militant activists who peddle their falsehoods hate it when you respond with truth.

And tragically plenty of misguided, gullible and biblically-illiterate Christians will go along with all this madness. I for one will never cave in to the mind-numbing and soul-destroying political correctness of the activist groups and their deluded supporters. In my view, it’s always better to be hurt with the truth than be comforted with a lie.

Or as George Orwell rightly stated: “The further a society drifts from the truth, the more it will hate those that speak it.”