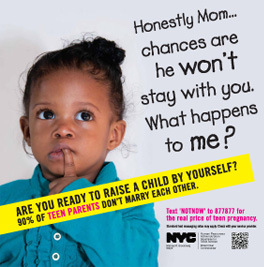 by Ann Coulter –
Like the proverbial monkey typing for infinity and getting Shakespeare, Mayor Bloomberg’s obsession with reforming New Yorkers’ health has finally produced a brilliant ad campaign.

Posters are popping up in subway stations and bus stops giving statistics about teen pregnancy that show cute little kids saying things like, “Honestly, Mom … chances are he won’t stay with you. What happens to me?” and “I’m twice as likely not to graduate high school because you had me as a teen.”

(Based on a recent CBS report, the kid could add, “Then again, I’m in the New York City public school system, so even if I graduate I won’t be able to read.”)

It’s one thing to stigmatize “Big Gulp” drinkers, but liberals are hopping mad at this attempt to stigmatize teen pregnancy, 90 percent of which is unwed. To put it another way, if you’re a New York teen with a distended belly these days, it had better be because you’re pregnant.

Instead, Morales suggested “helping teens access health care, birth control and high-quality sexual and reproductive health education.” Like the kind they got before becoming pregnant, you mean? Are you new here, Haydee?

Coincidentally, Planned Parenthood happens to provide reproductive health care! Liberals act as if gun owners, soda-guzzlers and smokers are innocent victims of the gun, food and cigarette industries, but the $542 million-a-year birth control industry is a quarry of angels.

The New York Times’ Michael Powell explained in a column that, as a parent of teenagers, he’s learned that the stupidest thing to do is resort to “the shame-and-blame game.” Teenage pregnancy, he states categorically, is a “problem of poverty.”

Liberals act as if gun owners, soda-guzzlers and smokers are innocent victims of the gun, food and cigarette industries, but the $542 million-a-year birth control industry is a quarry of angels.

I think we have a chicken-and-egg problem, but let’s stick to liberals’ newfound opposition to shaming campaigns.

Far from opposing stigmas, liberals are the main propagators of them – against cigarettes, guns, plastic bags, obesity, not recycling, Fox News, racist “code words,” not liking “Lincoln” and junk food.

The stigma against smoking has gone so swimmingly that you can’t enjoy a little tobacco pleasure 50 yards from another human being without some bossy woman marching over and accusing you of poisoning her.

California is currently running a series of “Reefer Madness”-style anti-smoking ads, including one that shows cigarette smoke going from a woman outside on her porch, up a story, through the door of another apartment, across the living room, down the hallway and into a room where a baby is sleeping. That would be the equivalent of the Bloomberg ads claiming teen pregnancy causes genocide.

And what exactly was the purpose of the Journal-News publishing the names and addresses of every legal gun owner in various counties in New York state a few months ago? To congratulate them? To start a hunting club?

No, I believe it was to stigmatize legal gun owners. The fact that we didn’t already know who they were proved that the problem isn’t legal gun ownership. All those legal guns – and no rash of drive-by shootings!

Los Angeles has banned plastic bags at supermarkets, even though reusable canvas bags are portable bacterial colonies. But a little ad campaign describing the downsides of teenage pregnancy – which is still subsidized – and liberals howl in protest. 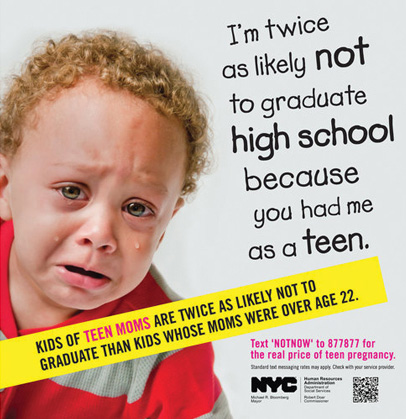 One begins to suspect that liberals aren’t as interested in stopping teenagers from having illegitimate kids as they claim. Do they believe a teenager who gets pregnant out of wedlock is harming herself and her child as much a teenager who smokes? How about an unwed teen who smokes at a landfill?

It’s only a “shame-and-blame game” when liberals secretly approve of the behavior they pretend to oppose.

Unwed mothers have been the perennial excuse for big government, going back to Richard Cloward and Frances Fox Piven, who plotted in the 1960s to create broken families, welfare dependency and urban riots to pave the way for socialist revolution.

That’s why single mothers are revered victims – victims in need of an ever-expanding social safety net, staffed with well-pensioned government workers. As described in that great book, “Guilty: Liberal ‘Victims’ and Their Assault on America,” liberals concoct fake victims in order to victimize the rest of us.

The only thing single mothers are “victims” of is their own choice to have sex with men they’re not married to. Liberals seem to believe that drinking soda is voluntary, but getting pregnant is more like catching the flu.

It would be hard to make the case that fast food, plastic bags and cigarettes do more damage than single motherhood.

So liberals don’t try to make that case. They just say they’re against “shaming” and then go back to shaming gun owners, non-recyclers, smokers and “Big Gulp” aficionados – while subsidizing illegitimacy.