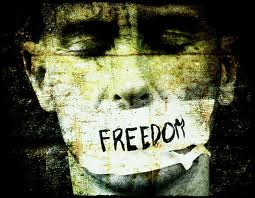 by Joe Carter –
When future historians attempt to narrow down the exact point at which the concept of free speech died in Canada, they’ll likely point to Saskatchewan (Human Rights Commission) v. Whatcott, specifically this sentence:

Jesus might have claimed that “the truth will set you free” but in Canada speaking the same truths proclaimed in God’s Word could potentially land you in jail.

“The ruling and the reasoning [behind it] is terrible,” defendant Bill Whatcott told LifeSiteNews.com. “They actually used the concept that truth is not a defense.”

The court ruled that making claims which could be construed as “detesting or vilifying” homosexual behavior is enough to classify speech as “hate speech”:

Courts have recognized a strong connection between sexual orientation and sexual conduct and where the conduct targeted by speech is a crucial aspect of the identity of a vulnerable group, attacks on this conduct stand as proxy for attacks on the group itself. If expression targeting certain sexual behaviour is framed in such a way as to expose persons of an identifiable sexual orientation to what is objectively viewed as detestation and vilification, it cannot be said that such speech only targets the behaviour. It quite clearly targets the vulnerable group.

The ruling also states that suppression of “hate speech”—such as claiming that homosexual behavior is immoral—is so important that it justifies infringing on religious freedom and provides a basis for a “reasonable limit on freedom of religion and is demonstrably justified in a free and democratic society.”

This standard is then used to justify a draconian standard of censorship:

If, despite the context of the entire publication, even one phrase or sentence is found to bring the publication, as a whole, in contravention of the Code, this precludes its publication in its current form.

The court used the preceding standard to scrutinize flyers that Mr. Whatcott distributed in 2001 and 2002. The language Whatcott uses is admittedly harsh and uncivil, but it does not rise to any reasonable standard of “hate speech.” In fact, the Court even considered whether a quotation of Matthew 18:6 can be characterized as “hate speech.” The court determined that it was not and added:

While use of the Bible as a credible authority for a hateful proposition has been considered a hallmark of hatred, it would only be unusual circumstances and context that could transform a simple reading or publication of a religion’s holy text into what could objectively be viewed as hate speech.

This is, of course, utter nonsense. By the court’s own ruling the presence of Leviticus 18:22 (“Do not have sexual relations with a man as one does with a woman; that is detestable.”) would warrant classifying the Bible as a hate speech document. The court clearly states that,

If expression targeting certain sexual behaviour is framed in such a way as to expose persons of an identifiable sexual orientation to what is objectively viewed as detestation and vilification, it cannot be said that such speech only targets the behaviour. It quite clearly targets the vulnerable group. [emphasis added]

Not surprisingly, many religious groups find the ruling and its implications disconcerting. According to LifeSiteNews, the Catholic Civil Rights League is concerned over the court’s equating homosexual activity with homosexual persons such that it turns criticism of sexual behaviour into “hate-speech” of an identifiable minority.

“A key teaching of Christianity is to hate the sin, but love the sinner,” said CCRL president Phil Horgan, pointing out that as a society, “we incarcerate convicted persons for their crimes, not out of hate for the individual.”

“But with Whatcott, the SCC has stated that criticism of behaviour(s) can be treated as potentially hateful speech against the minority. Will criticism of activities at gay pride parades be treated similarly? Will criticism of certain homosexual sexual activities be now conflated as an example of hate speech of an individual or minority? This conflation of behaviour with the person or group, is a proposition at odds with most religious teachings, and of concern coming from our highest court.”

Where speech can be punished as “hate” and truth ceases to be a defense, free speech cannot exist. As Donald R. McClarey says, “Canada no longer has freedom of speech. The Supreme Court of Canada killed it.”