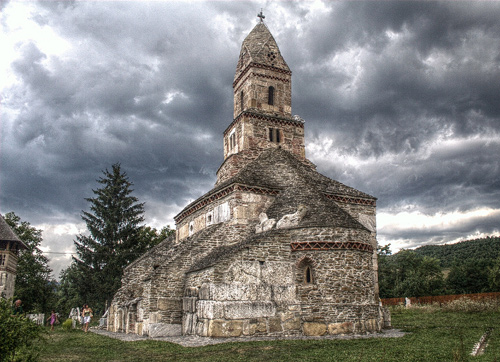 by Fr. Lawrence Farley –
The Dark Ages, insofar as they were dark, were darkened by the barbarian invasions that inundated the western Roman Empire, and that it was only in the Church and monasteries that any light was preserved.

Among the literature of those who make it their main business to vilify the Christians, perhaps no concept has served a more useful purpose than the idea of “the Dark Ages.” The Dark Ages, according to this reading of history, were those centuries in which the Church was culturally ascendant, with the inevitable result that civilization sunk into superstition, ignorance, obscurantism, and moral decadence. Here everything that was bad about the world is laid at the Church’s door, especially the decline of Science (with a capital “S”), which apparently had been going great guns until the Church took over.

As evidence of the Church’s war against Science, enlightenment, tolerance, and reason in general, the name of Galileo is usually bandied about, along with the notion that everyone in the Dark Ages thought that the world was flat. It was from this ecclesiastical abyss that Science eventually pulled us all out, saving the world from the Church and restoring civilization. But as we talk about the Dark Ages, it is worth asking how the Roman Empire of the west came to be so dark in the first place? [Read more…]

Reading Nathaniel Philbrick’s Mayflower, an account of the voyage of the Pilgrims and the settling of Plymouth Colony, what strikes me most is not simply the extraordinary suffering of those who made the crossing, or how close to failure the entire venture teetered for years, or even the author’s recounting of the first celebration we’ve since dubbed Thanksgiving.

What leaps out from the pages of the history, probably because it’s so little a part of the common narrative of the Pilgrims, is a crucial decision by the colony’s governor, William Bradford, to change the fundamental organization of Plymouth’s economy, a move which secured the colony’s future. As Philbrick describes it, after three years in America the Pilgrims “stumbled on the power of capitalism” and in the process ensured the colony’s survival. [Read more…]

The darkest times in human history have all begun when someone decided “not to let a serious crisis go to waste”. In fact, it is in times of economic crisis that folks are most susceptible to the ideas of tyrants. We look for an answer, any port in a storm that will shield us from the unknown. And in our desire to be safe, we open ourselves up to things that we would never have dreamed of allowing in normal times. [Read more…]

In the Mumbai Massacre terrorists particularly targeted Jews, focusing special attention of the Chabad house. The Holocaust denial in Iran and the proliferation of literary outrages like The Protocols of the Learned Elders of Zion or monstrous tracts like Mein Kampf, are sad proof that hatred of Jews is not limited to terrorists operating in India. The chic Leftists of Europe unite with terrorists in their reflexive hatred of Israel and unspoken anti-Semitism.

Grimly, not just anti-Semitism found violent expression in the generally placid India. This year alone, more than 100 Christians have been murdered in anti-Christian riots on the subcontinent. The ancient Christian community in Iraq is facing slow extermination. The defamation of Christian faith in elite salons has never been more gleeful than now. [Read more…]

An Israeli doctor has recently published an account of the Nazi use of abortion, euthanasia, and sterilization to eliminate groups they deemed “inferior stock”, especially Jewish and Slavic people.

MOSCOW –Russian Orthodox priests consecrated a wooden cross Wednesday at a site south of Moscow where firing squads executed thousands of people 70 years ago at the height of Josef Stalin’s political purges.

WASHINGTON — Some mornings during the autumn of 1933, when the unemployment rate was 22 percent, the president, before getting into his wheelchair, sat in bed, surrounded by economic advisers, setting the price of gold. One morning he said he might raise it 21 cents: “It’s a lucky number because it’s three times seven.” His treasury secretary wrote that if anybody knew how gold was priced “they would be frightened.”

Rip Van Winkle has nothing on Jan Grzebski, a Polish railway worker who just emerged from a coma that began 19 years ago–just prior to the collapse of communism in his country. His take on how the world around him has changed beyond recognition comes at an appropriate time. It was 20 years ago tomorrow that Ronald Reagan electrified millions behind the Iron Curtain by standing in front of the Berlin Wall demanding: “Mr. Gorbachev, tear down this wall!”

At the Danilov Monastery in Moscow, Hierodeacon Roman, a bell ringer, may be able ring the tower’s original bells by next year.

MOSCOW, March 20 — The bells of Lowell House at Harvard — so much a part of the university’s tradition that they have their own society of bell ringers — will soon return to the Russian monastery from which they were sold more than 70 years ago.

The Russian Orthodox Church and the university announced a final agreement on Tuesday to move the bells next year to Danilov Monastery, the residence of the Russian patriarch, after a replacement set for Harvard is completed.

The bells have become a symbol for the resurgence of the Orthodox Church and its drive, much like Russia’s, to reclaim its former glory.

(NEW YORK — C-FAM) A prominent journalist has argued recently that international political, economic and social breakdown were largely averted during the 1980’s due to the personal and political alignments between Pope John Paul II, President Ronald Reagan, and Prime Minister Margaret Thatcher. In his recently-released book, The Pope, The President, and the Prime Minister: Three Who Changed the World, National Review Editor-at-Large and Hudson Institute Fellow John O’Sullivan offers new research illuminating the three “hopeful” and “confident” personalities, and the way they forged relationships of mutual trust through their alliances and disagreements in a period of international upheaval and personal trial.

Crediting Reagan and Thatcher for reversing the economic “malaise,” stagflation, and defeatism in the American and British collective psyche, O’Sullivan chronicles the political risks both Thatcher and Reagan took to transform the world economy into a post-industrial, information-age economy that today has achieved “eighteen years of high growth with stable prices, scarcely interrupted by two mild and shallow recessions.”

So, on that Tuesday afternoon, a single flow of humanity was moving down the avenues; they were coming on Váci Avenue, on Bajcsy-Zsilinszky Avenue, but on Marx Square many stopped in hesitation: Which way now? The piled-up streetcars stood motionless where they had gotten stuck in their tracks, with the lights burning in the empty compartments. There were about 80,000 people stranded around the edges of the square, on the banks of this vast intersection. They were singing, shouting demands, having visions, speechifying. A crowd, half a million strong, was already in front of the Parliament building. They demanded that the Russians go home, and clamored for Imre Nagy to make a speech.

Ed. Since we have been discussing Hiroshima and Nagasaki, here is a piece with a different point of view by an Japanese Anglican Bishop who witnessed the bomb.

The outgoing chief bishop of The Episcopal Church, having presided over that 2 million member denomination’s spiraling schism over homosexuality, squeezed time into his schedule this week for an apologetic visit to Hiroshima.

Presiding Bishop Frank Griswold expressed “repentance” over the U.S. atomic strike on the Japanese city 61 years ago. He is also very worried about current U.S. foreign and military policies, of course.

“I express my own profound sorrow, regret and repentance for the suffering the citizens of this city bore on August 6, 1945, and those in Nagasaki on August 9,” the presiding bishop told worshippers at Hiroshima’s Church of the Resurrection. “I further issue a call to continuing mutual repentance and reconciliation.”

A dissonant note of moral equivalence at an exhibit on communist horrors.

ELLIS ISLAND, N.Y.–Tucked out of the way on the top floor of the main building here is a curious little traveling exhibit about the Soviet Gulag. On the day that I visited, no signs in the lobby of the Ellis Island Museum announced the presence of the exhibit; one happened upon it through determination or by chance, stepping with little warning from display cases devoted to the hopes of immigrants seeking freedom or opportunity in America into the hopeless deprivation and cruelty of Siberian death camps.

WARSAW–Wojciech Jaruzelski, Poland’s last communist leader, is still fighting hard to shape history. Press any hot button and the general holds forth in long, clear, numbing sentences, as if back at a Party Plenum. Martial law imposed by him in the early hours of Dec. 13, 1981, to break Solidarity and Lech Walesa? That, he claims–as he has always done–“saved Poland” from the Soviets. His unswerving loyalty to Moscow and a decade of strongman rule? That paved the way for democracy. Gen. Jaruzelski’s self-obsession has filled several memoirs, including his Polish best-seller, “Martial Law: Why?” A man so closely associated with the darkest episodes in his nation’s recent past wants the future not so much to forgive him as to understand him–and even give him a little credit for a free, undivided Europe.

Yugoslavia is gone, forever. The country that emerged from World War I and Versailles as the Kingdom of the Serbs, Croats and Slovenes, land of the South Slavs, has passed into history.