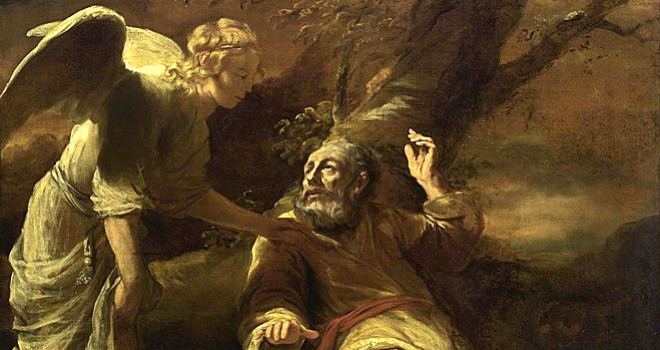 by Regis Nicoll –
“When God calls you to do something,” the speaker cautioned, “your only response is, yes.” I saw a number of heads nodding in agreement, but I sensed a question stirring in the heads of others: “But how do I know when God is calling?”

It’s an important question. In fact, there is no question more important for Christians. For how can we follow Christ, if we can’t tell his call from that of the culture or of those darker angels that would lead us into temptation or prod us to another have-to, got-to, need-to duty that seems good and feels good—and maybe, is good—but is not God sent?

The answer is, we can’t—without first recognizing the means by which God calls us.

But how do I know when God is calling?

Prior to Pentecost, God called individuals in four ways: Directly, through some physical manifestation of himself (the burning bush); indirectly, through divine messengers (angels); subconsciously, through a dream or vision (Jacob’s “stairway to heaven”); or personally, through God incarnate (during Jesus’s earthly ministry).

Our design, as with any intelligently crafted object, reflects our purpose and, thus, is indicative of what God may or may not be calling us to. Here, the Socratic dictum, “Know thyself,” is particularly apt.

At 6’4” and 200 lbs, I am not fit to be a jockey, nor is a jockey fit to be an NFL player. From design considerations alone, the desire of either of us for those careers can be dismissed, out of hand, as originating from God.

God’s call would not be to a same-sex union, committed or otherwise

The same goes for someone contemplating a same-sex relationship. Because homosexual couples cannot combine to accomplish the primary function of sex—namely, reproduction—God’s call would not be to a same-sex union, committed or otherwise, but to celibacy or to a union that, by design (if not in effect), is compatible with that function.

Added to a unique mix of inborn physical, mental, and psychological features, each Christian is endowed with spiritual gifts that equip him for service in God’s kingdom. Thus, spiritual gifts—and, how spiritual gifts align with inborn traits—are important “pointers” to calling.

For example, a Myer-Briggs ENFJ personality type combined with the gift of shepherding could point to a calling as a pastor. On the other hand, an ISTJ who has the gift of teaching is not likely to be called to a ministry of hospitality. (By the way, that’s me.)

But while spiritual gifts and natural traits can indicate a calling, they are not sufficient to confirm a calling. For that, we need the other Book—the Book of Scripture.

The Book of Scripture
We know, or should know, that God will never direct us to something that is contrary to his Word. Thus, any notion enticing us down a path that is intrinsically sinful (adultery) or that will lead us into sin, is counterindicative of God’s calling.

God’s calling will always be consistent with His revealed will.

Rather, God’s calling will always be consistent with His revealed will. It is a tragedy that many Christians have left their spouses, aborted their children, or taken on huge debt in the belief that God’s will for them is to be happy. But God’s will is not that we would be happy, but that we would be content in whatever circumstances we find ourselves.

His ultimate intent, of course, is that we “be conformed into the likeness of his son.” With that in mind, we should be wary of any nudging that, while not sinful, immoral or unethical, is not conducive toward that end.

Thankfully, believers are not left alone with their unaided reason to puzzle out the written Word. We have the indwelling Word, the Holy Spirit, whom Jesus, the incarnate Word, promised, “will teach [us] all things” and “guide [us] into all truth.” But to receive his counsel, we must create space for him to speak through the disciplines of prayer, silence, contemplation, and study.

We also have the corporate Word—that is, the Church—the body of one-another knitted together under the Lordship of Christ for mutual support, accountability, encouragement, and… let’s not forget, teaching, correction, and discipline.