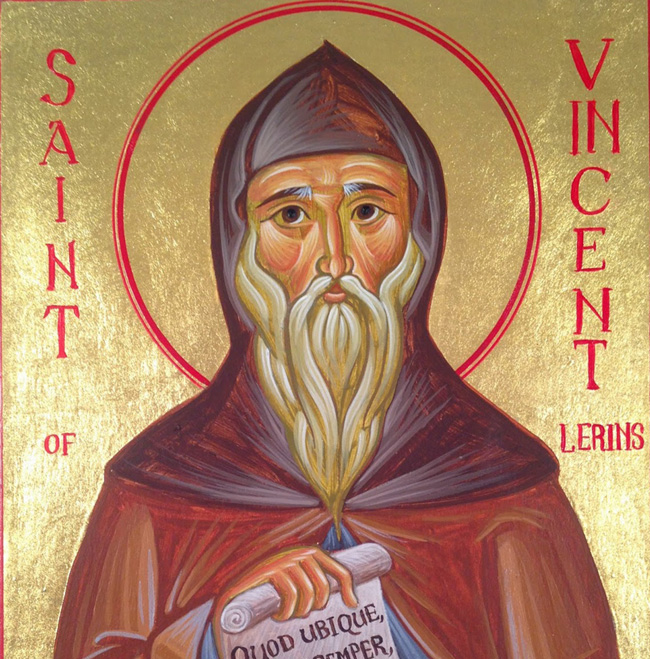 by St. Vincent of Lerins –

Here, possibly, some one may ask, Do heretics also appeal to Scripture? They do indeed, and with a vengeance; for you may see them scamper through every single book of Holy Scripture – through the books of Moses, the books of Kings, the Psalms, the Epistles, the Gospels, the Prophets.

Whether among their own people, or among strangers, in private or in public, in speaking or in writing, at convivial meetings, or in the streets, hardly ever do they bring forward anything of their own which they do not endeavor to shelter under words of Scripture.

Read the works of Paul of Samosata, of Priscillian, of Eunomius, of Jovinian, and the rest of those pests, and you will see an infinite heap of instances, hardly a single page, which does not bristle with plausible quotations from the New Testament or the Old.

But the more secretly they conceal themselves under shelter of the Divine Law, so much the more are they to be feared and guarded against. For they know that the evil stench of their doctrine will hardly find acceptance with any one if it be exhaled pure and simple. They sprinkle it over, therefore, with the perfume of heavenly language, in order that one who would be ready to despise human error, may hesitate to condemn divine words.

they conceal themselves under shelter of the Divine Law

They do, in fact, what nurses do when they would prepare some bitter draught for children; they smear the edge of the cup all round with honey, that the unsuspecting child, having first tasted the sweet, may have no fear of the bitter. So too do these act, who disguise poisonous herbs and noxious juices under the names of medicines, so that no one almost, when he reads the label, suspects the poison.

It was for this reason that the Saviour cried, “Beware of false prophets who come to you in sheep’s clothing, but inwardly they are ravening wolves.” What is meant by “sheep’s clothing”? What but the words which prophets and apostles with the guilelessness of sheep wove beforehand as fleeces, for that immaculate Lamb which taketh away the sin of the world?

What are the ravening wolves? What but the savage and rabid glosses of heretics, who continually infest the Church’s folds, and tear in pieces the flock of Christ wherever they are able? But that they may with more successful guile steal upon the unsuspecting sheep, retaining the ferocity of the wolf, they put off his appearance, and wrap themselves, so to say, in the language of the Divine Law, as in a fleece, so that one, having felt the softness of wool, may have no dread of the wolf’s fangs.

then will those profane novelties be disclosed

But what saith the Saviour? “By their fruits ye shall know them;” that is, when they have begun not only to quote those divine words, but also to expound them, not as yet only to make a boast of them as on their side, but also to interpret them, then will that bitterness, that acerbity, that rage, be understood; then will the ill-savour of that novel poison be perceived, then will those profane novelties be disclosed, then may you see first the hedge broken through, then the landmarks of the Fathers removed, then the Catholic [Universal] faith assailed, then the doctrine of the Church torn in pieces.

But when they began to interpret in different senses the passages which both had agreed in appealing to, then were discerned the guileless from the crafty, the genuine from the counterfeit, the straight from the crooked, then, in one word, the true apostles from the false apostles. “And no wonder,” he says, “for Satan himself transforms himself into an angel of light. It is no marvel then if his servants are transformed as the servants of righteousness.”

Therefore, according to the authority of the Apostle Paul, as often as either false apostles or false teachers cite passages from the Divine Law, by means of which, misinterpreted, they seek to prop up their own errors, there is no doubt that they are following the cunning devices of their father, which assuredly he would never have devised, but that he knew that where he could fraudulently and by stealth introduce error, there is no easier way of effecting his impious purpose than by pretending the authority of Holy Scripture.

He is remembered for writing that Christians must follow the true faith that has been held “everywhere, always, and by all.” He also defended the term “Theotokos” with regard to the Mother of God in opposition to the teachings of Nestorius that were condemned at the Third Ecumenical Council.

Saint Vincent died peacefully in 456 AD. His relics are preserved at Lérins.