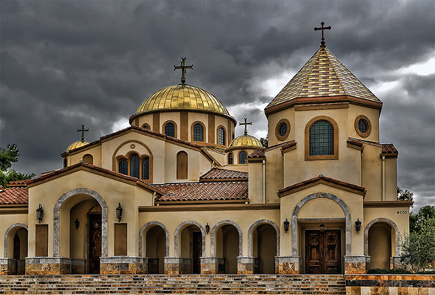 by Fr. John Whiteford –
It would be nice if we could ignore the culture wars, but the culture wars are coming after us, our Church, and our families. You can choose what you are prepared to defend, but you cannot choose who will attack what you wish to defend.

It is not as if the Orthodox Church was full of people who thought gay marriage was a great idea until converts started showing up. In fact, the Orthodox in traditionally Orthodox countries are very conservative, and though, for example, there are not lots of Protestant converts to Orthodoxy in Russia, the Russian Church has taken a very strong and vocal position on these issues.

Patriarch Kirill of Moscow is not a convert from Protestantism, but he made these comments at the end of a recent concelebration with Metropolitan Tikhon of the OCA:
The task of our Churches is to pray and work in order that the Lord would grant His mercy on the peoples of our countries, so that God’s strength would make moral basics stronger, which originate in God’s morals of the Bible, and so that the relations between our countries would strengthen based on common moral values.

That is why we endure the deviations from these God’s moral standards so painfully. The deviations take place both in the United States and other Western countries at the present time. It is a great challenge for Christian Churches. Many of them, especially Protestant organizations, fail to overcome this challenge – they follow the path of the renunciation of their own identity, refuse from moral values of the Gospel in favor of political fashion. But the Orthodox Churches cannot do this and therefore the Orthodox Churches encourage people to profess the faith. We have a right to speak about it like this here at this cathedral, because our Church has gone through decades of suffering and profession, but it has not faltered or cheated on itself.

That is why we heartily wish that the Orthodox Church in America would preserve the fidelity to Christ, His Commandments, and would be, if not very bright and strong, but still light for its people. We are aware that even the light of a small candle becomes a powerful point of reference and helps people find their way to salvation”
(see “Orthodox Church is the Bridge that Can Unite Russian and American People.

This coming right on the heels of a controversy within the OCA, in which a senior priest has suggested that the Church needs to re-think its position on homosexuality, I can’t help but suspect that these comments were made in reference to it.

the culture wars are coming after us, our Church, and our families

It would be nice if we could ignore the culture wars, but the culture wars are coming after us, our Church, and our families. You can choose what you are prepared to defend, but you cannot choose who will attack what you wish to defend. Franklin Roosevelt was not “fixated” on militaristic fascism… but he spent quite a bit of his efforts and energy fighting it, because militaristic fascists were attacking the country that he, as president, was sworn to defend.

Today it is pro-abortionists, pro-homosexuals, and certain varieties of feminists that are attacking the Traditions of the Orthodox Church. We didn’t pick them, they picked us. We have no choice but to defend the Church and its Tradition, or to raise the rainbow flag and surrender.

We do believe that the Orthodox Church is the True Church, and that the gates of hell will not prevail against it, but that does not mean that large parts of it, including our own, cannot fall into heresy and error, if we are not vigilant. It has happened more than once in Church history, and there is no reason to think that we are somehow immune today.

Today it is pro-abortionists, pro-homosexuals, and certain varieties of feminists that are attacking the Traditions of the Orthodox Church

The people of God are the guardians of piety, as the Encyclical of the Eastern Patriarchs of 1848 (in reply to Pope Pius the IX) states. It is therefore not only permissible, but obligatory for all of the faithful, and even more so for the clergy, to oppose these attempts to infect our Church with the same heresies that have wreaked such havoc in mainline Protestant Churches, and are in the process of doing the same in the Roman Catholic Church.

For more: Fr. Lawrence Farley, in a recent podcast, made this case very eloquently, and I would encourage everyone to listen to it: Magical Thinking in the Orthodox Church

And you can read it here: blogs.ancientfaith.com/nootherfoundation/magical-thinking-orthodox-church/

He also was recently interviewed by Fr. Chad Hatfield on the question of women’s ordination, and the historic order of Deaconesses: www.ancientfaith.com/podcasts/svsvoices/deaconesses