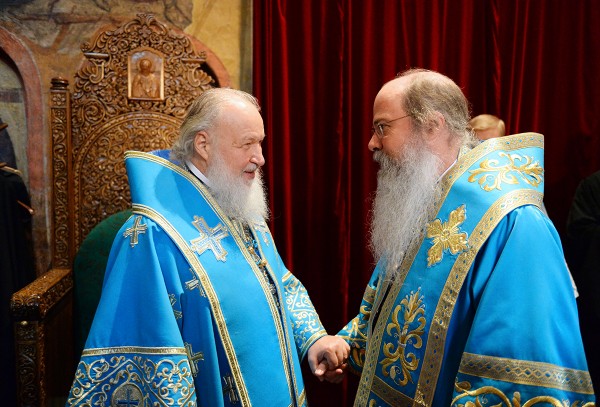 by Patriarch Kirill of Moscow and All Russia –
The task of our Churches is to pray and work in order that the Lord would grant His mercy on the peoples of our countries, so that God’s strength would make moral basics stronger, which originate in God’s morals of the Bible, and so that the relations between our countries would strengthen based on common moral values.

His Holiness, Patriarch Kirill of Moscow and All Russia, and the Most Reverend Tikhon, Metropolitan of Canada and All America, concelebrated the Divine Liturgy at the Dormition Cathedral of the Moscow Kremlin on December 4, 2014 – the feast day of the Entrance to the Church of the Most Holy Theotokos. Following the divine service, the Primate of the Russian Church delivered a sermon:

I would like to congratulate all of you, dear Reverend Vladyka, Emenences, fathers, and brothers, on the feast day of the Entrance to the Church of the Most Holy Theotokos!

The beginning of a special spiritual path of the Holy Theotokos is connected with this event, which we recall today. This is the beginning of Her way of the cross. God’s grace and Her own strength were necessary for Her to follow this path from Her childhood to Her Dormition. Since God’s grace is given to a person in return for his or her own efforts, the Mother of God had to, of course, prepare Herself for accepting this grace. The preparation began with the entrance to the Jerusalem church.

Currently, we are putting much effort into the construction of hundreds of churches in just the capital alone, the city of Moscow. It is quite a difficult task, but if it had been simple, it would not have been so significant and blessed, because overcoming these difficulties, we rise together with these churches and direct ourselves toward the Lord.

our Church has gone through decades of suffering and profession, but it has not faltered or cheated on itself

I would like to particularly thank those of our activists, including young people, who help in the construction of these new churches and participate in various social events, especially when people have doubts whether a church is essential or not, and when, under the influence of some external forces, a person suddenly starts answering to him or herself that he or she does not need a church, but a parking area or yet another shopping center. When this kind of discussion appears, it is crucially important that Orthodox people, including young people, our volunteers, are able to help people find the right answer.

I believe that despite the existent difficulties, the Lord will help us build new churches, create new liturgic and Eucharistic communities, and found parishes in our capital, and not only in it, but throughout the Russian Orthodox Church. Consequently, remembering the Entrance of the Most Holy Theotokos to the Church, we again and again refresh our understanding of how much the church of God is vital in a spiritual life.

May the life of our people and our Church be under the Protection Veil of the Queen of Heaven, new churches be constructed, and people strengthen their faith in order to save their souls by overcoming the troubles of disbelief and skepticism, in order to achieve a full and joyful life, which is what we are called to have by the Lord.

Today we have a great joy – the Most Reverend Metropolitan Tikhon, Primate of the Orthodox Church in America, has come to us on his official peaceful visit. The American Church appeared as a result of missionary work of the Russian Orthodox Church, and first of all, monks of Balaam. Around 220 years ago, they landed on the Aleutian Islands near Alaska and began their Orthodox mission. Today we remember especially the name of Herman of Alaska – a Balaam monk. Likewise, we remember the name of St. Innocent, Metropolitan of Moscow, who being born in Siberia devoted almost all of his life to mission among the peoples of Eastern Siberia, the Far North, and Alaska. We also remember particularly St Tikhon, Patriarch of Moscow, who served on the American continent for many years and put much effort into the formation and the development of the diocese of our Church in America, which was the beginning of the organized life of Orthodox people on the North American Continent.

Saint Tikhon ascended the Patriarch’s Throne on December 4, 1917 (New Style), on the feast day of the Entrance to the Church of the Most Holy Theotokos. It happened here, at this cathedral in the Kremlin, where tsars were anointed and primates of the Russian Orthodox Church were blessed. It is symbolic and remarkable that the American Metropolitan, whose name is Tikhon in honor of Patriarch Tikhon, is here today – the day of the enthronement of His Holiness Patriarch – and is concelebrating the Divine Liturgy together with us at this Moscow Dormition Cathedral.

we heartily wish that the Orthodox Church in America would preserve the fidelity to Christ, His Commandments

I would like to heartily wish you, Your Eminence, God’s help in your efforts. Serving on the American continent, you are a successor of St. Tikhon, just as I, being unworthy, is a successor of St. Tikhon in my service on the Moscow Throne. This alone connects our cathedras, our Churches, and our peoples in a special way. Orthodox Christianity is a crucial factor, including in the preservation of kind relations between Russia and the United States of America. All other factors are temporary. Sometimes they are considered to be positive and at another time of the history are considered to be negative. Therefore pragmatically kind relations between governments are established in a certain period, but sometimes these relations are destroyed. It is common for the outside world which does not follow God’s Law these days. However, true friendship between people and kind relations can only be established in human hearts.

We should preserve this as treasure, as something that is from the history, past, especially today when the relations between our countries have worsened drastically. The task of our Churches is to pray and work in order that the Lord would grant His mercy on the peoples of our countries, so that God’s strength would make moral basics stronger, which originate in God’s morals of the Bible, and so that the relations between our countries would strengthen based on common moral values.

That is why we endure the deviations from these God’s moral standards so painfully. The deviations take place both in the United States and other Western countries at the present time. It is a great challenge for Christian Churches. Many of them, especially Protestant organizations, fail to overcome this challenge – they follow the path of the renunciation of their own identity, refuse from moral values of the Gospel in favor of political fashion. But the Orthodox Churches cannot do this and therefore the Orthodox Churches encourage people to profess the faith. We have a right to speak about it like this here at this cathedral, because our Church has gone through decades of suffering and profession, but it has not faltered or cheated on itself.

That is why we heartily wish that the Orthodox Church in America would preserve the fidelity to Christ, His Commandments, and would be, if not very bright and strong, but still light for its people. We are aware that even the light of a small candle becomes a powerful point of reference and helps people find their way to salvation.

I sincerely wish you, Your Eminence, your episcopate, and the whole Orthodox people of America strength, spiritual and physical firmness, and assistance in bearing the Orthodox witnessing on the American continent.