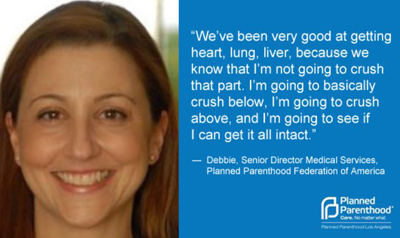 “If God does not exist, then everything is permissible.”

Ivan Karamazov’s insight came to mind while watching the video of Deborah Nucatola of Planned Parenthood describe, as she sipped wine and tasted a salad, how she harvests the organs of aborted babies for sale to select customers.

“Yesterday was the first time … people wanted lungs,” said Nucatola, “Some people want lower extremities, too, which, that’s simple. …
“I’d say a lot of people want liver. … We’ve been very good at getting heart, lung, liver, because we know that, so I’m not gonna crush that part, I’m gonna basically crush below, I’m gonna crush above, and I’m gonna see if I can get it all intact.”

Nucatola is describing how an unborn baby should be killed and cut up to preserve its most valuable organs for sale by its butchers.

Planned Parenthood’s image — a progressive organization that provides free birth control to women who seek to space pregnancies as they plan their families — will not easily survive these tapes.

Watching these tapes, one name comes to mind: Mengele.

For Nucatola sounds as though she were reading from a film script about a 1940s clinic in Nazi Germany devoted to the disposal of “useless eaters” in the Third Reich.

Watching these tapes, one name comes to mind: Mengele.

Defenders of Planned Parenthood argue that those who taped Nucatola did so surreptitiously, and they misrepresented themselves as buyers from a human biologics company. Moreover, the tapes were deceptively edited and the women undergoing abortions had agreed to donate the organs of their dead fetuses for biomedical research.

Perhaps. But even if all of that is true, the tapes have thrown the “pro-abortion rights” movement in America onto the defensive and brought calls for complete Congressional defunding of a Planned Parenthood that receives $500 million yearly from taxpayers.

Do Americans want hundreds of millions of tax dollars provided to an organization that harvests and sells the body parts of aborted babies as a potentially lucrative sideline business?

That Americans were stunned by those tapes is undeniable. People are not faking their moral revulsion. Indeed, “pro-abortion rights” Democrats are hiding in the weeds because they rightly sense that the disgust is widespread and genuine.

Yet there are questions raised by what these tapes reveal that apply to all of us.

Were we really in the dark? Were we unaware that 55 million unborn have been killed since Roe, many by such crushing methods as described by Nucatola?

Is the Black Lives Matter movement unaware that the execution rate of babies in the womb is highest among African-American women? However many black men or boys are killed in clashes with cops each year, it is not one-tenth of 1 percent of the black babies aborted in the USA?

But if one believes an unborn baby is not a human being, not a human life, why object to selling its body parts?

Did we think that these abortions were almost all painless, like some sick pet being put to sleep, euthanized? Did we not know that the abortionist stabs the baby in the womb, or tears it to pieces coming out? And the more developed the baby, the greater the pain and the suffering and the bloodier the inescapable death?

But if one believes an unborn baby is not a human being, not a human life, why object to selling its body parts?

Trash haulers and garbage men find uses for what they pick up. Scrap metal collectors find folks who want to buy it. Conservation they call it. Why would we think that abortionists, who regard fetuses as human tissue, not human beings, were any different?

We have long known and praised family members of the victims in auto accidents who volunteer the organs of their loved ones to save or extend the lives of others.

What makes this tape so different, so appalling, is that, at some level, there a sense in all of us, which ideological indoctrination cannot wholly suppress, that, morally, something terrible is happening here.

the butchered children had no say in the decision to be torn to pieces and have their organs put up for sale to a laboratory that was the highest bidder.

Listening to that Planned Parenthood woman discourse casually on the hearts, livers, lungs and lower extremities, we know something else. While the women undergoing the abortions at Planned Parenthood may have volunteered those body parts, the butchered children had no say in the decision to be torn to pieces and have their organs put up for sale to a laboratory that was the highest bidder.

Speaking after the fall of France, at the beginning of the Battle of Britain, Winston Churchill said, “But if we fail, then the whole world … including all that we have known and cared for, will sink into the abyss of a new Dark Age made more sinister, and perhaps more protracted, by the lights of perverted science.”

Those phrases, “perverted science,” and “a new Dark Age,” do they not fairly describe our future if the views and values of Nucatola’s Planned Parenthood are the future of America and her people?