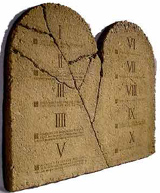 by Danny Lemieux –
One of the fundamental problems in our society is that we argue with one another from positions of moral parochialism: we assume that the other party shares our frames of reference. That may have been true in the earlier years of our nation, but I propose that this is no longer the case. Today, we argue from different and fundamentally incompatible moral codes and value systems. It is the dichotomy between the two that confuses our discourse and creates great dangers for our country.

Many political and social arguments today seek to accommodate two fundamentally incompatible and opposite moral codes: a Judeo-Christian code and a Marxist-Progressive (“MarxProg”) code. When we on the Judeo-Christian side of the equation appeal to terms such as “good,” “evil,” “right,” and “wrong,” we usually fail to realize that they mean entirely different things in the MarxProgs’ lexicon.

Unfortunately, the MarxProg code has been ascendant in the U.S. since at least the late 19th Century (even among conservatives), whereas the Judeo-Christian code has been in steady decline. Most people today struggle to understand the world when it’s filtered through the competing perspectives of these two value systems: hence, the confusion. If we want to progress with our ideas, we need to better understand the “why” of this divide.

The Judeo-Christian code, buttressed by deep roots into Ancient Greek moral philosophy, is an ethos that emphasizes each person’s singular worth and his accountability to a higher authority (God). This person-centered moral code views individuals as agents of their own destiny with the capacity and responsibility to choose between right and wrong and to suffer consequences for their actions. Even when some people do not accept this ethos, it still defines much of our national character. For now, anyway, most of us still elevate and extol the individual, not the group.

The MarxProg code, which took form in the 1700s with the writings of Swiss philosopher Jean-Jacques Rousseau, rejects Judeo-Christian definitions of “good” and “evil,” “right” and “wrong,” “virtue” and “character”: in the MarxProg world view, such terms are largely meaningless. Instead, their moral code breaks down as follows:

Materialist:
MarxProgs place a militant emphasis on material wealth and power, which they believe underpins all human motivation and defines right and wrong, despair and happiness. This frames their ideological and political approach to everything from poverty to Islamic fundamentalism.

Whereas Judeo-Christians emphasize the virtues of thrift, rectitude and industry, and decry the corrosive impact of the seven deadly sins (including the envy and idolatry of materialism) on the soul, MarxProg solutions to society’s ills (think “social justice”) inevitably revolve around reapportioning power and material stuff, and stoking envy and resentment between groups so as to create “equalizing” forces. Ask a MarxProg what lies at the root cause of crime and violence and he’ll answer “Imbalances of power and wealth.” Ditto for foreign affairs, where the solution to every international crisis devolves into demands for material rectification, as if a Vladimir Putin can be enticed away from hundreds of years of Russian history and experience by the denial of stuff (i.e., economic sanctions).

The MarxProg universe has no room for individual sin and virtue. The solution to “sin” is simply to equalize power differentials between groups (with one exception that I address further below). Thus, strong powers like America must be diminished, while true evil (in the Judeo-Christian view), such as Russia’s imperialism and Islamic fundamentalism, must simply be managed into states of power and wealth parity. In this way, the wealthy, modern and democratic State of Israel comes to define a MarxProg evil when compared to a weak, materially-deprived and oppressive Palestinian state . . . at least, that is, until Israel can be beaten-down to power parity with its sworn enemy. In MarxProg world, Utopia is attainable only through the redress of power and wealth imbalances.

This same corrosive, materialistic worldview has infected far too many Judeo-Christian churches and synagogues today. Recall “liberation theology”: Through the distorted MarxProg lens, the Christian beatitudes transform into an exhortation to social justice and wealth redistribution rather than a sermon on the transcendence of faith, while the deep human insights of King Solomon’s proverbs can be ignored as quaintly démodé.

Collectivist:
The MarxProg code defines humanity not as individuals but in terms of group identities, to be swayed and manipulated as one. Individuals are no longer held responsible for their individual decisions, but are forever fated to be judged by their group identities. Such groups are arranged hierarchically by easy-to-apply labels (e.g., religion, race, ethnicity, power and wealth) as they apply to groups. For example, if you are black, you are by definition poor and oppressed by white people. Thus does the Ivy League daughter of a wealthy black dentist in Washington, DC attain victimhood status over the GRE-holding son of an out-of-work, Appalachian coal miner. Oprah Winfrey and other black celebrities may be very rich and privileged, but they can still claim victimhood status under this MarxProg code by virtue of their ethnicity.

There are two other aspects of this collectivist MarxProg ethos that run directly contrary to the Judeo-Christian moral values: One is group “guilt”. Whereas the Judeo-Christian code considers it wrong to hold children responsible for the sins of their parents, the MarxProgs will apply all the burdens of sins committed by past generations to their living descendants. Think of white Southerners as a group carrying the burden of a 19th century slaveholder, or today’s Christians being blamed for the Crusaders and Spanish Inquisition.

The second aspect is the dehumanization of individuals subsumed into the group. Individuals defined by group identity become expendable. We see this at play when shooting victims have greater or lesser human worth depending on their skin color. More problematically, we see this MarxProgs’ historical fondness for eugenics, abortion, euthanasia, ethnic cleansing, and other schemes of social engineering to diminish or destroy individuals in the name of group “rights.” Even today, Progressive “thinkers” advocate aborting or euthanizing people with defects, or try to deny healthcare to the elderly or veterans, all in the interest of budgetary constraints and other social priorities. In MarxProg Utopia, there are no individual rights, only collective entitlements and obligations.

Classist:
Finally, the MarxProg code arranges collective groupings into three different umbrella classes: The oppressed, the oppressors and the — wait for it…drum roll! –

Champions of the Oppressed (let’s call them “COOPs.”)

The COOPs represent a self-anointed Brahmin class that encompasses the Liberal-Progressive elites. These are aristocrat wannabees who hold themselves above the fray as the “new order” unfolds. Membership fees in the COOP class are low: All one needs to do to qualify as a COOP is to publicly espouse the MarxProg Creed and donate to the right cause.

To be a COOP, then, one needs only to talk the talk, not walk the walk. Thus, morally saved COOPs from the Hollywood Left to Al Gore are free to burn hydrocarbons to their hearts’ content. They’ve earned their indulgences.

COOP membership serves as a writ of absolution for all individual actions and consequences. One can be filthy rich, drug-addicted, slum-lording, environment polluting, capitalist, vicious, immoral, exploitive or even a murderer, but it doesn’t matter. Being a COOP earns you a free pass and (bonus!) a self-affirming moral plane well above the rest of us social riff-raff struggling in the trenches of real life.

We Judeo-Christians can refer to all this as cheap-grace hypocrisy, but it’s irrelevant. They don’t care. It’s not within their moral lexicon or world vision to comprehend. As the Old Testament instructs, “all is vanity…and what is crooked cannot be made straight.”

Most Americans, as I suggested earlier, do not fall completely on one side or the other of either moral code, but instead flounder in a complicated and contradictory morass between the two. They are, understandably, confused.

On a domestic level, this confusion is bad enough, as for example, believing that seemingly intractable problems such as poverty, bad schools, broken families or lack of job skills (caused by imbalances of material wealth and power) can be solved by throwing money (material stuff) at the problem and enriching self-proclaimed activists and demagogues (COOPS) to empower the “victims” with anger, resentment and envy (those equalizing forces of the Left). This attitude perpetuates the problem, but doesn’t spell America’s imminent demise.

At an international level, though, this confusion may prove to be our Achilles Heel. I recall after the 9/11 attacks, one of my parish priests tried to convince me that the solution to Islamic terrorists (collective label) was to send them foreign aid (materialism) to show that we, the West (oppressor), could readily resolve their (the oppressed) grievances (material needs and power) in a peaceful manner. So, the good Reverend’s solution was to send material aid to Saudi Arabian Islamists. Really!

It is from this same perspective that our current president maintains that the solution to ISIS is not to destroy its members but, instead, to reduce their power to manageable, more-equitable levels. Everything else is, apparently, negotiable. Similarly, the MarxProg solution to a Vladimir Putin is to try to deny Russia material goods through sanctions, blind to the fact that Russia’s historic survival always depended on keeping its border far from the capital and its enemies smashed under the mailed fist. Heads up, Mr. President! In both cases, it isn’t and never was about “stuff.”

Frankly, much of the frustration that we observe in Washington and Brussels today is because it is becoming clear that the MarxProg model of the world isn’t working, never will work, and never could work. Being fully vested in their parochial MarxProg worldview, its proponents are incapable of applying alternate ways of understanding and dealing with the world. They no longer understand what is happening. It’s not just that they cannot understand benign Judeo-Christian conservatives; they also fail to understand the moral codes, ergo the motives, that define Russia, China and the Islamic world. So they flounder. And our enemies grow stronger.

Putative conservatives, too, succumb to the MarxProg rationalizations that have gained incrementally on our society and worldview. I recall the moment that I relinquished my hope that Colin Powell, a man whom I still greatly admire, could ever qualify to be our first black President. It was during the aftermath of the Iraqi evacuation of Kuwait, when our A-10s and choppers were wreaking havoc on the retreating elements of the Saddam Hussein’s Republican Guard. In the minds of Powell and President Bush-I (COOPS), the evacuees were transformed by our air power from evil incarnate (oppressors, to be destroyed, like the SS in WWII) into the oppressed victims — so Powell persuaded Bush to halt the attacks.

As the Talmud advises us, “kindness to the cruel is cruelty to the kind.” The Iraqi Republican Guard survivors went on to slaughter 100,000-plus Shiites after the Shiites, acting with American encouragement, rebelled against Hussein, thereby setting the stage for the next conflict and all of its sad, bloody consequences today. Bush’s and Powell’s fateful decision convinced me that their moral confusion would cause them to choke when history and Judeo-Christian morality demanded that they be capable of making hard moral and strategic decisions between “bad” and “worse.”

In the Judeo-Christian worldview, very few decisions made are all good or all bad. The hard moral choices are usually made between very bad options. Aristotle long ago said that a person or nation’s “character” is etched in marble by a thousand decisions made and a thousand decisions made thereafter. I fear that, in our moral confusion, we have become less and less capable of making the very hard, unpleasant choices that we will need to make in order to survive as our nation. And that confusion threatens our national character.

But, of course, “character” is a Judeo-Christian value judgment.