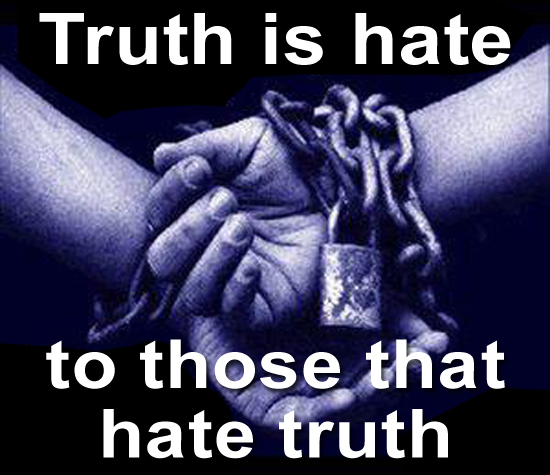 by Trevor Thomas –
The convictions of modern liberalism are numerous and growing: abortion, homosexuality, hook-ups, same-sex marriage, gender confusion, man-made global warming, universal healthcare, income redistribution, and whatever is the next perversion or deceit that will strike at the heart of biblical truths.

When it comes to political “wars,” in spite of the meme perpetrated by most liberals, no one is more hawkish than modern liberals and the political party that they own, the Democrat Party. By and large since the 1960s, their efforts are summed up by one succinct and extremely accurate appellation: a war on the truth.

In the history of our nation, only the pro-slavery Democrats of the 19th century rival the political deception employed by today’s liberals that lead the modern Democrat Party. Support of everything from abortion, to gender perversions, homosexuality, pornography, a redefinition of marriage, wicked climate policies, and an enslaving welfare state have made today’s Democrat Party little more than a modern-day Mephistopheles. Instead of magic to lure their Faustian targets, today’s Democrats employ, among other things, bribery, class warfare, fear, greed, lust, propaganda, scientism, vengeance, and violence.

When your politics regularly conflict with absolute truth, constant deception is required.

This is really unsurprising. When your politics regularly conflict with absolute truth, constant deception is required. The evidence is, of course, all around us. This is especially the case given that we are in the midst of another election season. Take note of the political ads run by Democrats. How long before we get to meet the next Julia or Pajama Boy? How many times will we get to hear about, if elected, what Democrats will do in order to give out more goodies from the government? Where will the next fraudulent statistics in the “War on Women” originate?

How much “linguistic limbo” will Democrats perform in order blandly to describe their embracing of the “right” to kill children in the womb? (Or they simply video their abortions and tell us that everything is “super great!”) What deceit will liberals use to explain or embrace the fiscal and medical disaster that is Obamacare? How many times will we get to hear the phrase “marriage equality” (knowing full well that the liberal position on marriage also “”)?

How far away will Democrats attempt to run from what they really are in order to keep themselves in power? Liberals all over the country are running from Obama and their own party in an attempt to win elections. As most who are following this election season know well, Democrats are going so far as to avoid the label “Democrat” or even admit that they voted for Obama.

liberalism has created a culture that is nearly bereft of shame

In Kansas, Greg Orman is a Democrat running as an Independent. He has shamelessly refused to say with which party he would caucus if elected. “Truth makes the Devil blush,” wrote the English historian Thomas Fuller. As liberalism has created a culture that is nearly bereft of shame, today’s Democrats rarely blush, even as they mock their wheelchair-bound opponents. This usually happens only when someone becomes a political liability (as did the Democrat candidate that Orman replaced) and not because some proper moral standard has been violated.

If Orman does win, as the Wall Street Journal notes, he will most certainly owe his election to Washington Democrats. Kentucky Democrat Alison Lundergan Grimes squirmed like Jim Carrey in Liar Liar as she attempted to avoid revealing to the Louisville Courier-Journal editorial board whether she voted for Obama in the last presidential election. Mary Landrieu and Michelle Nunn have played similar games as they try to win U.S. Senate seats in conservative states.

Given how far our culture has fallen morally, getting elected in the United States these days is much more challenging when you are accountable to absolute truths. As I noted earlier this year, because their moral bar is so low and easily adjusted to whatever is politically popular, liberals today generally have an easier time “playing politics” than conservatives — especially Christian conservatives.

When asked recently how to break the stalemate in the culture war that divides American conservatives and liberals, Catholic scholar George Weigel replied, “When you have a gnostic philosophy that ignores the very fabric of reality — and it is wed to a coercive state — it’s hard to know where to go.”

Ignoring “the very fabric of reality” is a frequent practice of modern liberals.

Ignoring “the very fabric of reality” is a frequent practice of modern liberals. Liberalism is so far removed from truth and reality that many liberals today can’t even acknowledge explicit evil when confronted with it. Ben Affleck has plenty of company among his fellow leftists when it comes to denying the rotten fruit of Islam. As the recent exchange with fellow liberal Bill Maher illustrated, many American liberals, in the name of the supreme virtue of liberalism – tolerance — will eagerly and angrily deny lesser virtues of their “faith.”

“Tolerance is a virtue of a man without convictions,” wrote G.K. Chesterton. A “man without convictions” who frequently “ignores the very fabric of reality” and who is enthusiastically “wed to a coercive state” is an apt description of modern liberals, but not perfect. In spite of what they themselves might think — lost in their fallacy that is today’s tolerance — liberals are not completely tolerant, and thus not devoid of convictions.

Tolerance is a virtue of a man without convictions

The convictions of modern liberalism are numerous and growing: Abortion, homosexuality, hook-ups, same-sex marriage, gender confusion, man-made global warming, universal healthcare, income redistribution, and whatever is the next perversion or deceit that will strike at the heart of biblical truths.

“We hold these truths to be self-evident” helped launch the American Revolution. If America is to remain, we need a spiritual revolution bringing us back to those truths that were once so “self-evident.”

1 thought on “Liberals, Progressives, and Leftists Wage War on the Truth”