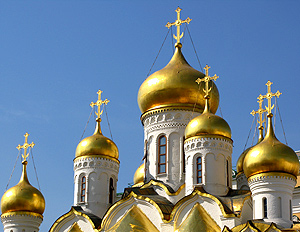 by Texas Orthodox Priests –
Statement of the Brotherhood of the Orthodox Clergy Association of Houston and Southeast Texas on the Comments of Fr. Robert Arida on Homosexuality

In response to Fr. Robert Arida’s recent article, which was posted on the OCA’s Wonder blog, there have been many eloquent rebuttals.  We do not wish to attempt to reproduce those critiques here, but we do wish to underscore some of the more important points that have been made, and to speak out publically on this controversy.

We find it unacceptable for Orthodox Clergy, who have been given the charge to instruct and guide the laity, to suggest that the moral Tradition of the Orthodox Church needs to change with the times or with the prevalent culture. St. Paul admonishes us to “be not conformed to this world: but be ye transformed by the renewing of your mind, that ye may prove what is that good, and acceptable, and perfect, will of God (Romans 12:2). And it should be noted that the word translated “world” is not “kosmos” (the material world, world order, or people of the world), but  “tō aiōni” which refers to the age (or generation, or time) in which we live. And we have no better guide as to what the good, acceptable, and perfect will of God is than we find in the Scriptures and Tradition of the Church.

Fr. Robert Arida’s recent and past statements on the issue of homosexuality are a scandal to the faithful.
It is also contrary to our Tradition to write about matters of faith or piety in ways that are intentionally ambiguous – this is rather the approach of liberal Protestantism. As Sergey Khudiev wrote, in response to a previous statement by Fr. Robert Arida, which was likewise replete with studied ambiguity, liberal Protestants have “a particularity which entails a tendency to explain themselves with rhetorical questions, vague allusions and highly mysterious phrases from which you can with more or less justification guess at their positions, but are unable to explain clearly.”1

We are all the more concerned that members of Fr. Robert Arida’s parish who identify themselves as homosexuals, report that though they make no secret of their ongoing homosexual relationships, they are freely communed. One such person, wrote, on an open Facebook group (named oxymoronically “Pro-Gay Orthodox Christians”): “I am gay… I was married to my husband in a civil ceremony in 2005. When I began attending Holy Trinity later that year I was completely up front with the priest. My husband, Martin, began attending liturgies regularly about two years ago. He was chrismated Holy Saturday earlier this year. Our relationship is not a secret; I have had no negative interactions with either clergy or laity in this parish. Martin and I are not the only gay people in the parish, though after Martin became Orthodox, we are the only Orthodox gay *couple* as far as I know. I don’t think this constitutes “don’t ask don’t tell.” More like “ask or tell whatever you like… we don’t care.” Just saying.”2

the consistent teaching of the Scriptures, canons, and the fathers and saints of the Church that homosexual sex is inherently sinful is clear and unambiguous

Fr. Robert Arida’s recent and past statements on the issue of homosexuality are a scandal to the faithful. They also present those who are sincerely struggling against homosexual temptations with additional temptations, and misdirection. As a pan Orthodox organization, we are also concerned that such blatant disregard for the Scriptures and the Tradition of the Church present further obstacles to Orthodox unity in America. We can only unite around a common fidelity to the authentic faith and piety of our Tradition. If we are not united in that, then authentic unity is impossible.

This is not a matter that can be swept under the rug of “theologoumenon.” A theologoumenon is an opinion that may or may not be correct, but which is neither an authoritative teaching of the Church, nor is it outside of the bounds of acceptable Orthodox opinion. Suggesting that homosexual sex may not really be a sin is not within the bounds of acceptable Orthodox opinion, but on the contrary, the consistent teaching of the Scriptures, canons, and the fathers and saints of the Church that homosexual sex is inherently sinful is clear and unambiguous.

We pray that the Bishops of the OCA will deal with this matter with the seriousness and urgency that it warrants, and put an end to these abuses.

We recognize that those who are struggling against homosexual temptations should be treated with pastoral patience, mercy, and love… as should sinners of any kind that are repenting of their sin, and seeking spiritual healing. However, suggesting to any sinner that their sin is not really a sin, and that they need not repent of it in order to worthily receive the Mysteries of the Church is pastoral malpractice, and cannot be tolerated.

We pray that the Bishops of the OCA will deal with this matter with the seriousness and urgency that it warrants, and put an end to these abuses.

This statement was approved unanimously by those present at our November 11, 2014 meeting, and other clergy who are members of our clergy association, who were not present, have asked to have their names added as well, more names may be added later.