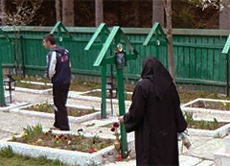 As reported by the Adevărul news organization, the exhumed body of Fr. George Calciu has been reburied to prevent further church scandals and punitive legal action by Andrei Calciu, Fr. Calciu’s own son. The premature sainthood claims have not been substantiated. The Romanian Orthodox Church has not issued any official statements regarding this incident.

Fr. Calciu’s body was previously dug up without the permission of his family and against Fr. Calciu’s own express wishes not to disturb his grave. Upon unearthing his mummified remains, premature claims of “sainthood” began to circulate in the mass media both in Romania and the United States. However, scandal also ensued for failing to abide by Fr. Calciu’s own testamentary provisions and ignoring his son Andrei’s instructions not to exhume the body.

From the beginning this situation was controversial. Priests and monks at the Petru Vodă Monastery (where Fr. Calciu’s grave is located) disagreed on the meaning and significance of this discovery. Some priests think the “relics” should not be re-buried, since saints should not be reburied. “Some say we should bury him, others say leave only a piece for veneration. We cannot agree,” said Father Teodot.

The scandal worsened when Andrei Calciu, upon hearing of the exhumation of his father’s body, threatened legal action against the monastery and the monks. Invoking his father’s will, Andrei got in touch with the monastery and threatened to sue, hinting that he is also ready to seek monetary damages. “In addition we woke up to a flurry of calls from the media, while the police made inquiries regarding potential desecration of graves,” said Abbot Hariton Negrea from Petru Vodă Monastery.

On the evening of December 10, the monastery brotherhood (priests and monks), 80 strong, finally met and resolved to rebury Fr. Calciu and prevent further scandal. By an overwhelming vote of 80 to 4, (the 4 who voted against were the four individuals who originally dug up the body on their own initiative) the monastery congregation decided to rebury the body. Furthermore, the four individuals responsible for the unauthorized exhumation of the body were sanctioned with a 30 day period of prayer and repentance for their role in the incident. Adevărul reports (translated from Romanian):

Tuesday evening, December 10, the monastery congregation met to discuss the situation, and with an overwhelmingly vote (80-4) decided that the body be reburied.

“Only a monk and three brothers of the monastery voted against it, these were the ones who took the initiative to exhume the priest’s body. We assume they did this out of a an excess of piety. Instead, these individual must engage in “epitimia”, ie a period of 30 days of prayer and penance, “said Father Hariton Negrea, abbot of the Monastery of Petru Vodă.

In father Calciu’s testamentary provision were precise instructions in the event that someone would ever disturb his tomb.

The priests who have seen my [incorrupt] body should be bound never to speak about this false miracle and my body should be placed into another grave and forgotten forever,” wrote Fr. Calciu in October 2006 to Father Iustin Pârvu from Petru Vodă Monastery.

Another potential explanation for these strange circumstances comes from an article forwarded to OrthodoxNet by an Orthodox priest in Romania. This information provides the strongest clue why Fr. Calciu’s issued such disturbing premonitions just a few weeks before his death, warning of a false miracle, a sign “not from God but a deception from the Evil One,” if his body was ever dug up and found incorrupt. As Anton Constantinescu in the Curaj.Net observes, Fr. Calciu never disclosed the full truth of his involvement or repented publicly for his original role as a ruthless communist informer and dangerous prison re-educator, who persecuted and terrorized other innocent political prisoners in communist prisons.

The central idea of ​​”re-education” was that victims become criminals [torturers].

There is a rich literature on the [Pitesti] “experiment”. I do not want to get into it. It seems that the vast majority of those tortured in Pitesti became in turn torturers also. That was the main idea.

Even the priest Calciu-Dumitreasa [Fr. George Calciu] was at Pitesti! And there is evidence that he turned informer!

It would have been very instructive if he at least would’ve died in peace with his conscience, if he had confessed [his sins], but that was not the case!

Fr. Calciu so-called Dumitreasa, wrote a few things about that experiment [at Pitesti], but he never opened his soul to tell the truth [about what happened]. Those who knew him said that whenever the subject of conversation turned to the “experiment”, he would start crying and he would stop talking! But he never acknowledged his “sins” never!

The testimony about Fr. George Calciu’s original role as a communist informer, dangerous re-educator, and enthusiastic persecutor of other political prisoners is provided by Dumitru Bacu in his book The Anti-Humans:

Among the re-educated in our cell, the most dangerous at that time was one Gheorghe Calciu, a former medical student nicknamed “L’Eminence grise [1] [Dark Eminence] of Director Goiciu. ” He was one of the most devoted and determined products of re-education, and to some extent he took Turcanu’s place. But in the cell, he was not at all on the defensive, as were the others in his group, he was in fact relaxed, almost jovial. He went so far, one afternoon, as to recite the well-known poem by Makarenko, the “Pedagogical Poem!” [2]

Without going into the cultural value of this verse, the very fact that he would dare to mention a Soviet writer in the cell, even one very much appreciated by the Party, brought laughter, at least for the time. Everyone began comparing Makarenko’s “pedagogy” to Turcanu’s, and the unmaskings at Pitesti were then and there labeled “Pedagogic Poem. ” It wasn’t very long before Turcanu was being called, in the cell, “Evghenii Simionov Makarenko,” and if someone wanted to know whether you had passed through unmaskings, he asked if you had read the Pedagogic Poem. This allusion implied, of course, that the system of re-education was also of Soviet origin.

If Calciu could no longer even “in part” apply his re-educative methods in our cell, still he could not be prevented from keeping under perfect control those who had been his collaborators in the workshop. He did not stay in the cell very long; he was taken out by the political officer and sent to the infirmary. After his departure the atmosphere cleared completely, and the rest of the re-educated, little by little, without being pushed, or even challenged, began to find themselves. The month of May came, and with it an almost complete healing of wounds with the integration of almost all who had undergone unmasking, into the normal monotony of prison life.
(The Anti-Humans by Dumitru Bacu, CHAPTER XXVII – ENDLESS ISOLATION)
http://www.miscarea.net/anti-humans.htm#h27

In all likelihood, Fr. Geroge’s Calciu’s own premonitions and warnings one month before his death offer the most plausible explanation for this mystery:

“The devil might use popular mythology to prevent my body from rotting and then the latter error could be greater than the former. If over the years, some construction needs or for other reasons, my body will be dug up and, to the astonishment of many, it will be incorrupt, priests must read prayers over it for the undoing of this curse, to allow the body to decompose into the earth it was made from, since this [incorruption] is not from God but a deception from the Evil One.

The priests who have seen my [incorrupt] body should be bound never to speak about this false miracle and my body should be placed into another grave and forgotten forever,” written in a letter [by Fr. Calciu] from his hospital bed to Father Justin Parvu.