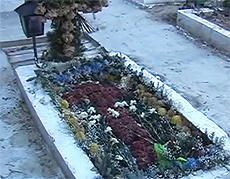 by Chris Banescu –
While some Orthodox in America and in Romania have already rushed to label the discovery of priest George Calciu’s incorrupt body as a miracle and declared him a saint, Fr. Calciu’s own premonitions and ominous warnings call for a more sober and discerning response. Not all ‘miracles’ come from God and not all incorrupt bodies are a sign of sanctity.

One month before his death, Fr. George Calciu (Fr. Gheorghe Calciu Dumitreasa), in a letter from his hospital bed written to another priest, Fr. Iustin Pârvu, warned that if his body would ever be dug up and found incorrupt, it would not be a miracle from God, but a deception from the devil. Fr. Calciu asked that Orthodox priests should then pray over his ‘relics’ for the undoing of this curse and to allow his body to return to the dust from which it was made. He further gave precise instructions that the priests who saw his body should never speak of this false miracle and bury him in another grave.

The following excerpts, from a detailed news story in Romania (my translation, but you can use Google Translate also), highlight the brewing scandal among the priests regarding these “relics” and Fr. George Calciu’s own forewarnings that such a false miracle is not from God but the Evil One (emphasis mine).

“Then the scandal started. Some priests think the “relics” should not be re-buried, since saints should not be reburied. “Some say we should bury him, others say leave only a piece for veneration. We cannot agree,” said Father Teodot.

Premonition or not, Father [George] Calciu Dumitreasa foresaw this one month before his death and the likelihood that his body would be “disturbed” from the grave. He gave precise instructions in regards to this exact situation.

“The devil might use popular mythology to prevent my body from rotting and then the latter error could be greater than the former. If over the years, some construction needs or for other reasons, my body will be dug up and, to the astonishment of many, it will be incorrupt, priests must read prayers over it for the undoing of this curse, to allow the body to decompose into the earth it was made from, since this [incorruption] is not from God but a deception from the Evil One.

The priests who have seen my [incorrupt] body should be bound never to speak about this false miracle and my body should be placed into another grave and forgotten forever,” written in a letter [by Fr. Calciu] from his hospital bed to Father Justin Parvu.

2 thoughts on “Fr. George Calciu: My Incorrupt Body a False Miracle, a Curse”