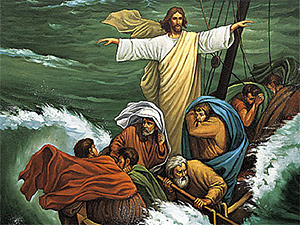 by Fr. Basil Zebrun –
Following His Resurrection Jesus said to the apostles, “peace be unto you” (John 20: 19,21,26). Furthermore, He distinguishes the peace He bestows from that which is given by the world (John 14: 27). St. Paul describes it as, “…the peace of God which passes all understanding” (Philippians 4:7). Christians experience this peace as not merely the absence of fear or strife, but the presence of Christ in the lives of the faithful.

Additionally, during a storm at sea Jesus offered His disciples these words of comfort, “fear not” (Matthew 14:27, Mark 6:50, John 6:20), and prior to raising Jairus’ daughter from the dead He said to the father, “Do not be afraid” (Mark 5:36). At the Annunciation and at the announcement of the Baptist’s conception, the angel also reassured both Mary and Zacharias that there was no need for trepidation (Luke 1).

The statements, “peace be unto you” and “fear not,” were meant to allay the personal anxieties of those whose lives were radically changed by divine grace, freely received.

Christ’s words of peace are repeated at each liturgical service in the Orthodox Church. On occasion one is tempted to say that “fear not,” should be added as well. Our society in general is far too acquainted with fear, and unfamiliar with the peace of Jesus Christ. We live daily in fear of crime, terrorism, war, an uncertain economy, as well as apprehension from urban isolation, from not knowing — and thus not trusting — family and neighbors.

Beyond this, fear is used as a powerful tool, driving personal, political and corporate agendas. Those with agendas often find it easier to motivate people out of fear, rather than out of concern for doing the right thing; to unite people against a perceived enemy — real or imaginary — rather than to rally them around peaceful, constructive goals. People who otherwise have nothing in common find mutual ground against a shared opponent. An ancient proverb comes to mind: “the enemy of my enemy is my friend.” Knowledge of such predictable behavior serves as a basis from which to evoke desired responses from select individuals.

As part of the fallen human experience, fear is also a reality in the life of the Church. Christians face the aforementioned anxieties, in addition to the common fear of human interaction, acceptance and/or rejection by others; fear of change, of “letting go,” i.e. divesting oneself of non-essentials for the Gospel’s sake; an overwhelming fear of God’s wrath in churches where divine retribution is a constant theme; fear of persecution and martyrdom for Christ; and fear of death generally, with no expense or effort being too great to delay the inevitable, or to make death as painless as possible.

There are those, however, who have risen above personal insecurities, suspicions, threats from non-believers, and anxieties over death. Many who conquered their fears through love and faith, we call saints. They provided examples of courage that we strive to emulate. They knew, as well, a healthy “fear of the Lord” that is “the beginning of wisdom” and which leads to life. (Proverbs 1:7; 9:10; 19:23).

Fear, however, creeps into the Church’s life in other ways. Tragically, as with society at large, it can be used in varying degrees to drive agendas — personal and political — even within the Body, to divide one Christian from another.

Additionally, fear is brought in from the outside, as a vestige from the past in the lives of many who convert from other faiths. In such cases fear may lead to “going on the defensive,” assuming that Orthodoxy is easily susceptible to trends adversely affecting non-Orthodox churches. Thus, at times one encounters knee jerk reactions — personal efforts to guard the Church — against legitimate threats, but also against what could be considered normal, healthy activity within the life of the Body.

A few specific examples of the latter readily come to mind, but we will cite only one.

Approximately two decades ago one of our seminaries held a conference concerning, “The Role of Women in the Church.” The theme seemed innocent enough and useful. People have questions about parish ministries, as well as Orthodoxy’s understanding of both men and women serving the Body of Christ. Thus, a conference devoted to such a topic appeared quite beneficial.

That year a guest editorial was printed in an Orthodox paper, written by a member of the Orthodox Church in America. His former faith had gone through major changes, among which was the “ordination” of women to the priesthood. The article was somewhat harsh, but primarily defensive. He emphasized that the seminary gathering, with its focus on women, was an example of activities that could open the floodgates for women’s ordination in the Orthodox Church.

Although to some extent I understood his mindset, I disagreed with his predictions of doom. His words constituted a warning based on prior experiences in another Christian group. In response to similar situations a friend of mine used to remind people, “Yeah, but that isn’t the Orthodox Church;” a significant comment, surrounded as we are by countless faiths from which we receive many into Orthodoxy.

His reasoning was that the One, Holy, Catholic and Apostolic Church is unique and unrepeatable. It is the Body of Christ, and strictly speaking, cannot be equated with other churches. Furthermore, having survived two thousand years of every imaginable persecution and hardship, the Church itself has nothing to fear, particularly from sincere questions by the faithful, and open (reasonable) dialogue. While regretting what happens outside the Orthodox Church, its members should never deny, out of fear, the power of a living Tradition to address contemporary issues in a forthright manner. They should never limit the work of the Holy Spirit as the One Who guides the faithful into all the Truth.

It is a great blessing that we are free and possess the means in this country to convene conferences devoted to “Women in the Church,” or to other worthwhile topics, having ready access to knowledgeable theologians, clergy and laymen. Education and open (reasonable) dialogue on theological, moral, even political issues, are to be encouraged and not feared.

“Airing out” the Faith, letting it breathe and speak to life, allows it to challenge and guide contemporary culture. Constructing non-essential walls around the Church out of fear, isolating its members from non-existent threats, only serves to harm the Body, placing obstacles to spiritual growth where they need not exist, diverting our focus from the real enemy. The Apostle’s words in his letter to the Ephesians are a continual reminder of where the true danger lies: “we do not wrestle against flesh and blood, but against principalities, against powers, against the rulers of the darkness of this age, against spiritual hosts of wickedness in the heavenly places” (Ephesians 6:12).

For two millennia the Truth has triumphed over falsehood. Christ bestowed the gift of peace and promised that, “the gates of hell shall not prevail” (Matthew 16:18). Individuals may fall and lose sight of the Truth. The Church of Jesus Christ, however, cannot die. As an Orthodox nun once commented: “…even if it is in the heart of one person, the Orthodox Church will always exist.”

Admittedly some of these thoughts may be viewed as simplistic, as perhaps ignoring the great theological controversies of the past, the profound concerns of the Church Fathers as they fought against heresies, as well as the persecutions and strong emotions that accompanied their efforts. Our intention, however, is not to minimize threats, or serious spiritual consequences resulting from error and delusion. We merely wish to distinguish between perceived and actual dangers for the Church, and to emphasize the uniqueness of Orthodoxy among the Christian faiths, a distinction which should give courage to the faithful by instilling within them trust in a living Tradition, guided by the Holy Spirit.

We also wish to discourage, within the Church, paralysis brought on by fear, and to encourage a certain openness that is reflected in Church history, as the Church sought to speak creatively to surrounding cultures, bringing into its life, elements of local culture that were worthy of being blessed and baptized.

St. Paul instructs that “fear” — specifically fear of the “ultimate enemy” — is something from which Jesus came to deliver mankind (Hebrews 2:15). Society at large, as well as religious groups, may be prompted or paralyzed by fear and delusion, or may use these things as tools driving agendas of all sorts. But certainly within the Orthodox Church, its faithful should find courage, be driven by devotion to Truth and motivated by love, perfect love which “casts out all fear” (1 John 4:18).