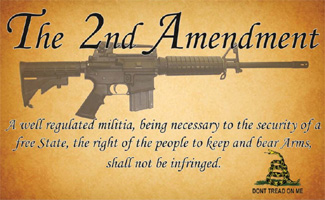 by Mark Almonte –
The two strongest reasons for civilians to own assault weapons are self-defense and defense against tyranny.

One self-defense situation that comes to mind is the L.A. riots. Who can forget the nightly news’s live footage of thugs hurling rocks at passing cars, buildings on fire, and looters smashing storefront windows? Then there was the savage beating of truck driver Reginald Denny.

What was stunningly absent from the video footage? There were no police or fire personnel.

According to the Los Angeles Times, police were ordered to stay out of the area for three hours.  Numerous 911 calls for assault, murder, and fire-bombings went unanswered.  But as the violence raged, one group of citizens refused to be victims — the Korean storeowners.

The Los Angeles Times reported that Richard Rhee had a group on the rooftop of his store armed with shotguns and assault rifles.  They scared off carloads of rioters by firing shots in the air.  Rhee and his group watched a mini-mart a half-block away burn to the ground.  “Jay Rhee … and other employees at a mini-mall at Santa Monica and Vermont … fought a back-and-fourth battle with several hundred looters who surged into the parking lot[.]”

Over fifty people died during the riots.  Twenty-three homicides remain unsolved.  The business owners and the homicide victims relied on the police to respond.  For many, the response never came.  When there’s no law and order — only chaos — that’s when civilians need assault weapons.

The armed Korean storeowners successfully defended themselves because assault rifles are the pre-eminent self-defense weapons.  Assault rifles look and sound intimidating.  When you fire a 9mm handgun, it makes a popping noise.  When you fire an AK-47, it sounds like thunder.  Most assault rifles were designed to be effective up to 400 meters.  Most handguns are accurate only up to about twenty-five yards.  Rifle rounds have twice the velocity and four times the muzzle energy of handgun rounds.  Their accuracy and power make assault rifles very effective against multiple attackers.  In a riot situation, an assault rifle levels the playing field.

A second self-defense situation to consider is defending against a home invasion.  In Cheshire, Connecticut, the suspects in a home invasion raped two of the female victims and then murdered the entire family.  The dad was the only survivor.

In 2011, in Houston, Texas, there was a rash of home invasions by masked teams of attackers armed with guns.  The attacks resulted in three victims being shot to death.

Home invasions, in the public definition, generally involve more than one attacker.  Two facts can’t be ignored: one, assault rifles are the best weapon against multiple attackers, and two, eight minutes is the average police response time for life-threatening calls in medium-size cities.  A lot can happen in eight minutes.

In Harris County, Texas, a fifteen-year-old boy was home alone with his twelve-year-old sister when two burglars broke into the house.  The young boy got his father’s assault rifle and shot one of the burglars.  The boy and his sister were unharmed, and the burglars were apprehended.  Assault rifles can take lives, but as shown in this case, they can also save lives.

There is a less relevant yet nonetheless interesting self-defense reason for owning an assault weapon: defense of country.  One of the reasons that the Nazis did not invade Switzerland was the fact that every Swiss man had a rifle.  According to scholar Stephen Halbrook, “… we have no better record than the Nazi invasion plans, which stated that, because of the Swiss shooting skills, Switzerland would be difficult to conquer and pacify.”  Collectively defending a nation from invasion is the ultimate form of self-defense.  The Swiss have a high gun ownership rate, but the U.S. has the highest in the world.

Our Founding Fathers gave us the most profound justification for civilians owning assault rifles: protection from tyranny.  Many people believe that the United States could never become despotic, but it is not implausible for a democracy to turn tyrannical.  In 1925, Italy went from a parliamentary democracy to a dictatorship under Mussolini.  In 1933, Germany went from a parliamentary democracy to a totalitarian regime under Hitler.  In 1939, Spain went from a republic to a dictatorship under Franco.  As Ronald Reagan once said, “[f]reedom is never more than one generation away from extinction.”

Assault weapons are necessary for defense against tyranny because they are the weapons of the common soldier — just as the flintlock musket was during the Revolutionary War era.  In Federalist #46, one of our Founding Fathers, James Madison, argued for an armed citizenry.  At the time, there was a fear that if the United States had a standing army, it could one day be used against American citizens.  Madison believed that a United States standing army would consist of no more than “twenty-five or thirty thousand men.”  If the citizens were armed, they would consist of a militia of almost “half a million citizens.”  He argued that it was doubtful that a standing army of thirty thousand could conquer a half million armed citizens.  Surely the Founding Fathers didn’t expect the citizens to arm themselves with sticks.  To repel a standing army, the citizens must possess the weapon of the common soldier.  Today, the common soldier’s weapon is an assault rifle.

Critics mock the tyranny argument as silly and outdated, but a new Rasmussen poll shows that 65 percent of Americans believe that the Second Amendment’s purpose is to protect them from tyranny.

Tyranny doesn’t announce itself by wearing a sign.  Tyranny can start as a homeless painter exploiting social frustrations like Hitler or a newspaper journalist promising unity like Mussolini.  The cost of tyranny is high.  It’s your freedom.  Having an assault rifle tells a despot that the cost to take your freedom will also be high.

Civilian-owned assault rifles could defend against rioters or a home invasion, or provide the last barrier in a long list of checks and balances to prevent tyranny.  Assault rifles can mean the difference between life and death, between liberty and tyranny.  In the hands of law-abiding citizens, assault rifles are a symbol of self-reliance.  It’s an American value that has defined this country and made it great.

2 thoughts on “Why do Civilians Need Assault Weapons?”