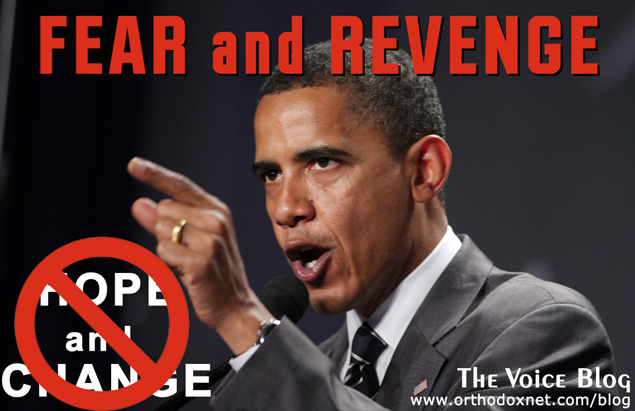 The real character of a man is made manifest in times of crisis. In the final days of this presidential election Barack Hussein Obama is confirming that his vision of America is based mostly on Fear and Revenge!

During a campaign stop at Springfield High School in Ohio on Friday, Nov. 2, 2012, when his Democrat supporters booed the mention of Mitt Romney and the Republican party, Obama encouraged his supporters to:

“No, no, no. Don’t boo. Vote,” Obama told a crowd in Springfield, Ohio. “Voting is the best revenge.”

This is continuing the same class warfare theme full of fear and hysteria the Obama team has promoted throughout this election cycle. Just last week, vice-president Joe Biden said to an audience with hundreds of minorities in attendance that Romney and the Republicans want to put people “back in chains.”

“They’ve said it. Every Republican’s voted for it. Look at what they value and look at their budget and what they’re proposing,” an animated Biden said. “Romney wants to let the—he said in the first 100 days, he’s going to let the big banks once again write their own rules – unchain Wall Street.

They’re going to put y’all back in chains. He’s said he’s going to do nothing about stopping the practice of outsourcing.”

Not to be outdone, Valerie Jarret — often described as “Obama’s Brain”, and the figure whose second story West Wing office has been described by political insiders as the true Oval Office of the Obama White House — is letting it be known that if Barack Obama secures election victory next week, there may be, quite literally, hell to pay for those who opposed him.

“After we win this election, it’s our turn. Payback time. Everyone not with us is against us and they better be ready because we don’t forget. The ones who helped us will be rewarded, the ones who opposed us will get what they deserve.

There is going to be hell to pay. Congress won’t be a problem for us this time. No election to worry about after this is over and we have two judges ready to go.”