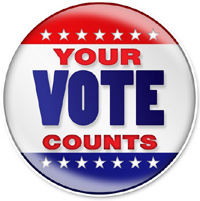 by Fr. Patrick Henry Reardon –
This year’s elections involve an attempt to usurp an authority that belongs properly to God. Vote wisely, therefore, and in the fear of God. This year—more than any time in my memory—our votes in the election are going to be recorded in eternity.

Since political elections normally deal with matters of policy, I do not normally make them the subject of pastoral concern. This year, however, the national elections in our country are not concerned simply with policies but with principles.

My first comment, I suppose, should address that difference.

About policies—most questions of political concern—we may expect some legitimate disagreements among Christians. Among these we should include questions about the application of civil punishments, the funding of public education, the tax code, the authority of federal agencies, this or that social program, and so forth. These matters, properly governed by prudence, leave much room for legitimate disagreements among Christians.

First, the origin of human rights. These, since they come directly from the hand of God, are determined by the moral law. That is to say, no political institution can give citizens a right to do something wrong—not the Constitution, not the Congress, not the Supreme Court.

For example, even though the original Constitution, as well as acts of the Congress and decisions of the Supreme Court, denied full legal equality to Americans held in bondage, no American has ever had a “right” to own slaves. Slavery in our country was always a violation of God-given human rights, and those responsible for that violation have all answered for it at the throne of God.

Second, the unborn child in the womb has an absolute right to be born. This right, which comes from God, is subject to no qualifying circumstances, including the conditions of the child’s conception and the health of the mother. One may not murder an unborn baby. A baby in the womb has the same right to life as its mother and her doctor.

Third, marriage is the union of a man and woman. This principle, rooted in God’s creating act, can be altered by no decision of any institution or agency of government. No one can be given a right to do a wrong. Whatever name is conferred upon it, state-sponsored sodomy is an abomination to the created order. It is a radical offense against the divine Logos.

Inasmuch as these three principles are manifestly at risk in this year’s elections, it is incumbent on all Christian pastors to bring them to the attention of the flock of God.

This year’s elections involve an attempt to usurp an authority that belongs properly to God. Centuries ago, Tertullian warned that political idolatry—the effort to confer on the State an authority that belongs only to God—is the worst and most dangerous sort. Vote wisely, therefore, and in the fear of God. This year—more than any time in my memory—our votes in the election are going to be recorded in eternity.

2 thoughts on “This Year’s Elections and Moral Choices”