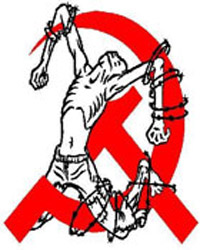 by Bruce Walker –
Those who doubted Obama’s immersion in Marxism now have a perfect window into his soul — namely, in the form of the stunning class warfare remarks he recently made in Roanoke, Virginia.

We must grasp, however, what Marxism is and what it is not.  Marxism is not a political philosophy to help the poor at the expense of the rich, and it is not a design for a utopian future.  Marxism is simply a Heart of Darkness, a Siamese twin of Nazism, a curse on all humanity committed to three themes: (1) hatred, (2) misery, and (3) lying.

Marxism is neither a science nor a system of belief.  It is a rationale for seizing power and terrorizing all those who are not its cadres.  Marxism — English Socialism, or “Ingsoc” — was the secular religion of George Orwell’s Oceania.  In Orwell’s masterpiece, 1984, the interrogator of Winston Smith explains the goals of Ingsoc:


Stefan Possony in 1953 noted: “Kinetic communism often is termed an ‘ideology,’ as if the communist movement were held together by a bond of idealism, with individuals succumbing to communism because of its ideological attraction[.]”  He further explains that “communists are the heirs of the Mongols who conquered, not because they had an attractive ideology, but because they outperformed opponent in the fields of strategy and tactics” (A Century of Conflict, Possony).

Lunacharsky, the first Soviet commissar for education, proclaimed: “We hate Christianity and Christians; even the best of them must be looked upon as our worst enemies.  They preach love of our neighbors and mercy, which is contrary to our principles.  Down with the love of our neighbor; what we want is hatred”  (emphasis added).

Hatred is helped when people are in pain, so creating gratuitous misery is a goal of Marxism.  A key maxim of Marxism is “The worse, the better.”  The Soviets were not bashful about announcing what they wanted: “The misery and oppression of the masses must be intensified to an extraordinary degree” (Sixth Party Congress of the International at Moscow).  Knickbocker, in his 1941 book about totalitarianism in Europe, observed: “Even before the war, in both Germany and Russia, the omnipotent, omnivorous State had devoured all but a vestige of happiness.  As the two regimes of hatred went forward along their respective paths each lost gradually even the desire to promote the happiness of anyone, even of its own people” (Is Tomorrow Hitler’s?, Knickerbocker).

Lenin in 1918 showed that he did not even have a plan for a happy world: “Our party has not written a new program and the old one is worthless.  Socialism has ceased to be a dogma just as it has ceased to be a program” (Proceedings of the Fifth All-Russian Congress of Soviets).  Such hatred naturally led to an embrace of state terrorism against ordinary people, and the Soviets boasted that “[t]error is the basis of Soviet power.  Terror is not an incidental act, nor an accidental expression of government displeasure, however frequently repeated.  Terror is a system of violence, ever ready to punish from above.  It is a system of instilling fear, of compulsion, of mass destruction elevated to the status of law” (Our Chameleon Comrades, Gilbert).

Along with deliberate and almost indiscriminant infliction of pain on mankind, Marxists think almost exclusively in terms of lies.  Orwell’s “doublethink” and “Newspeak” well illustrate this delusion and self-delusion.  Marxists boasted of their mendacity.  Lenin wrote: “The scientific concept, dictatorship, means nothing more nor less than power which directly rests on violence, which is not limited by any laws or restricted by any absolute rules.”  Angela Balabanoff, general secretary of the Third Socialist International, confirmed the dishonesty of Bolsheviks: “The Bolshevik leaders were capable of anything to achieve their political and factional ends” (emphasis in the original) (My Life as a Rebel, Balabannoff).

This, then, is the enemy we face, whose present mask is Obama.  This enemy does not want people to love each other, it does not want mankind happier, and it loathes truth as a mortal enemy.  There is a reason why Marxism has failed everywhere and utterly, and yet some still embrace it wholeheartedly.  The Marxist Heart of Darkness has no noble motives at all.  It is jealous of joy and honor and immune to any argument.  Our only hope is in its defeat.