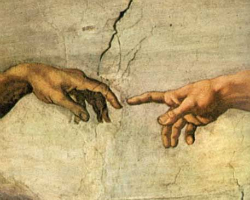 In a comment to a recent article I wrote, the notion that God is necessary for a natural moral law to exist was challenged by reader who identified himself as an atheist. God was unnecessary for morality to exist, he argued. “I am an atheist,” he observed. “I do good for goodness’ sake,” as if Christians don’t.

There is no reason not to take him at his word. If we take him at his word, our atheist reader believes in the first self-evident principle of the natural moral law: do good and avoid evil, which is the same thing as “do good for goodness’ sake.” This is in keeping with St. Thomas Aquinas who says that the first self-evident principle of the natural law is to do and seek the good, and avoid evil. Bonum est faciendum et prosequendum, et malum vitandum. (S.T. IaIIae, q. 94, art. 2) She knew she would do anything – yes anything – even give up her life for the precious one who lay in her arms. A special bond, which had begun nine months before, now burst forth with such fire and fervency that she knew nothing would ever be the same again.

There is, in short, within his knowledge, a moral law which tells him to do good for goodness’ sake. This informs him that he is not to do bad for goodness’ sake, and informs him that he is not to do good for badness’ sake. His law governs both act and intent. And this is quite in keeping with the natural moral law. There is an old maxim: bonum ex integra causa, malum ex quocumque defectu. To be good, an act must be good and be done with good intent. Any defect in the act or in the motive makes the act bad.

Now, my atheist reader acknowledges the natural moral law at its most basic, and he knows it though he does not acknowledge any divine Legislator.

This is, of course, possible. As any good Thomist will tell you, the basic principle of the natural moral law-at its most basic: to do good and avoid evil, or, as my reader put it “do good for goodness’ sake”-is self-evident. On the other hand, the existence of God is not self-evident to us; rather, it is knowledge learned a posteriori, and can be demonstrated from the existence of things.

We can know one without knowing the other because they are known in different ways. The natural law is known because it is writ in our heart. God is known from the things that are made. (Compare Rom. 1:20 with Rom. 2:15). We can acknowledge one without acknowledging the other.

So if my atheist reader is sincere that he believes in a natural moral law which tells him that he ought to “do good for goodness’ sake,” then he already implicitly recognizes, in the order of being if not yet in the order of knowledge, that there must be a God.

It is because the existence of a moral law implies a Lawgiver, a Mind behind the law. There is either Mind behind this law or there is not, and if not, then the moral law is built on arbitrariness, which means it is not law at all.

As the poet Eugene Warren put it in his poem “Christographia XIV”:
Is it chance
or dance moves
the world?
Is the world
blind and dumb
or bloom, festal?
A vain jest,
or holy feast?

The natural law my atheist reader acknowledges-“do good for goodness’ sake”-is the result either of chance, or the result of dance.

It is the result of blind and dumb forces or the result of the “bloom, festal” of design.  It is a “vain jest” or a “holy feast.”  And whether it is on one side or the other depends upon the existence of a Mind, what the Plato and Greek recognized as Nous, which is to say God.

To see why this is so in the order of being, we might refer to an illustration courtesy of Francis Beckwith.  In his book Politics for Christians: Statecraft as Soulcraft, Beckwith explains why “if moral norms have no mind behind them, then there is no justification to obey them.”  There can be no moral law without Mind, without Nous, without God.

Imagine that while playing Scrabble, the letters randomly spell out “Go to Baltimore.”  Is this random event sufficient to compel me to go to Baltimore?  The answer is obviously no.  This seeming “command” is not a command at all.  It is the product of chance, not of dance.  For there to be a command, a law, there must be mind on both sides of the law: the mind of the Legislator and the mind of the subject of the law.  A command, a law-even if it is the fundamental law “do good for goodness’ sake”-if built upon something other than Mind, i.e., God, it is no command at all, no law at all.

In the order of knowledge my atheist reader denies the existence of Mind, of God.  In the order of being it cannot be denied.  I would suggest to him that this law he finds in his heart – “do good for goodness’ sake” – is the hound of heaven, and it beckons him to the Mind beyond it.  With the voice of law, this self-evident principle “do good for goodness’ sake” tells him, in the words of Francis Thompson’s poem “Laus Legis.”

By me what sprung, by me shall die:
Back to God’s stretched hand I fly
To perch there for eternity.

The natural law–“do good for goodness’ sake”–perches in eternity. It is a participation in the Eternal Law, and the Eternal Law is, nothing other than God. For, as the Mirror of the Saxons put it, Gott is selber recht, God himself is Law. In the order of being, there can be no moral law without God.

The existence of God adds an entirely new dimension to the moral law “do good for goodness’ sake.” For the “good” includes the worship of God, and if God is “goodness” itself, the law my atheist reader acknowledges exists compels him, if he but look to the order of being, to worship God for God’s sake.

And one more thing. If “do good for goodness’ sake” is a law, what is an atheist to do in the event of its breach? How is the evil to be dealt with? How is conscience to be assuaged? To whom shall sacrifice be made? The need for forgiveness, for conscience to be assuaged, for wrong to be righted is itself is another call to the Mind behind the law breached, and this a call for forgiveness.

As J. Budziszewski put it in his excellent book on the natural law, What We Can’t Not Know:

“It may seem that the possibility of forgiveness matters only on the assumption that there is, in fact, a God–that without the lawgiver, there would be no law, and therefore nothing to be forgiven. The actual state of affairs is more dreadful, for the Furies of conscience do not wait upon our assumptions. One who acknowledges the Furies but denies the God who appointed them–who supposes that there can be a law without a lawgiver–must suppose that forgiveness is both necessary and impossible. That which is not personal cannot forgive; morality ‘by itself’ has a heart of rock. And so although grace would be unthinkable [via Reason], the ache for it would keen on, like a cry in a deserted street.”

But the cry is not a cry on a deserted street. Our cry is returned by another cry. This one from the Cross. “Father, forgive them!” (Luke 23:34)