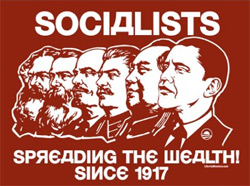 by Bruce Walker –
The Left, grounded in the childish superstitions of Marx, views life as economics. One awful flowering of this dangerous silliness is the proliferation of victims. The resource-rich nations of long decolonized Africa and Asia, for example, remain poor because of imperialist exploitation by America and Europe. Women and racial minorities are still, officially, “exploited,” although how that can be taken seriously forty years after the Women’s Liberation Movement and fifty years after centerpiece Civil Rights legislation is never really considered. The Left needs victims and victimizers and the easiest way to invent these clumps of humanity is dreary socialism and its dull-normal offspring, like feminism.

Most of all, the Left needs all things to be, at their core, economic. Although many Americans and many Europeans face daunting problems finding work and paying bills, this is less the result of true economic problems and more the consequence of the awareness by Leftists that the full flowering of prosperity would end the need for their noxious hatreds and coveting.

One dread of the Left, of course, is that with the natural affluence which is within the easy reach of all free societies today, the Left cannot divide us into embittered, mistrustful groups

We have long since passed the point in which a sensible use of technology in a free market can produce all the affluence that is good for us. In one sense, we suffer from too much “stuff.” Politically-correct billboards which plaintively ask us to end childhood hunger in America compete with politically-correct television spots urging parents to ensure that their obese children exercise much more each day. Most of us do not feel affluent, much less rich, but much of that is because the Left insists that any surplus of wealth created most be gobbled up by needed “social” programs and strictures — and this is at the heart of the Global Warming Myth: the monumental destruction of human wealth which the worship of this false religion demands will prevent us from ever reaching that happy point in human progress most feared by the Left: the Post-Economic Age.

One dread of the Left, of course, is that with the natural affluence which is within the easy reach of all free societies today, the Left cannot divide us into embittered, mistrustful groups who can find common dreams only in the unified hatred of doctrinal oppressors — tobacco companies, heterosexuals, men, oil executives, clergy, and so forth. If we can be stripped of our individuality and channeled into tight corrals or race, religion and gender, then the Left can use us to keep them in power. This, of course, is the reason why nice women like Sarah Palin and Michele Bachmann or noble black men like Herman Cain or Allen West are so viciously loathed by the Left: they are “uppity” and fail to follow the rules.

Modern life is filled with nothing, much, but ways to while away life until we reach the grave.

There is another deeper dread of the Left, though: we may realize that all poverty is invented by governments hostile to human progress and that we ought to be pursuing true fulfilling lives. That is also why the Left wars so hard against all aspects of true art. Consider, as one example, the proliferation of remakes of films and television programs, all pruned of true creative power and marinated instead in the numbing orthodoxy of the Left. Almost every variety of art today is sick or dying. Compare, for example, the sparkling originality of the old Twilight Zone with the predictable and boring remake of the series a couple of decades ago. Modern life is filled with nothing, much, but ways to while away life until we reach the grave. (Is it not appalling how many of our consumer goods are related, almost entirely, to recreation?) We imagine that without television, without the Internet, without magic phones that life would be unbearable. he Left plays on that fear, which rises from the ashes of an increasingly atheistic West and haunts the lives of those who see no meaning to anything.

In our Post-Economic Age, when for the first time everyone on Earth can have enough food, a decent shelter, and opportunities for self-expression — if only Leftist politics would leave us alone — the Left must convince us that our lives revolve wholly around 19th Century economics. So, “collective bargaining,” the outworn theory that capitalists — who, increasingly, are taxpayers — mercilessly exploit workers, is still discussed by Leftists as if it was a transcendent truth of life.

Those who craved power like junkies crave heroin would be seen as pals of Hitler and Stalin, pathetic creatures from whom all sharp tools should be kept.

What would happen if the Left simply allowed the pent up prosperity of free people to explode for a decade or so, and people in our very high tech society saw that not only can money not buy everything, but even the miracles of technology really meant very little in meeting the goals of a purposeful life? There would be no one to bribe away from liberty, because we all would have seen how little the bribes bought. Those who wanted vaster mansions to have rooms that they would never see would been understood as modern equivalents of King Midas, whose own daughter he turned to gold. Those who craved power like junkies crave heroin would be seen as pals of Hitler and Stalin, pathetic creatures from whom all sharp tools should be kept.

Those of us who saw life as a divinely created adventure on a planet filled with beauty to savor, people to love, art to make, and prayers to offer would devote our lives to what mattered.

Those of us who saw life as a divinely created adventure on a planet filled with beauty to savor, people to love, art to make, and prayers to offer would devote our lives to what mattered. Once men tamed wild beasts but today we think of lion attacks only in storybooks. Once men dreaded smallpox and polio, but today a quick injection makes us safe. Standing on the shoulders of giants before us, we need not have to worry about “stuff,” except when government comes in with a thief’s purse and a wrecking ball to despoil and devour wealth. We all still have to work, but honestly the amount of productive work we each need to do to make us comfortable is modest. Once conservatives realize, and convince, our countrymen that our liberty counts much more than our stuff, then we will have won the war.