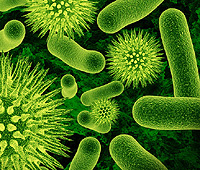 by Brian Thomas, M.S. –
Living forms supposedly evolved by adapting to environmental challenges. It is generally assumed that they did this by gradually acquiring the needed genetic mutations until brand new features arose and whole creatures eventually morphed into totally different ones. But does real science support this story?

Experiments with bacteria continue to show that although adaptations do occur, they are bound by hard limits to how much change can take place.1 And these limits also circumscribe evolution’s potential.

Two separate studies in the June 3, 2011, issue of Science arrived at the same conclusion. One tested the effects of multiple mutations on the “fitness” of mutant versions of a methanol-eating bacteria called Methylobacterium.2 Researchers measured the relative fitness of a mutant by directly comparing its growth rate with non-mutants in the limited resource environment to which the mutants had adapted.

When placed in a challenging environment, bacteria at first rapidly adapt their chemistry by generating “mutations” that can help them adjust to their new surroundings. But over time, fewer adaptive changes occur. The second study showed the effects of multiple mutations on the fitness of the common gut bacteria Escherichia coli.3 The results indicated that each additional mutation was less helpful for the creature’s attempts to adapt.

These researchers may even have discovered why the pace of adaptations decelerates over time. The technical paper for the Methylobacterium study, steered by senior author and Harvard evolutionary biologist Christopher Marx, stated, “Proportional reductions of a cost became successively less beneficial as the cost itself was alleviated.”2

So, the changes in bacterial DNA came with a cost. The mutant bacteria had to spend extra cellular energy to regulate protein production. As the bacteria gained control of the pace of protein production, fewer adaptations were generated.

But if adaptation rates slow over time, then why didn’t the process of generating adaptations grind to a halt long ago? In order for big-picture evolution to work, adaptation rates should at least be constant, if not increasing, instead of decreasing. In other words, adaptations are going the wrong direction.

This principle of diminishing returns with genetic modifications limits the potential for change. Those committed to the Darwinian paradigm of unlimited biological change do not generally refer to any “limitations” such as this. But the Methylobacterium authors, to their credit, stated that these “trends in genetic interactions…affect both the speed of adaptation and the degree to which possible trajectories are limited.”2

And the observed limits on adaptations also limit the “possible trajectories” of change to those that occur strictly within a created kind, according to observations. After all, both the bacteria and the yeast remained the same species, even after thousands of generations. And their incredible abilities, limited though they may be, to alter their own genetic code in order to adapt to new environments are certainly the products of purposeful creation.