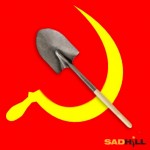 by Jonah Goldberg –
“Shovel-ready was not as … uh … shovel-ready as we expected,” Barack Obama joked the other day at a meeting of his Council on Jobs and Competitiveness.

Republicans jumped on Obama’s comment as insensitive. “He joked about the wildly mistaken predictions he and others at the White House made a couple of years back about the job-creating potential of the stimulus,” said Senate Minority Leader Mitch McConnell. “Well, I don’t think the 14 million Americans who are looking for jobs right now find any of this very funny.”

I’m sure they don’t, but the fact that the president laid an egg when he tried to be self-deprecating isn’t the scandal here.

After all, Obama has pretty much said the same thing several times. In a New York Times magazine profile last October, the president admitted he had to learn the hard way that there’s “no such thing as shovel-ready projects.”

This is a staggering indictment of the president, the team he assembled and the journalists who accepted this administration’s arrogant assertions that they knew exactly what to do, how to do it, and what would happen as a result. Remember, this is the administration that to this day insists it is “pragmatic” and simply cares about “what works.”

“I think we can get a lot of work done fast,” President-elect Obama said shortly after gathering of governors in December 2008 “All of them have projects that are shovel-ready, that are going to require us to get the money out the door.”

Jared Bernstein, the economic advisor to Vice President Joe Biden — the White House’s point man on the stimulus — said in a cable news interview in February 2009: “I think what people need to understand is that this really isn’t rocket science.” Spend a bundle on public works projects and — boom — you get a lot of people working.

They were wrong not just about the effect of infrastructure spending — even an analysis by the Associated Press found no evidence unemployment was significantly improved by the Recovery Act’s public works projects — but they were wrong about the existence of shovel-ready jobs in the first place. (They were also misleading, since only a tiny, tiny fraction of the stimulus went to any infrastructure at all. The bulk went to social programs.)

Back in October, when Obama admitted that he had to learn on the job that shovel-ready jobs don’t exist, then-Democratic Pennsylvania Gov. Ed Rendell — a leader in the push for the stimulus — told the New York Times it was all a terrible misunderstanding. “When we said ‘shovel ready’ we meant ‘shovel ready’ in the way we do things.” He added, “I don’t think we meant to be deceptive.”

You’ve got to love the “I don’t think” there.

The “way we do things” involves endless paperwork, union regulations, environmental red tape and the like. That’s why it only took 410 days to build the Empire State building and 16 months to build the Pentagon but nearly 20 years to complete Boston’s Big Dig. Lord knows how long it will be for the government to finish work on Ground Zero.

The point is that the president and his team came into office insisting that they were on top of things and above mere ideological considerations. When confronted with skepticism about the existence of “shovel-ready” projects, they in effect rolled their eyes and scoffed at the backseat drivers.

Perhaps that’s why Obama’s real economic agenda never changed to fit the economic crisis. During the campaign he promised to reform health care and fight for a green economy. After the financial crisis, the “pragmatist” stuck to his outdated agenda, saying — surprise! — what the economy needs is the same agenda he promised before. So while he kept saying he was obsessed with job creation, he spent all of his political capital on health care reform and energy. All the while, the White House tries to spin its agenda as something it’s not.

For instance, you know where this jobs council meeting took place? At Cree Inc., an LED light bulb maker. Under the supposedly jobs-boosting stimulus, Cree received $5.2 million. According to Recovery.gov, that $5.2 million created 3.02 jobs. That’s $1,716,171 per job.

There’s a funny joke in there somewhere, but I don’t think Obama wants to tell it.