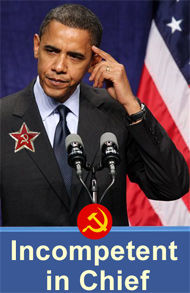 by Monty Pelerin –
The number of Obama supporters seems inversely related to his time in office. Many wonder what happened to “The One We Are Waiting For.”

Obama assumed office in difficult economic times. After a couple of years of excuses — which included “the problems were worse than we knew” and the generic, all-purpose “it’s Bush’s fault” — Obama now owns the original problems and new ones of his own doing. An incomplete report card on his “accomplishments” would include the following:

There are a plethora of other problems that could be attributed to Obama. In short, it is difficult to ascertain what, if anything, has improved other than the demise of Osama bin Laden.

Two hypotheses are often cited to explain why things have gotten so much worse:

Obama is an ideologue, narrowly (and poorly) educated. As a result, he is ignorant in the ways of the world.

These hypotheses are not mutually exclusive. Evidence is consistent with either or a combination of both. The remainder of this article deals only with the first. Readers should not assume that the second is unimportant, inoperable, or impossible.

Dr. Thomas Sowell wrote about “seductive beliefs” in a two-part article (second part here). He touched on some of the incorrect beliefs guiding President Obama. In short, Obama is an ideologue, narrowly (and poorly) educated. As a result, he is ignorant in the ways of the world.

Economics versus Morality
Sowell’s analysis provides perspective on Obama’s behavior. Obama has virtually no understanding of basic economics. Exploitation ideology is the basis for his world- and economic view. This ideology sees the world as a zero-sum game. In essence a fixed pie is divided. If one person gets more, others necessarily get less.

Freedom, markets, institutions, incentives, and voluntary trade have no place in Obama’s world.

A country becomes successful by taking advantage of other countries. This naive view, based on the long-discredited concept of mercantilism, sees success as exploitation. Freedom, markets, institutions, incentives, and voluntary trade have no place in Obama’s world. Success or failure is determined by one variable — whether you are the exploiter or the exploited.

Exploitation theory does not comport with economic theory, history, or reality. As Sowell points out:

It is hard to reconcile “exploitation” theories with the facts. While there have been conquered peoples made poorer by their conquerors, especially by Spanish conquerors in the Western Hemisphere, in general most poor countries were poor for reasons that existed before the conquerors arrived. Some Third World countries are poorer today than they were when they were ruled by Western countries, generations ago.

Obama’s ideology blinds him to relevant variables. Incentives, institutional frameworks, profit and loss, individual initiative, saving and investment, hard work, etc. have no role in his simplistic world. He is a political creation with no experience in relevant matters. He does not understand markets, business, meeting a payroll, or managing an organization. This vacuum in knowledge produces failed economic results because policies do not consider the relevant variables for economic success.

Obama does not understand markets, business, meeting a payroll, or managing an organization.

In Obama’s world, success and failure are moral rather than economic outcomes. Success is a marker for evil. Failure is due to someone else’s success rather than personal shortcomings. Failure represents passivity, the choice to not exploit others. Proper moral behavior produces failure.

For Obama, economics itself is inconsistent with morality. Hence economics itself must be evil. This view of the world is both simple and ignorant. No, it is beyond that. It is a sign of stupidity! Recognition of this stupidity is the key to understanding Obama’s behavior and policies.

An Interpretation of Some Obama Policies
The key to understanding much of Obama’s behavior is the notion that economics itself is necessarily evil and must be constrained or even remedied.

Successful allies (think Israel and Great Britain among others) are morally inferior to unsuccessful, backward nations who only are so as a result of exploitation. Third-world nations require restitution for the evils imposed by successful nations. That some of these are enemies of the US makes them even more deserving. The US, heretofore the greatest success, therefore represents the greatest evil. Obama’s world-apology tours and treatment of allies can be understood in light of such convoluted beliefs.

Moral judgments also drive domestic policy. Individual success is simply a microcosm of national success. It too is achieved by exploiting others. That explains Obama’s “Joe the Plumber” moment. If the pie is fixed in size, the rich make others poor. That is the fallacy underlying Obama’s belief that people are entitled to only so much income or wealth.

In his mind, he has a right, probably a moral obligation, to confiscate and redistribute wealth. The rich and successful must be punished at some level of success. Their success causes the poor their pain.

Talent, hard work, ingenuity, risk-taking, etc. are not relevant in Obama’s third-grade level of economic understanding. As expressed by Tom Sowell, “[w]hether at home or abroad, Obama’s ideology is an ideology of envy, resentment and payback.”

Obama’s faults are neither charming nor harmless. He is in a position of extreme power, capable of doing massive damage.

The Bigger Problem
Obama is doing what he believes right and just. Sophomoric understanding, however, does not explain why the inequities of the world are assumed to be Obama’s responsibility. How does one go from President of the US to a modern-day Don Quixote for the entire world?

Some psychologists and psychiatrists have answered this question in terms of Obama’s ego and pathological narcissism. The psychological conditions that motivate a person are less clear than the ensuing actions. They also can be much more frightening. To understand a person, it is sometimes necessary to speculate on such motivations.

Obama’s narcissistic disorder apparently enables him to see himself as the President of The World, the Great Rectifier and the One We Have Been Waiting For. Some supporters speak of Obama in messianic terms, as he himself has arrogantly done. This behavior pattern could be indicative of severe delusion, even megalomania.

The original Don Quixote’s tilting at windmills was charming and harmless. This knight of old was noble and honorable. He possessed character and integrity. While a bit crazed, his motives were pure. It was difficult not to admire him.

None of that holds true for President Quixote. The only thing these two delusional people have in common is a fascination with windmills. The old knight imagined them as dragons to be slain, the modern one as solutions to the world’s problems. Which belief is more rational is left to the reader to decide.

Obama’s faults are neither charming nor harmless. He is in a position of extreme power, capable of doing massive damage. His quixotic behavior squanders this nation’s resources and destroys its economy. Obama, like his predecessor of old, intends to solve all the injustices of the world. His Quest is to compensate for the sins of the successful.

The downtrodden are his protectorate, just as they were the delusional knight of old. The modern Quixote, however, exploits them for political gain rather than true concern. The successful, fewer in number, are targets unless they can assist him in his goals.

The claim that Obama is the smartest man to ever hold presidential office is absurd and a reflection on the state of our media who insist on propping up this man-child.

Obama’s “Superior” Intellect
How dangerous this delusional man might be is moot. What seems no longer at issue is Obama’s “superior intelligence.” Obama’s belief system is dominated by the dismissed exploitation theories of Karl Marx and the 60’s-style radicals he grew up around. The Reverend Wright preached to him for twenty years about exploitation in terms of Black Liberation Theology. An unrepentant terrorist, Bill Ayers, was a close friend and arguably author of one of Obama’s autobiographies. His personally selected “Czars” are the sorriest collection of Presidential advisors ever, at least in terms of reflecting American values and beliefs.

Many went on the same intellectual voyage that Obama did. Most of us outgrew this nonsense, usually by our mid-twenties. Obama never did. He is still a child, intellectually undeveloped and locked into the ideas from the 60’s — both the 1960s and the Marxist 1860s. In that sense he is an intellectual dwarf, frozen in the equivalent of a state of intellectual puberty. His “knowledge” is based on nothing but the discredited ideologies of Socialism.

The claim that Obama is the smartest man to ever hold presidential office is absurd and a reflection on the state of our media who insist on propping up this man-child. Obama’s obsession with keeping his college records and personal past secret is prima facie evidence that the claim is untrue. His knowledge base and dismal performance on the world stage is even more damning.

Instead of having a superior intellect, we likely have the most ignorant, ideological, brainwashed dupe this country has ever elected to high office. The man’s intellectual development never progressed beyond the stage of all-night freshman bull sessions where all the world’s problems were solved (with help from adequate amounts of beer of course).

This intellectual pygmy must be removed from office by whatever possible peaceful means. Impeachment is in order, but will not happen. Thus the 2012 election is critical.

Democracy is a form of worship. It is the worship of jackals by jackasses.

The Democratic Party knows what happened in 2010. They also know that they have an albatross at the top of their ticket. It is likely they will turn on this poseur before the election. If so, this act will be their most significant public service in years.

Obama will not be reelected, but that may not be enough. A country filled with enough fools to elect this modern-day version of a snake oil salesman, this American Idol wannabe, this empty suit, is clearly dumb enough to replace him in kind. H. L. Mencken had it correct: “Democracy is a form of worship. It is the worship of jackals by jackasses.”

The Democratic Party is and should be worried about 2012. No Democrat, save the hapless Jimmy Carter, can be happy about their current situation. Carter is the exception because his lock on “worst President ever” is about to be broken by the current occupant.