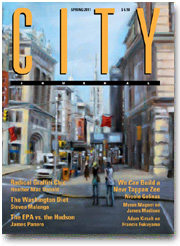 Apostate David Mamet confronts the secular religion of liberalism.
“I had my first conversation with a conservative at the age of 60.” On the face of it, that claim seems absurd: David Mamet must have dwelt in a hermetically sealed environment for six decades. But the playwright/director is telling the truth; he’s spent his career in show business, an ecosystem as airtight as academia.

Unlike so many of his colleagues, however, Mamet began to question the shibboleths and doctrines he had long taken for granted. In four years, the 64-year-old moved inexorably from left to right, like the hour hand on a clock. In The Secret Knowledge, his latest collection of essays, he confesses that “I examined my Liberalism, and found it like an addiction to roulette. Here, though the odds are plain, and the certainty of loss apparent to anyone with a knowledge of arithmetic, the addict, failing time and time again, is convinced he yet is graced with the power to contravene natural laws.” But there was a profound difference; the gambler hurts primarily himself. “The great wickedness of Liberalism, I saw, was that those who devise the ever new State Utopias, whether crooks or fools, set out to bankrupt and restrict not themselves, but others.”

Liberalism is a secular religion. Its dogmas cannot be proved, its capacity for waste and destruction demonstrated.

These are strong words, and Mamet is just warming up. The renegade defines liberalism as a secular religion. Its dogmas “cannot be proved, its capacity for waste and destruction demonstrated. But it affords a feeling of spiritual rectitude at little or no cost. Central to this religion is the assertion that evil does not exist, all conflict being attributed to a lack of understanding between the opposed.” Liberalism’s tenets include a number of familiar and fatuous bromides. Among them: college courses in Western Civilization push the products of irrelevant dead white males. The Third World is composed of victims, the First World of their victimizers. Free-market capitalism is carnivorous; European socialism offers a peaceful solution to the world’s economic problems. The U.S. private sector is characterized by unbridled greed, whereas the federal and state governments are driven by the wish to bring universal prosperity. If only Israel would relinquish a few miles of turf, peace would reign in the Middle East.

Mamet is first and foremost a dramatist; subtlety is not his long suit. Though he frequently quotes intellectual conservatives like Friedrich Hayek and Milton Friedman, his most telling points are short autobiographical statements about liberal smugness and conservative rectitude. The author was born and raised in Chicago, the son of immigrant parents who fled Eastern Europe a few years before the Third Reich took over. Disturbed by racism in the City of Broad Shoulders, they joined the NAACP. “Did they do it because they felt ‘guilty?’ The suggestion would have been greeted as psychotic. They supported the NAACP out of a sense of tzedakah, which is to say ‘righteousness.’ Was their response insufficient, or misplaced? No doubt. But it was not risible. And the South Shore Country club, eight blocks from my house, and Restricted, allowing No Jews, was eventually bought by Elijah Muhammad, restricting all whites, and life goes on.”

“But I believe I benefited from the absence of sanctimony.”

Chicago is also the background for his criticism of President Obama. “I hold no brief against someone who is not interested in sports, but I could never trust someone who claimed such an interest, in order to advance his own agenda.” Barack Obama, in a radio interview, was asked if he, as a Chicagoan, preferred the White Sox or the Cubs. “He claimed he was a Sox fan, twice mispronounced the name of Comiskey Park, twice referred to the umpire as ‘the judge,’ and, asked for his favorite White Sox, past or present, could not come up with one name. Sigh.”

Throughout the book, Mamet displays two key assets. The first is his courage in going against the political orthodoxies of his time and trade. The second is an ability to deflate the Left’s True Believers by underlining their ovine behavior and their essential hypocrisy. “This is the state of the contemporary Liberal world,” he writes. The fear of giving offense has been self-inculcated in a group that “must now consider literally every word and action. Consider a high school teacher coming upon two students kissing in the hallway, in violation of school rules. Suppose the two students are gay. Can you imagine a teacher who would not at the very least hesitate in or mitigate her caution or censure in fear of offending the students?”

As for liberal plaints about the injustices of the Jewish State, he proposes a simple test. At the beginning of a war, an American plane is forced to land at a foreign airport. Two aircraft are available to the travelers and their families. One is headed for Syria, one to Israel.

“No one reading this book,” Mamet confidently states, “would get on the plane to Syria. Why? It is a despotism, opposed to the West, to women, to gays, to Jews, to free speech. It is a heinous Arab version of National Socialism, dedicated to the murder of every person in Israel. And yet one may gain status or a feeling of solidarity by embracing the ‘Arab cause.’

“But we embrace it only as entertainment. In the free market, which is to say, when something is at stake, we will vote otherwise.”

Years ago Mamet wrote a line of dialogue with an autobiographical echo: “I grew up in a tough neighborhood and we used to say you can get further with a kind word and a gun than just a kind word.” The weapon in this case is anger—at himself for waking up so late in life, and at others for clinging to an outworn creed. The Secret Knowledge is unlikely to change many minds in his generation, but there are a lot of youthful Mamet fans out there, and his precepts and examples are just the sort to attract a fresh audience. No wonder liberals feel so threatened.