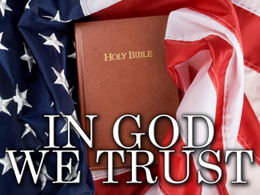 by William Sullivan –
It is beyond dispute that there is a link between socialism and American progressivism. Both flawed ideologies are predicated upon the soundness of a large and powerful government designed to disperse the fruits of labor by seizing means and property from the productive. And as many conservatives are quick to point out, nothing could be more antithetical to the ideals scribed in the Constitution

But beyond the insidious application of socialism under the less condemning titles of “progressivism” and “social justice,” the liberal left poses another threat to America that is less defended. It has, for over a century, laid perpetual siege upon Christianity, seeking to excise all Christian influence from American government and its institutions piecemeal, from banning prayer in schools to seeking taxpayer-funded abortions.

America, since inception, has been closely aligned with God. God is referenced on our buildings, our currency, and is invoked to preside over our justice system.

This phasing-out of Christianity’s influence in American government has been applauded by secular liberals. They are convinced that God has no place in American governance, steadfastly clinging to the false belief that the First Amendment implies this mandatory “separation.”

Our leader, too, works feverishly to sever the relationship between God and America, and to downplay the latter’s reliance on the former. Consider that Barack Obama has gone out of his way on numerous occasions to describe that “we are no longer a Christian nation.” Or consider that he has wished goodwill to Muslims around the world on the uniquely Islamic holidays of Ramadan, Eid-ul-Fitr, Hajj, and Eid-ul-Adha, but failed this past weekend to offer the same courtesy to American Christians to commemorate the death and resurrection of Jesus Christ.

The fact that America has a president that is working hard to separate Christianity from the American identity is certainly disheartening. But what is really terrifying is the looming outcome if he succeeds.

The fact that America has a president that is working hard to separate Christianity from the American identity is certainly disheartening.

Eugene D. Genovese, as referenced by Dr. Thomas Woods in his book A Politically Incorrect Guide to American History, was an open Marxist for most of his life. Toward the end of his life, he denounced Communism, and in 1994, revealed what he found to be the true source of socialism’s evil.

The “horrors” of socialism, according to Genovese, were not the result of “Stalinist or other corruptions of high ideals.” Rather, they were caused by “a deep flaw in our understanding of human nature — its frailty and its possibilities — and by our inability to replace the moral and ethical baseline provided by the religion we have dismissed with indifference, not to say contempt.” And, even more specifically, he relates, “Having… scoffed at the Ten Commandments and the Sermon on the Temple Mount, we ended a seventy-year experiment with socialism with little more to our credit than tens of millions of corpses.”

His meaning is simple. The gravest dangers of socialism are only realized when a people take their faith from God and place it in frail humans, who, by nature, are capable of unspeakable atrocities. It was not because Communists believed in socialism that led to their unquestionable evil; it was the forceful extraction of God from the people’s ideology.

The gravest dangers of socialism are only realized when a people take their faith from God and place it in frail humans, who, by nature, are capable of unspeakable atrocities.

So we should be afraid, not because we have cobbled a path to socialism for over one hundred years, but because that time has been simultaneously spent directing America away from the Christian God of its founding.

The fact that the progressive movement has been bent on shepherding its flock away from God has yielded frightening trends. Today, the apostolic devotion reserved by our founding fathers for God has become replaced in many American liberals by devotion to large government and Barack Obama. There are so many among them that unconditionally support him; African-Americans who support him for his race alone, leftists that support him for being something other than Republican, and even anti-war elements that support him in spite of escalating the war in Afghanistan and attacking Libya.

In truth, we have had a saving grace that has made us less susceptible to experience the evils socialism can bring. America, since inception, has been closely aligned with God. God is referenced on our buildings, our currency, and is invoked to preside over our justice system. In terms of America’s character, as well, there is evidence that proves Christianity’s influence. For example, I’ve heard it said by Christians that atheists lack a moral compass, but with the many atheists I’ve known, this is wholly untrue. The truth is that American atheists absolutely have a moral compass, and it comes from God; they simply choose not to recognize the correlation. The tenets of Christianity have shaped American morality, and therefore, this moral compass has been engrained in most of them through the American experience.

The tenets of Christianity have shaped American morality, and therefore, this moral compass has been engrained in most of them through the American experience.

Because what is American and what is Christian are often the same, disassociating the two takes considerable effort. But after one hundred years of a calculated progressive assault, there is a gradual and increasing severance.

Our founding fathers knew the danger Eugene Genovese would discover 200 years later. They clearly did not believe in the constancy of men that become tyrants, but it certain that they believed in the constancy of God that grants us reason. It was with this in mind when, in a moment of brilliance and clarity, they forged the greatest and freest nation this Earth has ever seen.

They have entrusted it to us, and we have a duty to protect this country’s relationship with God. If we fail, it will cease being the country we have known and- with the exception of some champions of progressivism- loved.