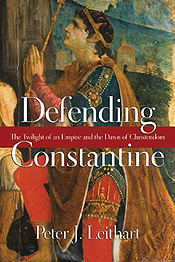 by Mark Tooley
The destruction of Osama bin Laden underlines how many U.S. church voices, even since 9/11, have adamently insisted that Christianity demands pacifism.

Much of the Evangelical Left, so influential on Christian college campuses and increasingly prominent in Washington, D.C., relies on neo-Anabaptist beliefs. Sojourners activist Jim Wallis, who last week launched a crusade against “cuts” in the 2012 federal budget, adheres partly to this tradition. These neo-Anabaptists demand total pacifism and reject the military. Unlike traditional Anabaptists, they are not separatists, and many exuberantly advocate Big Government control over medical care, food, energy, and virtually all of life. The godfather of sorts for these disjointed neo-Anabaptists was the late Mennonite theologian and Notre Dame professor John Howard Yoder. He joined most Anabaptists in assuming that Christianity was massively corrupted by 4th century Roman Emperor Constantine’s embrace of Christianity. The resulting Christendom created over 1,600 years of wars and oppression ostensibly in the name of Christ.

Constantine famously professed Christianity after winning a military battle before which a cross had appeared to him in the sky. His conversion largely ended Rome’s persecution of Christians and facilitated Christianity’s eventually becoming the majority faith for the West. Constantine is often derided as a brute who usurped the church to enhance his own rule over the empire. His critics note that that he governed and waged war bloodily like all such emperors, and that he purportedly executed his wife and son. The more extreme conspiracists, echoing the Da Vinci Code’s fiction, accuse Constantine of imposing theological orthodoxy, even Christ’s divinity, upon an obedient Council of Nicaea. Anabaptists typically fault him for turning previously pacifist Christians into willing soldiers for Rome and all subsequent empires. The neo-Anabaptists are most distressed by Christians who support today’s American “empire.”

In response, Presbyterian theologian Peter Leithart has penned a very important book, Defending Constantine: The Twilight of an Empire and the Dawn of Christendom. He not only competently restores Constantine’s reputation but also thoughtfully and polemically rebuts the Anabaptists, specifically including John Howard Yoder. A senior fellow at new Saint Andrew College in wonderfully named Moscow, Idaho, Leithart argues that Constantine’s conversion was sincere, that his legalization of Christianity was a tremendous relief to the persecuted church, that his Christian inspired legal reforms ameliorated some of Rome’s pagan savagery, that he respected the church’s autonomy, and that he desacralized the empire and began the end of all civic pagan burnt offerings once so universal. Leithart also persuasively disputes that the early church was decisively pacifist. Despite Anabaptist claims, especially by Yoder, there simply is not sufficient evidence to show the early church had ratified a teaching on military force. Leithart points to the usual New Testament examples of Jesus and His apostles not objecting to force by civil authorities. He also describes the pagan sacrifices once required within the Roman military, probably enhanced in reaction to Christianity’s growth, and which prohibited service by Christians who otherwise did not object to legitimate force. Constantine’s abolition of state-imposed pagan sacrifices removed this barrier for Christian military service.

Leithart’s book is not an unqualified ode to Constantine. He admits that much of Roman law remained brutal, and Constantine was sincere in faith though still inexact in theology and often savagely politically ambitious, like any successful emperor. Constantine was hardly the “thirteenth apostle,” as some eastern Christians later portrayed him in their icons. And his main contemporary biographer and apologist, Eusebius, was not flawless, though neither was he merely a propagandist. Leithart thinks Christians of the time were understandably grateful and fulsome in praise for their patron and emperor, who delivered them from centuries of routine persecution and martyrdoms. Leithart also suggests that the ostensible execution of Constantine’s wife and son, reputedly in punishment for a tryst between the son and his step-mother, may in fact have been self-induced. The son supposedly died by poisoning, while the wife ostensibly was boiled to death in her bath, possibly, Leithart proposes, while trying to induce an abortion. Even if they were executed, incestuous and treasonous adultery would have demanded the penalty by standards of that day.

Constantine created a new system of sort of religious liberty, in which pagans continued to worship their deities, but without state patronage. The emperor often cited God vaguely enough to incorporate Christians and pagans, creating a new form of civil religion, even while he himself lavished personal patronage on the church and granted bishops some juridical authority. This new civil arrangement, Leithart argues, created a relatively coherent form of mostly harmonious civil arrangement corrupted by later emperors who more assertively suppressed paganism. Still, he credits Constantine for ending nearly once and for all the system of ritual sacrifices so central to virtually every society. The suppression of sacrifices has thankfully persisted to this day, Leithart notes. But he qualifies his thanks by noting that the modern era’s nihilism, embodied in genocidal totalitarianism, arguably opened a new form of terrible state-imposed sacrifice.

Leithart is respectful of Yoder while amply illustrating that much of Yoder’s version of history was superficial when not completely false. Even Yoder’s main disciple, Stanley Hauerwas of Duke University, favorably reviewed Defending Constantine for Christian Century. “Leithart’s fundamental criticism of Yoder is that he betrayed his own best insights when he denied the possibility that by God’s grace emperors (or whoever is the functional equivalent, such as “the people”) might receive a vision sufficient to make them Christian,” Hauerwas wrote. “That is a point that I think Yoder would find worth considering.”

That God can use armed rulers to achieve His purposes is hardly a profound discovery about omnipotent Divine Providence. But it’s still an assertion that befuddles many of Yoder’s followers. Oddly, many neo-Anabaptists of today’s Evangelical Left, Jim Wallis above all, vigorously assert that the coercive, modern welfare and regulatory state are God’s chief instruments for His justice. Leithart does not directly address their claims, and somebody else will have to write that book. But Defending Constantine more than adequately explains that a Roman Emperor’s conversion, even amid the squalor and brutality that characterized that age and every age, did overall bolster the church and humanity with it.