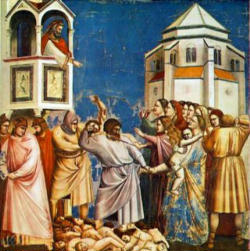 On December 28 in the Octave of Christmas we commemorate the Feast of the Holy Innocents in the Catholic Church. The readings for the Mass remind us that evil has no respect for life. There is an ongoing struggle between life and death, darkness and light, and those of us called to continue the redemptive mission of Jesus, the Light of the world, are engaged in the conflict.

The first reading for the Mass of the Feast of the Holy Innocents is taken from the 1st letter of the beloved disciple John, ‘This is the message that we have heard from Jesus Christ and proclaim to you: God is light, and in him there is no darkness at all. If we say, “We have fellowship with him,” while we continue to walk in darkness, we lie and do not act in truth.” (I John 5)

We are celebrating the Octave of the Nativity of the Lord, Christmas. Sometimes Christmas is referred to as the Feast of the Incarnation. In fact, the Incarnation is much broader in its implications. The Word became Incarnate immediately upon the response given by Mary to the invitation of the Lord delivered through the Angel.

Any Nation which protects in the positive law the taking of innocent human life in the womb, calling it a “right” and a “choice” is participating in evil and promoting darkness.

He was conceived by the Holy Spirit. The moment He was conceived, the Incarnation began. Jesus Christ lived through every age and every stage of development. He is identified with every child from the moment of conception.

Medical science confirms what the Natural Law and our conscience long ago told all of us, the child in the womb is one of us. We all know it. We routinely operate on her when she needs our help and place her back in her first home of the womb until birth. We prosecute a criminal who, in committing a crime against his mother, kills him as well.

The abortion lie has been revealed in its wretched ugliness. Every procured abortion is the intentional killing of an innocent child. No-one who continues to support it is a friend of the poor. The baby in the womb is, as Mother Teresa so clearly reminded us, the “poorest of the poor”. Defenders of abortion on demand hate the poor. Any Nation which protects in the positive law the taking of innocent human life in the womb, calling it a “right” and a “choice” is participating in evil and promoting darkness.

The US Government carries on the evil of Herod by funding the killing of Holy Innocents.

The Gospel for the Mass on the Feast of the Holy Innocents reminds us of how evil infects those who fail to hear the cry of the poor and serve in government. The example given is Herod, a ruler inebriated with his own power. He ruled unjustly while claiming to be doing exactly the opposite:

“When Herod realized that he had been deceived by the magi, he became furious. He ordered the massacre of all the boys in Bethlehem and its vicinity two years old and under, in accordance with the time he had ascertained from the magi. Then was fulfilled what had been said through Jeremiah the prophet: A voice was heard in Ramah, sobbing and loud lamentation; Rachel weeping for her children, and she would not be consoled, since they were no more’.

Rachel still weeps in our day. The US Government carries on the evil of Herod by funding the killing of Holy Innocents. For example, in calendar year 2008/2009 Planned Parenthood received $363 million in government grants and contracts. This money was extracted from the US taxpayer and used to kill 324,008 children in the womb.

Planned Parenthood is built on a deadly lie. They have dressed themselves up as a “Health Care Provider” and they include the taking of the lives of innocent children in the womb as a “service” under their offering of “reproductive services”. They have insinuated themselves into the global delivery of “medical services” receiving massive government funding.

There is nothing “reproductive” about abortion. It is certainly not a service to the child, the mother, the father or society. Nor is it ever “health care”. It is feticide, the killing of children. Funding it is morally repugnant. Planned Parenthood is the leading institutional champion of a culture which has redefined “choice” to include killing young innocent human life and “freedom” to include the commission of unspeakable horrors against an entire class of people, children in the first home of the whole human race.

The Office of Readings in the Liturgy of the Hours on the Feast of the Holy Innocents offers the sermon of St Quodvultdeus, a deacon and Church father of the 5th century, entitled “Even before they learn to speak, they proclaim Christ” for our reflection today:

Every procured abortion is the intentional killing of an innocent child.

“A tiny child is born, who is a great king. Wise men are led to him from afar. They come to adore one who lies in a manger and yet reigns in heaven and on earth. When they tell of one who is born a king, Herod is disturbed. To save his kingdom he resolves to kill him, though if he would have faith in the child, he himself would reign in peace in this life and forever in the life to come.

“Why are you afraid, Herod, when you hear of the birth of a king? He does not come to drive you out, but to conquer the devil. But because you do not understand this you are disturbed and in a rage, and to destroy one child whom you seek, you show your cruelty in the death of so many children.

“You are not restrained by the love of weeping mothers or fathers mourning the deaths of their sons, nor by the cries and sobs of the children. You destroy those who are tiny in body because fear is destroying your heart. You imagine that if you accomplish your desire you can prolong your own life, though you are seeking to kill Life himself.

“Yet your throne is threatened by the source of grace, so small, yet so great, who is lying in the manger. He is using you, all unaware of it, to work out his own purposes freeing souls from captivity to the devil. He has taken up the sons of the enemy into the ranks of God’s adopted children.

“The children die for Christ, though they do not know it. The parents mourn for the death of martyrs. The child makes of those as yet unable to speak fit witnesses to himself. See the kind of kingdom that is his, coming as he did in order to be this kind of king. See how the deliverer is already working deliverance, the savior already working salvation.

“But you, Herod, do not know this and are disturbed and furious. While you vent your fury against the child, you are already paying him homage, and do not know it.

“How great a gift of grace is here! To what merits of their own do the children owe this kind of victory? They cannot speak, yet they bear witness to Christ. They cannot use their limbs to engage in battle, yet already they bear off the palm of victory.”

Every child killed by voluntary abortion is a “Holy Innocent”. Every politician who supports this killing, implicitly or explicitly, carries on the evil actions of Herod. On this Feast of the Holy Innocents let us summon a new resolve to bring an end to the slaughter of the holy innocents in this hour.

Abortion is a barbaric practice which kills children. As we approach the beginning of the year 2011 we must place at the top of the list of our resolutions bringing an end to the funding of Planned Parenthood and an end to the slaughter of the Holy Innocents.