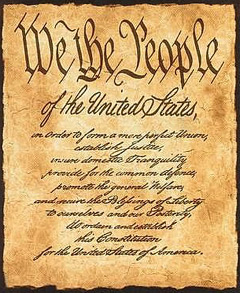 George Orwell said that the first duty of decent people was to say the obvious. So here it is for today.

The United States Constitution enshrines a far greater political philosophy than anything Karl Marx ever dreamed of in his totalitarian ideology.

In 1787, the Constitution proclaimed a political philosophy that has led to greater well-being and happiness for more people over more centuries than anything Europe’s totalitarians ever did. But precisely because the Constitution limits the greed of the power-hungry, it is always under assault. Every generation needs to understand that because human nature has not changed since 1800. Napoleon Bonaparte and Adolf Hitler are alive somewhere today, because greed for absolute power is part of human nature. Look at the absolute dictators around the world; they are no different. If we are not the brainwashed followers of a Napoleon or Hitler, it is only because our minds have not been dominated by some totalitarian ideology. That is what at stake today, just as it is in every generation.

The Constitution is best defended by reading, by evidence and logic. It needs no other defense. The United States Constitution invites you to argue against it. It guarantees your right to do so without fear of retaliation. So go for it. Argue with it, and see what your thinking leads to.

The Constitution is best defended by reading, by evidence and logic. It needs no other defense.

The United States had the historic luck of organizing itself by the Constitution, undoubtedly the greatest political achievement of the Age of Reason. It’s not that the American Founders were the only ones to understand political freedom. They learned their history from Europe, Britain, France, Russia, Rome, Greece, and the Bible. They discovered power-hungry tyrants in every single country they read about. Just read the same books they read. It’s all there. Human tyranny goes back to the Epic of Gilgamesh, six millennia ago. The biblical Book of Kings tells the same story. So does the story of Jesus. “Man is born free,” said Marx, “but everywhere he is in chains.” In the last century, 100 million people died in concentration camps and basement executions because of the totalitarian ideology peddled by one Karl Marx.

In the last century, 100 million people died in concentration camps and basement executions because of the totalitarian ideology peddled by one Karl Marx.

America gave the Founders an historic chance to put what they thought were the best ideas into actual effect. In Europe, Asia, and Africa, that was never possible, because a series of monarchs, religious terrorists, dictators, and gangsters took over after the European Enlightenment. That is why Europe still doesn’t understand the U.S. Constitution. Americans were luckier, not necessarily smarter or more virtuous. We could build anew, and we grasped our chance to do so.

The American Revolution spread freedom. Around the same time, the French Revolution brought Napoleon to dictatorial power. British thinkers like Edmund Burke were frightened by the tyranny, chaos, and suffering they saw across the Channel, and they conducted a long war against Napoleon. Napoleon proclaimed himself l’Empereur, and his bloody armies conquered nearly all of Europe. Over here, President and General George Washington just went home and was happy to leave politics behind. That’s the difference.

Slavery was not an American invention; on the contrary, it has been practiced in every settled civilization in the history of the world. Six decades after the Constitution, Abraham Lincoln officially abolished slavery in the United States, at the cost of 600,000 soldiers who died in the Civil War. If anybody tells you the Civil War wasn’t fought about slavery, try this book by a real historian. The Civil War burned out a whole generation of Americans, many of whom started out as passionate abolitionists. Then they died or saw their friends die in the Civil War. Oliver Wendell Holmes was forever burned out by his experience in the Civil War.

You don’t spread love, peace, and happiness by having the President of the United States bowing ostentatiously to all the tyrants of the Old World.

You don’t spread love, peace, and happiness by having the President of the United States bowing ostentatiously to all the tyrants of the Old World. You spread peace and happiness by explaining the Constitution and its philosophy to all who care to hear. If half the Marxist professors in our colleges bothered to read the Constitution, we could spread enlightenment around the world. Then all the people who live in tyranny could take care of their own power parasites.

Americans don’t talk about the Constitution nearly enough. We should put copies in every hotel room, next to the Gideon Bible. Let all the Marxists and Muslims in the world read it. It’s easy to understand. Then let them think for themselves.

Why isn’t that obvious? Apparently it’s not to a lot of Ivy-League sophisticates. It isn’t that they are unintelligent — they’ve just been taught to close their minds.

PC indoctrination really works. If you doubt that, try contradicting a liberal.

The American Founders didn’t know that books and newspapers were Organs of Propaganda. If you thought you were being lied to, you dropped that broadsheet and found a better one. Or you printed one of your own, like Ben Franklin did.

Being lied to every day is a deep insult to a proud people. I feel personally insulted every time I see another lie in the media. I feel worse when I see other people who just suckle on it like it’s mother’s milk.

The Founders were journalists as well as political philosophers. They wrote for the ages. They tried their best not to lie. They understood a basic truth about human beings, which is why they wrote the Constitution, the Declaration of Independence, and the Federalist essays.

Americans don’t talk about the Constitution nearly enough. We should put copies in every hotel room, next to the Gideon Bible. Let all the Marxists and Muslims in the world read it. It’s easy to understand. Then let them think for themselves.

But then, the Founders were not born and raised in Prussia, like Karl Marx. In his own mind, Marx never left Berlin, which was run by a Junker caste when he grew up. The Junkers loved to march in whole legions, complete with their funny little pointed helmets and big mustaches. But it’s a lot funnier if you don’t have to face that arrogance at the point of a bayonet, as the French did in the Franco-Prussian War, World War I, and World War II.

Marxism is a foreign import into the United States, an infectious plague bacillus, but it has grown on our academic soil, which loves everything European and sneers at America. Our professors are supremely ignorant of history, maybe because their need to feel better than others makes it impossible for them to see the world as it is.

When and where he was taught to shut his mind to it is an interesting question. But it’s not important. Most of the other guys and gals at the WaPo don’t understand it, either.

It’s not what they know, but what they shut out of their minds. Liberals don’t need censorship, because they censor their own thoughts. They just refresh their barnacled prejudices every day at the eternal wellspring of the New York Times and the WaPo. Read it over breakfast and you don’t need to another idea for a whole day.

So just for Dana Milbank, I have this novel thought:
The purpose of the U.S. Constitution, Dana, is to protect us from people like you.

Now repeat that twice a day. Write it on your bathroom mirror so you can read it every time you look at yourself.

About 100 million Americans understand the philosophy of the Constitution extremely well. They understand it from their own lives. It’s not hard. These are the voters who turned against the Democrats in November.

I know this is difficult for you, Dana. All the same, if you make it your daily mantra for the next couple of years, twice a day for half a minute, you might get it.

Plus, you’ll enjoy looking in the mirror.

And even if you never understand the U.S. Constitution, Dana, you’ll just be the same guy you are today.

So you’ve got nothing to lose.