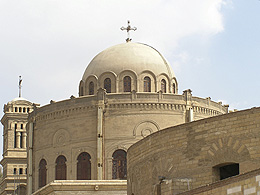 by James Lewis – On January 1, 2011, a hugely important terror attack took place in Egypt that you probably were not told about. A terrorist bomb went off at the al-Qiddissin (Saints) Church in Alexandria, Egypt, killing innocent civilians in the usual ruthless and bloodthirsty manner. The Western media hardly noticed, but the shock waves rippled through the Muslim and Christian Orthodox world.

The Coptic Church in Egypt traces its origins back to the Apostle Mark in A.D. 42. It is one of the earliest churches with a continuous history from the beginnings of Christianity, which rose several centuries before Mohammed and Islam. In Egypt, the Coptic Church has survived as a symbol of coexistence between the major institutions of Christianity and Islam. The Coptic Church is identified not only with Egypt as a country, but also with the other Orthodox Churches, including the Greek, Armenian, Bulgarian, and Russian Churches.

Two days after the bombing, on January 3, Hani Shukrallah, the editor of the Cairo daily Al Ahram, who is a Copt by family origin, published an English-language editorial titled “J’Accuse!” — an echo of Emile Zola’s famous pamphlet “I Accuse!” that triggered a political storm in France in the Dreyfus Case just before 1900.

This is an extremely important development. It is the enlightened half of Egyptian society finally speaking out loud against Islamic reactionary violence.

“I am no Zola, but I too can accuse. And it’s not the bloodthirsty criminals of Al-Qaeda or whatever other gang of hoodlums involved in the horror of Alexandria that I am concerned with.

“I accuse a government that seems to think that by outbidding the Islamists it will also outflank them.

“I accuse the host of MPs and government officials who cannot help but take their own personal bigotries along to the parliament, or to the multitude of government bodies, national and local, from which they exercise unchecked brutal, yet at the same time hopelessly inept, authority.

“I accuse those state bodies who believe that by bolstering the Salafi (reactionary Islamic) trend they are undermining the Muslim Brotherhood, and who like to occasionally play to bigoted anti-Coptic sentiments, presumably as an excellent distraction from other more serious issues of government.

“But most of all, I accuse the millions of supposedly moderate Muslims among us; those who’ve been growing more and more prejudiced, inclusive, and narrow-minded with every passing year.

“I accuse those among us who would rise up in fury over a decision to halt construction of a Muslim Center near ground zero in New York, but applaud the Egyptian police when they halt the construction of a staircase in a Coptic church in the Omranya district of Greater Cairo.

“I’ve been around, and I have heard you speak, in your offices, in your clubs, at your dinner parties: ‘The Copts must be taught a lesson,’ ‘the Copts are growing more arrogant,’ ‘the Copts are holding secret conversions of Muslims’, and in the same breath, ‘the Copts are preventing Christian women from converting to Islam, kidnapping them, and locking them up in monasteries.’

“I accuse you all, because in your bigoted blindness you cannot even see the violence that you are committing [against] logic and sheer common sense; [you cannot see that while] you accuse the whole world of using a double standard against us, [you are] wholly incapable of showing a minimum awareness of your own blatant double standard.”

“I Accuse the Liberal Intellectuals, Both Muslim and Christian

“And finally, I accuse the liberal intellectuals, both Muslim and Christian who, whether complicit, afraid, or simply unwilling to do or say anything that may displease ‘the masses’, have stood aside, finding it sufficient to join in one futile chorus of denunciation… even as the massacres spread wider, and grow more horrifying.

“A few years ago I wrote in the Arabic daily Al-Hayat, commenting on a [an article by a] columnist in one of the Egyptian papers. The columnist, whose name I’ve since forgotten, lauded the patriotism of an Egyptian Copt who had written that he would rather be killed at the hands of his Muslim brethren than seek American intervention to save him.

“Addressing myself to the patriotic Copt, I asked him a simple question: where does his willingness for self-sacrifice for the sake of the nation stop? Giving his own life may be quite a noble, even [a] laudable endeavor, but is he also willing to give up the lives of his children, wife, mother? How many Egyptian Christians, I asked him, are you willing to sacrifice before you call [for] outside intervention? A million, two, three, all of them?

“Our options, I said then and continue to say today, are not so [few]… that we are obliged to choose between having Egyptian Copts killed, individually or en masse, and running to Uncle Sam. Is it really so difficult to conceive of ourselves as rational human beings with a minimum of backbone, so as to act to determine our fate, the fate of our nation?

“That, indeed, is the only option we have before us, and we better grasp it, before it’s too late.”

Soon after Obama’s inauguration, he found an opportunity to speak from Cairo’s version of the Muslim Vatican to the Islamic world. Obama apologized for the United States and the West, and the Islamic radicals took it as a symbolic surrender. They have grown stronger and stronger since that time. The Turks have now gone over to ally with fundamentalist Iran, a true martyrdom killer regime. The Syrians have signed a treaty with Iran and tried to build their own nuclear technology. The Saudis are now panicked because they can see Iran’s nuclear weapons and power plants rising just fifty miles from their shores. Israel is preparing for a major war with Iran and Iran’s proxies in Lebanon and Gaza.

What’s been missing is a courageous modernist voice in the Muslim world.

Without that, nothing can be accomplished. Human institutions can reform only from within.

Hani Shukrallah’s courageous editorial in Al Ahram may be that crack in the wall of fear and intimidation that has ruled the Islamic world since reactionary Khomeinism took over Tehran thirty years ago.

The United States and the West must support brave modernists who don’t want to see their own countries fall back to the Ottoman Empire, five centuries of terror and darkness, as the West forged ahead with the Industrial Revolution. Muslim modernists defeated reactionaries in the early 20th century, in Egypt, Syria, Iraq, Iran, Pakistan, and Turkey. But in the last thirty years, the United States has kowtowed to the most reactionary and backward elements in Muslim society.

We must seize this moment. The Green Movement in Iran needs our support and encouragement. Modernists in Pakistan, Iran, Iraq, and Egypt need our help. If that means supporting an enlightened military establishment in those countries, so be it. Militaries are not inherently evil. They have been instruments of enlightenment throughout the Muslim world.

It is high time for the Obama administration to see the light and act without kowtowing to the maniacs who attacked us on 9/11/01. It has been almost ten years since that time, and America’s political class is still undecided. But the American people understand, and they will throw out any politician who keeps signaling weakness to the reactionary radicals in Jeddah or Tehran.

Take a stand, Mr. Obama. Don’t let freedom-loving people in the Muslim world go without our help, the way the Green Movement was slaughtered in the streets of Tehran just last year. Muslims are not destined to be the backward victims of a thousand-year-old tyranny. That is a leftist conceit. Muslim women and men want to be free.

Don’t blow the chance to stand for freedom that you’ve been given. If an Americna black president does not understand freedom, then he does not deserve his office. Make way for people who do.

We need America to speak up confidently for all the values you profess to believe in.

3 thoughts on “Prominent Coptic Editor in Egypt: ‘I Accuse!’”